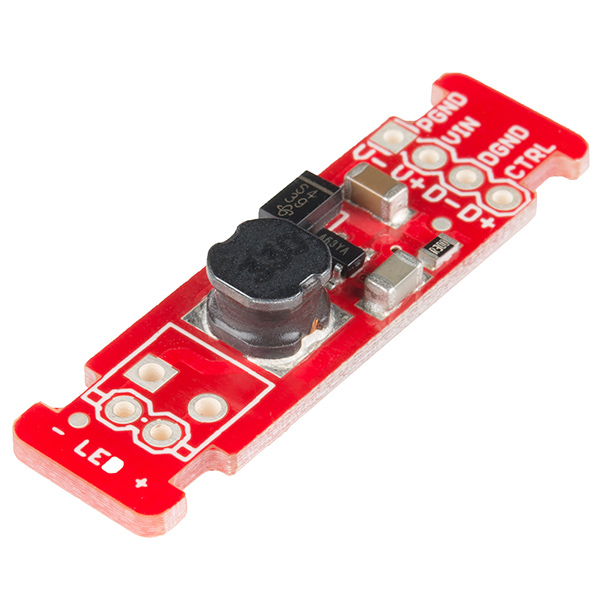 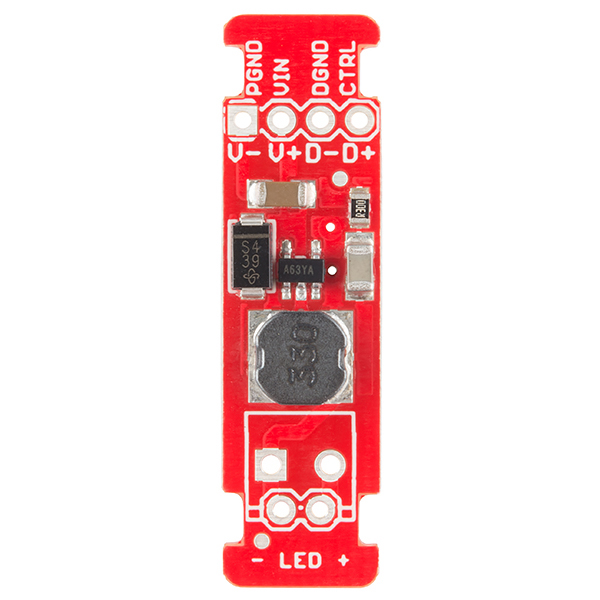 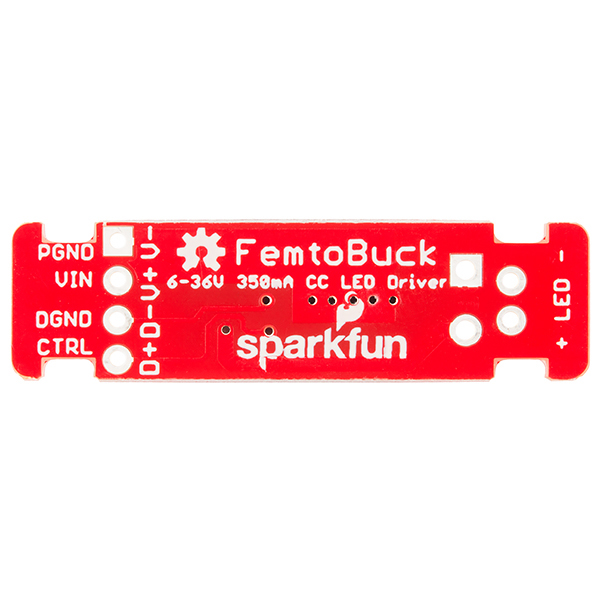 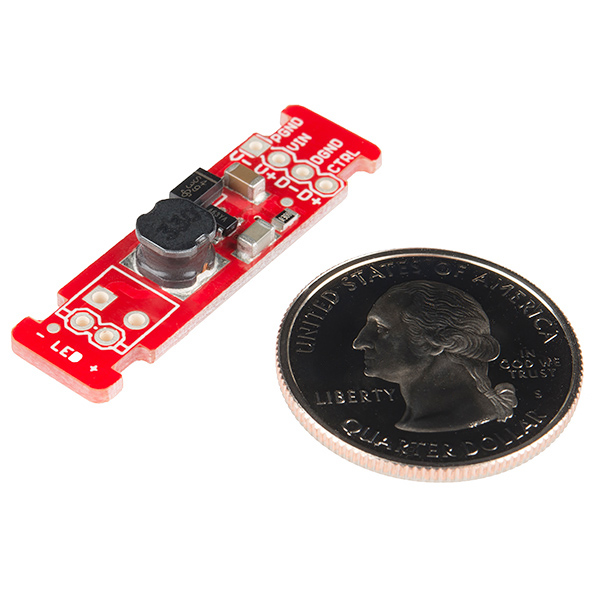 This is the FemtoBuck, a small-size single-output constant current LED driver. Each FemtoBuck has the capability to dim a single high-power channel of LEDs from 0-350mA at up to 36V while the dimming control can be either accessed via PWM or analog signal from 0-2.5V. This board is based off of the PicoBuck LED Driver, developed in collaboration with Ethan Zonca, except instead of blending three different LEDs on three different channels the FemtoBuck controls just one.

For the FemtoBuck, we’ve increased the voltage ratings on the parts to allow the input voltage to cover the full 36V range of the AL8805 driver. Since the FemtoBuck is a constant current driver, the current drawn from the supply will drop as supply voltage rises. In general, efficiency of the FemtoBuck is around 95%, depending on the input voltage. On board each FemtoBuck you will find two inputs for both power input and dimming control pins and an area to install a 3.5mm screw terminal. Finally at either side of the board you will find small indents or "ears" which will allow you to use a zip tie to secure the wires to the board after soldering them down.

Learn how to use the SparkFun Touch Potentiometer to control lighting, volume or other inputs in your daily life.
Favorited Favorite 5

Drive LED's with the SparkFun FemtoBuck!

Skill Level: Noob - Programming will be limited to basic drag and drop interfaces like ModKit or Scratch. You won't be writing code, but you will still need to understand some basics of interfacing with hardware. If you?re just using a sensor, it's output is analog.
See all skill levels

about 6 years ago by Rob Purser verified purchaser

I used 8 of these to control 48 of the 3W LEDs in my Internet connected fundraising sign. Works great! I had 6 LEDs arraigned in 2 parallel chains of 3, and fed it 12V. Did a great job keeping all the LEDs in the system at the same intensity. Works just as described. It's be nice to have an alternate version that can drive the 3W LEDs at the full rated power without modification.

about 6 years ago by TacticalSnack verified purchaser

Nice and easy to get going, it's like someone's holding my hand! Just one thing, anyone have noise under load when you're PWM'ing this thing? I've got 5 of the cool white led's with al pcb's hooked up in series.

about 6 years ago by Member #53061 verified purchaser

I bought this for adding approach lights to my car. A FemtoBuck and a couple of 3W warm white LEDS. It works great on the bench and if it ever stops snowing or warms above freezing it will get a proper install. Thank you!

Modified to my needs and working fine

about 6 years ago by Member #57482 verified purchaser

I changed the R1 resistor to 0.2 ohms to boost it to 500mA output then added a circuit to adjust the CTRL pin with a pot from 0.5V to 2.5V for some under cabinet lighting. The pot adjusts brightness approx. half to full brightness which is what I wanted. Works great although upping the R1 resistor to 0805 size instead of 0603 would make it easier to replace since there is real estate on the PCB for it.

Efficient and easy to dim

about 6 years ago by Member #26581 verified purchaser

Dims easily with an ATtiny85 microcontroller. Appears to be very efficient.

about 6 years ago by Member #484622 verified purchaser

used this with a couple of 3W Aluminum PCB LED's - like suggested in the video - to build a simple light for the kitchen counter. Only four stars, because with would not be able to replace sense resistor for boosting the LED current. The resistor is much too small for my soldering skills. It would be perfect, if I could add a through hole resistor.

exactly what i needed

about 6 years ago by ndrew verified purchaser

was trying to build led light for my work area, and this works perfectly.

Worked well to drive an unknown string of led's

about 6 years ago by Tboy555 verified purchaser

I used the femtobuck to drive an unknown qty (probably 20-25) multicolor led's. It works well, and does not even get warm. I'm supplying 9vdc to the femtobuck.

about 6 years ago by Honus verified purchaser

A nice little board that works exactly as advertised. I'm using it to drive two high power LEDs and dim them via radio control and I have zero problems with it.