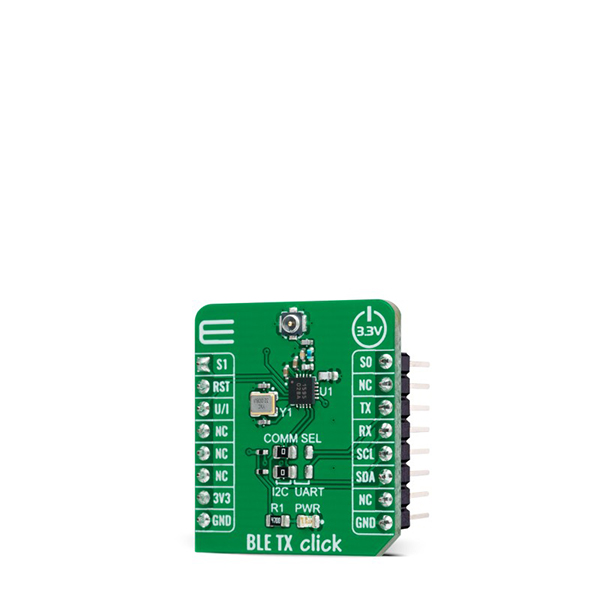 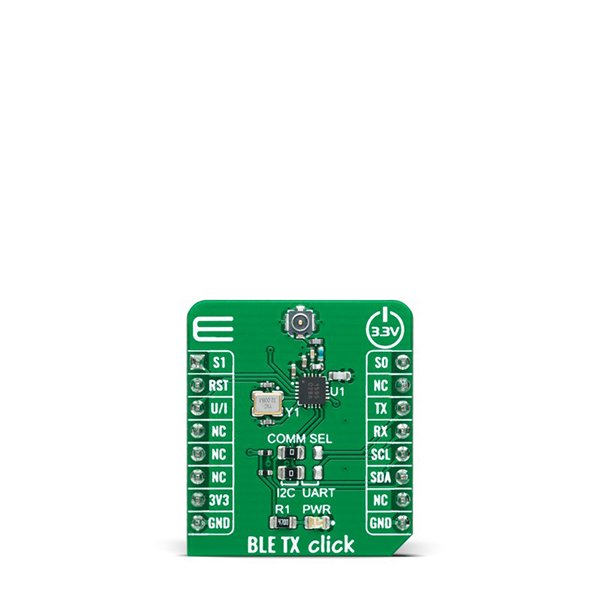 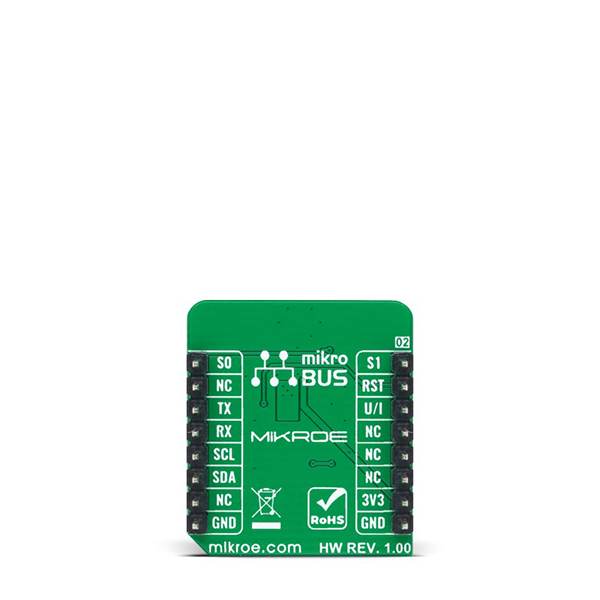 BLE TX Click is a compact add-on board that contains a low-energy Bluetooth transmitter. This board features the AK1595, a Bluetooth 5.2 transmitter with incorporated proprietary algorithm software from AKM Semiconductor. The AK1595 transmitter simplifies wireless connectivity to a system with no need to develop complicated, proprietary microcontroller code. Bluetooth Low Energy compliant advertising transmission can be achieved by simply configuring the transmission power, data, and transmission start-trigger via the UART or I2C interface. This Click board™ is suitable for general data transmission applications such as thermometers, blood pressure monitors, weight scales, toys, pet supplies, IoT sensor nodes, and more.

BLE TX Click as its foundation uses the AK1595, a low-power Bluetooth 5.2 transmitter from AKM Semiconductor. The AK1595 incorporates proprietary algorithm software and can achieve Bluetooth Low Energy transmitter (BLE TX) functionality without a particular development environment and programming required for conventional Bluetooth SoCs. The BLE function can be realized by simply setting the data to be transmitted to the built-in register, making it ideal for applications that add the BLE function to existing microcomputers.

BLE TX Click provides the possibility of using both UART and I2C interfaces. The AK1595 configures its selected interface via three GPIO pins labeled as U/I, S1, and S0 routed on the CS, AN, and PWM pins of the mikroBUS™ socket. In addition to the I/O pin on the mikroBUS™ socket, which activates a particular serial communication based on the set logical level, this Click board™ also has two jumpers intended for the hardware interface selection itself. The choice can be made by positioning SMD jumpers labeled as COMM SEL to an appropriate position. Note that all the jumpers' positions must be on the same side, or else the Click board™ may become unresponsive.

When the UART interface is selected, the UART controller block is initialized when the S1 pin detects low logic state for more than 1μs. Also, by setting a specific logic level on pin S0, the user can set the baud rate of the UART communication itself (set S0 to a low logic state for 9600bps or S0 to a high logic state for 115200bps). The I2C interface of AK1595 supports the Standard with a clock frequency up to 100kHz and the Fast Mode up to 400kHz. Also, this Click board™ has a Reset pin routed to the RST pin on the mikroBUS™ socket, which holds registers in their default states until the RST pin is set to a logic low state.