Retired COM-12027 RoHS 8
Note: Retired Product
This is a retired product. There is an updated version available: COM-15205 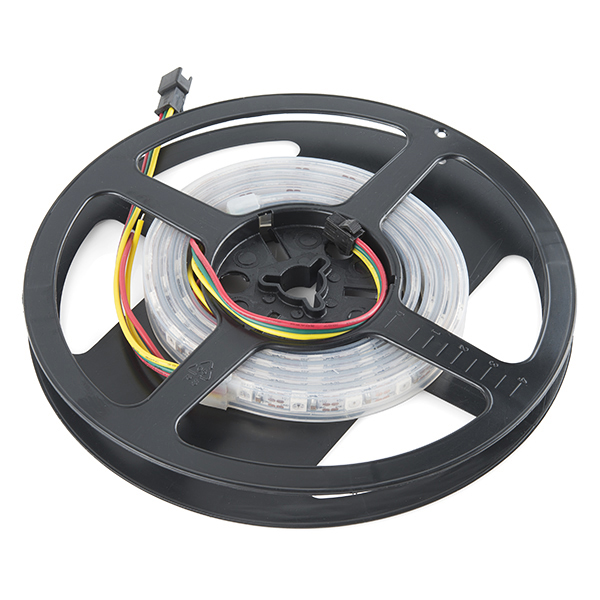 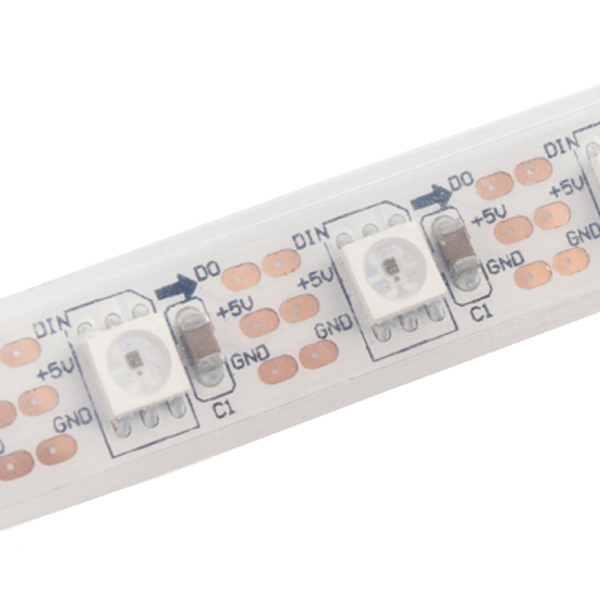 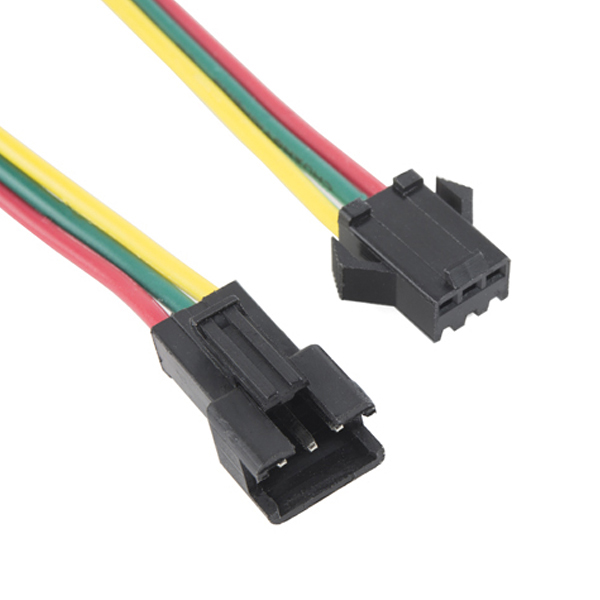 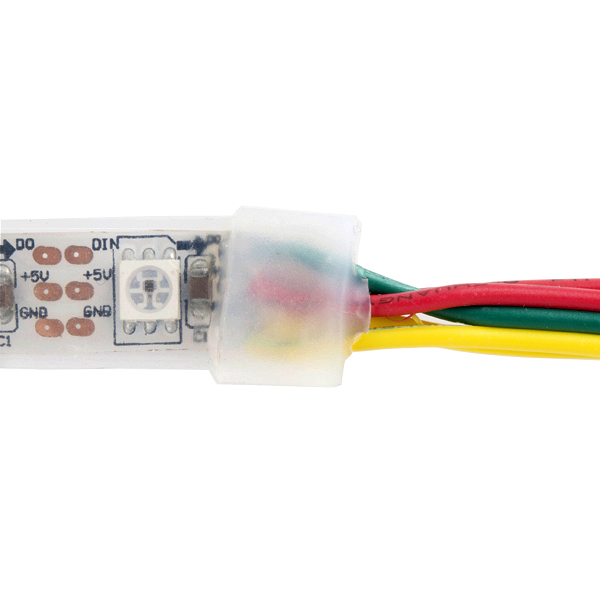 Retired COM-12027 RoHS
8
Note: Retired Product
This is a retired product. There is an updated version available: COM-15205

Gone are the days that you have to worry about silicone weather proofing splitting and breaking on you! These are sealed addressable 1 meter long 5V RGB LED strips that come packed with 60 WS2812s per meter. Each of these strips are enclosed by a flexible silicon jacket with an IP65 waterproof rating to protect your precious WS2812 LEDs. You will be able to control each LED RGB individually giving you the ability to create cool lighting effects for your car, fish tank, or perhaps under cabinet lighting in your kitchen!

Note: These come in 1m segments on a reel. They are preterminated with 0.1" spaced 3-pin connectors as well as a 2 wire power connector, as shown in the pictures.

Hackers in Residence - Sound and Motion Reactivity for Wearables

How to consciously wear light-up and and sound reactive clothing.
Favorited Favorite 14

All the information you need to use the Spectacle Light Board in one place.
Favorited Favorite 2

Learn what it takes to build large LED installations from planning to power requirements to execution.
Favorited Favorite 20

Use an Arduino and the SparkFun Sound Detector to create visualizations on Addressable RGB LED strips.
Favorited Favorite 27

This tutorial provides everything you need to know to make your own light up high top sneakers!
Favorited Favorite 21

In this tutorial, we will be connecting a Mean Well LED switching power supply to an addressable LED strip controlled by an Arduino.
Favorited Favorite 3

Using Artnet DMX and the ESP32 to Drive Pixels

In this tutorial, we'll find out how to use Resolume Arena, a popular video jockey software, to control custom-made ArtNet DMX fixtures.
Favorited Favorite 10

How to create a pixel string with the WS2812 and WS2812B addressable LEDs!
Favorited Favorite 9

Very easy to work with

about 7 years ago by Member #643984 verified purchaser

We're using these strips for a Bike wheel POV lighting system and we have had no problems so far. Only thing that would be nice is a way to ensure waterproofing after cutting the strips, since we couldn't use them at their 1M length for this project. The neopixel library in combo with an arduino work great, very satisfied.

I love these things

about 7 years ago by Member #652772 verified purchaser

These LEDs are awesome! They are bright as hell and the code to control them is pretty straight forward. Fun!

Works Out of the Box

about 7 years ago by richmund verified purchaser

The lights worked great (the package said to use 5V but that was too much, 3.3V works). Used the neopixel library which was already ported to the spark pixel. Very professional. Plenty of examples and explanations on how to use the code.

about 7 years ago by mrSparkle verified purchaser

you can program the individual led units however you want. the strip is very flexible. i haven't tested it in rough environments but the weatherproofing does seem to be of good quality. note: the strip i received had a 3m adhesive backing (glue already on with peel-off), which can be either a big plus if your project requires it or a big minus if your project is better off without it.

Much more awesome than I expected!

about 6 years ago by Member #768106 verified purchaser

I just love this chain of lights with fantastic colors. Beautiful and easy to use, especially with the hookup tutorial that comes with this product!

about 6 years ago by Member #794880 verified purchaser

Works exactly as I expected and is very easy to program with an Arduino, especially when using the available libraries.

Easy to program with library

about 4 years ago by jcsquire verified purchaser

Minimum needed to get this working: 1) LED strip 2) Arduino 3) 3-pin Connectors sold for the LED strip 4) 6 or 7V battery pack (I used a slighly out of spec 7.2V NiMh, although two 3V Lithium batteries would work well) 5) Connectors for the batteries that terminate in a connector pin that will fit into the Arduino header

Gotchas: 1) Be careful not to try to power the strip from the regulated +5V output of the Arduino like I did or you will fry the Arduino power supply...also like I did. It will take a few minutes, but it will happen. At 20mA per LED x 50 LEDs, it uses 1A when all the lights are on! 2) My suggested hardware wiring pipes in power from the battery to the Arduino Vin. That input is not diode-protected; if you accidentally reverse the battery polarity (easy to do with the non-standard yellow for ground), the Arduino will instantly toast.