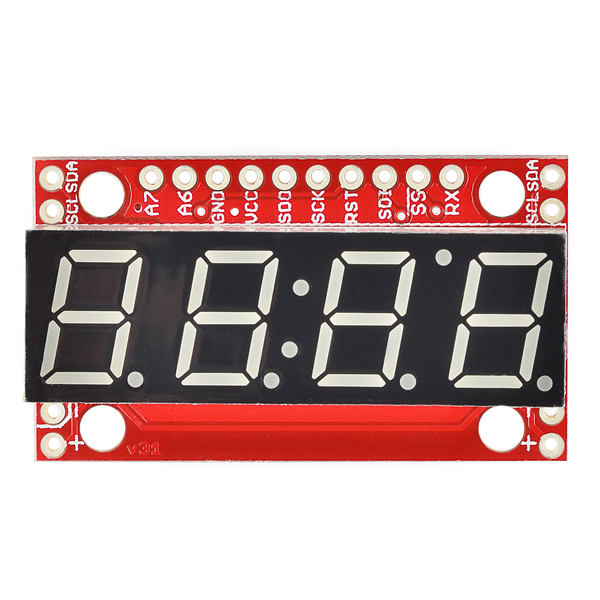 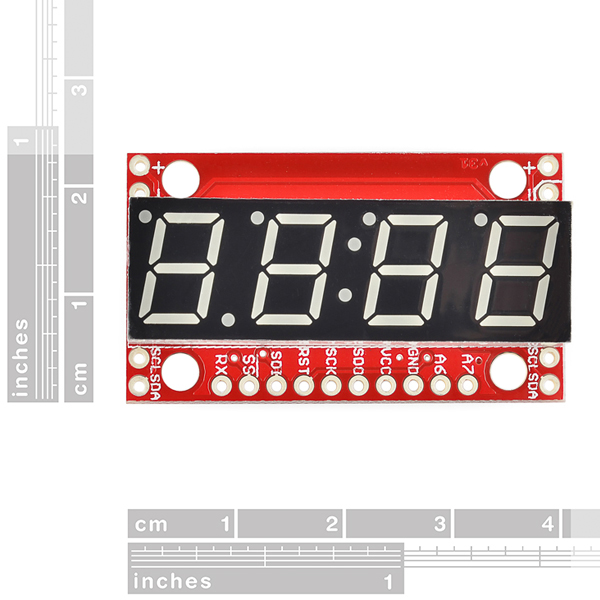 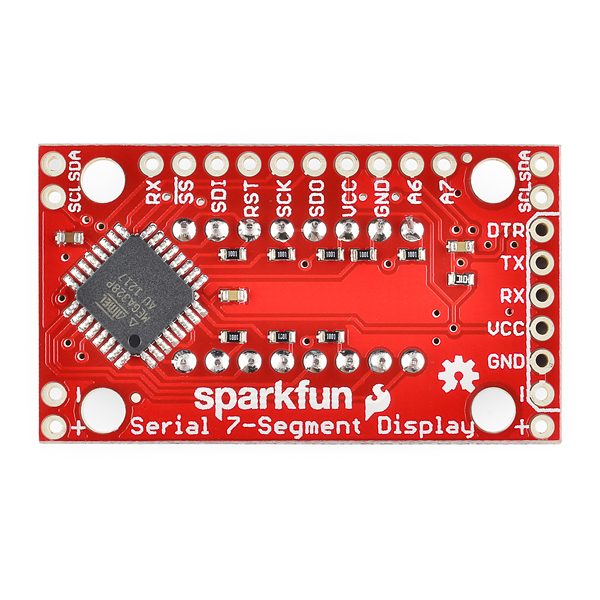 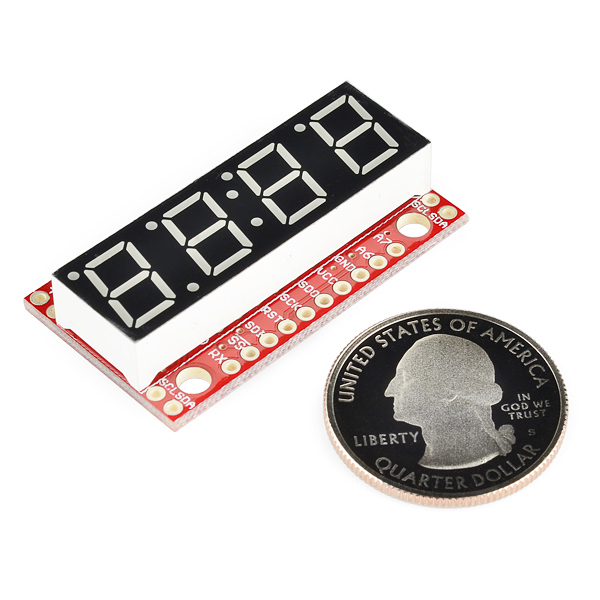 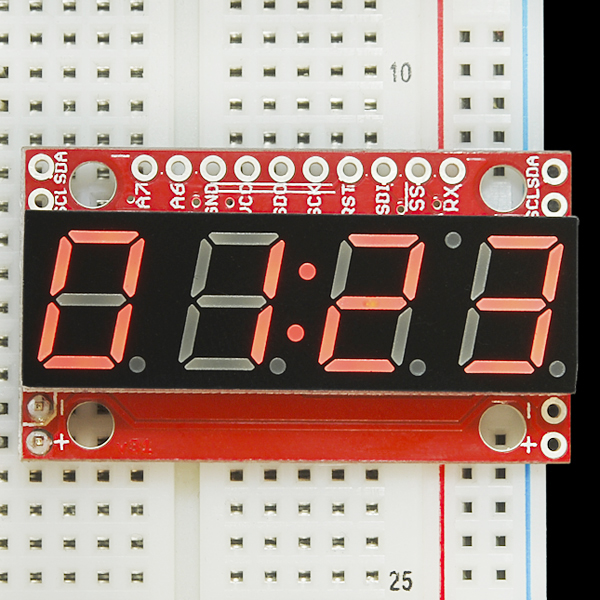 4-digit 7-segment displays are really neat little devices, it's a shame that they can be so cumbersome to control. Well we've solved that problem by making them a little bit "smarter." The SparkFun 7-Segment Serial Display combines a classic 4-digit 7-segment display and an ATMega328 microcontroller allowing you to control every segment individually using only a few serial lines.

The Serial 7-Segment Display can be controlled in one of three ways: Serial TTL communication, SPI serial communication or I2C serial. You can even program it for stand-alone operation since the ATMega328 comes pre-loaded with the Arduino bootloader! There is also an FTDI header on board and we've provided a hardware profile for the Arduino IDE to make it even easier to program.

We've made some layout changes to this design as well which will make it easier to incorporate these into your project. We've moved the power and I2C pins to the sides of the board such that you can chain them together in order to display longer strings of digits. We've also added mounting holes to the boards so you can mount them on standoffs (no more hot glue!)

This tutorial will show you how to make a scale that logs your weight to a custom website on the Internet. The principles can be extrapolated to any type of data.
Favorited Favorite 8

A playful, geeky tutorial for a leather bracer that uses a LilyPad Arduino, LilyPad accelerometer, and seven segment display to roll virtual 4, 6, 8, 10, 12, 20, and 100 side dice for gaming.
Favorited Favorite 9

Learn how to use serial I2C and SPI buses on your Raspberry Pi using the wiringPi I/O library for C/C++ and spidev/smbus for Python.
Favorited Favorite 23

about 7 years ago by Member #716040 verified purchaser

A previous comment indicated dim output. With a 5 V Arduino Uno this was very bright. I actually cut back a little on the brightness by setting it at about 75% through the software. I found the documentation pretty good. I had to get more information, but that was because I'm not very good at serial protocol. I think this is a good product and will be ordering a couple more for some other projects. Thanks.

about 6 years ago by Member #477885 verified purchaser

I used this for a clock/thermometer running from a PI 3. The serial TTL was very easy to interface. Adjustable brightness was useful. I would have liked a slightly larger display but that was not available.

about 4 years ago by Member #875338 verified purchaser

Used two I2C controlled displays. So easy to use thank to the Wire library.

The only drawback: a weird letter "P", looking as an inverted "g", easy to correct by code.

about 6 years ago by 42designfab verified purchaser

As an exhibit designer/fabricator, I use these things quite often. They're flexible (I usually use either SPI or I2C) and robust. Together with the big-brother version (COM-11644) they are very useful anyplace we need digital timers/displays.

about 6 years ago by Elecdonia verified purchaser

I got a red one and a green one. These are great! I've tried out about 1/2 of the features so far. One thing that's really useful is that is has both decimal points and a colon. Whenever I need a small 7-segment display I'll use one of these

about 6 years ago by Member #548774 verified purchaser

Easy to set up.

These 7segment serial displays are truly a game changer!

about 6 years ago by Member #496534 verified purchaser

They are easily adaptable to many projects regardless if your using Arduino or Raspberry Pi control platforms...Plan to use them in my customized hand controls for years to come!👍 Vic Rizzo RIZZO CONTROLS LLC

about 6 years ago by Member #876728 verified purchaser

I have good control with I2C with this right now. But be warned is a bit sensitive to static and noise. Since I decided to write a clock in VB6 for testing this, constantly updating the display (every 100 ms move decimal point, and every half second flash colon) when I moved with with my hand it apparently got garbled. Since I was using an Ardvark interface, and had the pull up's on it turned on, maybe I should have had resistors on the end near the board instead. But what happened is somehow it read it as a change I2C address. So I wrote a change to my vb program and found it had changed to address 181, which I found interesting.

None the less a fun and very inexpensive display to work with.

Also wish intensity control 0 would be totally off and not have to blank the display if you want it all not be be seen. But this is a personal preference. And most likely I could rewrite the software to do this myself.

The nice thing about this is the excellent documentation. I may use these chips for replacement where I would normally use a MAX1447/MAX1496/MAX1498 as a volt meter display or a MAX7219 display controller in some things I build. Will be working with some A/D and use the source code and have a bit more fun with this chip and software.
Only suggestion would be to add pad's to SCL SDA to add resistors to board if its on the end of a chain.

about 5 years ago by Member #902011 verified purchaser

This worked perfectly for my project. I only wish there was a bezel for it with a lens to make my project look a little nicer.

about 3 years ago by Kiko Lobo verified purchaser

about 7 years ago by Member #207774 verified purchaser

Good reliable displays, way too dim Though. This can be overcome by either using thier conductive paint and painting across the resistors on the back, or, by using some goopy solder and bridging across. Stock they are far too dim, unreadable and usless in daylight. The older model they used to have was far better Sparkfun told me the resistors were an improvement on the new design, but if uou can't read the display anymore... well.... that is sort of the purpose of them

Greetings. These displays can take anywhere from 3.0V to 5.5V and will increase in brightness with increased voltage(up to 5.5v). The resistors are current limiting resistors designed to protect the segments and as a result will make segments dimmer but increase the lifespan of each segment. Bypassing these resistors or removing them and adding a solder bridge can cause the segments to fail sooner. If you believe that you may have received a defective product please contact Techsupport@SparkFun.com.

A review per request

about 2 years ago by Busa verified purchaser

The display worked on my first attempt. I have some complaints though. There was a marker mark on the side of the display that appeared to be used to identify the color of the LEDs, and this took away from the clean look. Next, the firmware that is available on Github is basically unusable because it is so far out of date. The library that was used does not match the provided code.

I am working on rewriting the firmware so that the display can read a button press, and report back using Serial. I think that I can do it but is taking some work.

Overall, it is a nice display, and would be perfect if you only want to use the provided programming. I would buy another if I get the firmware issue resolved.

about 7 years ago by Beto Arango verified purchaser

This is an excelent displaylights up well and looks cool. I purchased it among other things because I wanted to use it's aditional capacities as an arduino.. It would allow me to set up a simple display of an analogue sensor connected to A6 and A7. In my case a ready button and a Alcohol sensor- breathalyzer.. sort of lets pretend-its-just-a-joke-but-really-get-a-serious-point-across sort of deal for my christmas/New year parties regarding people drinking and driving. However I have been unable to understand how to plug this in as an arduino...I have the ftdi, and have looked at the examples but Im not really sure what I should know in order to learn.... Downloaded and looked at the Aduino-addon but i have no idea what to add-on this to...

Handy sized and bright colour. Many different ways to control. On-board atmega is handy too.