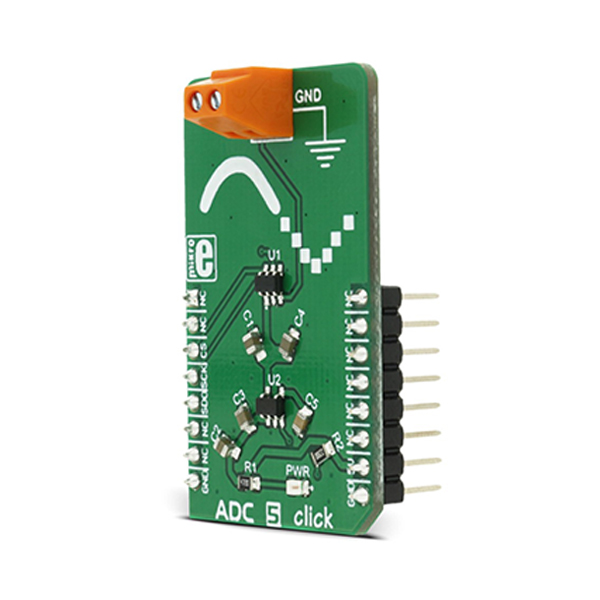 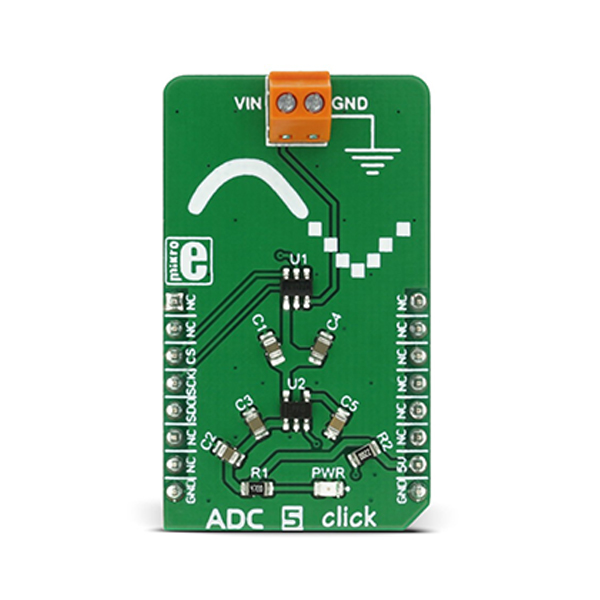 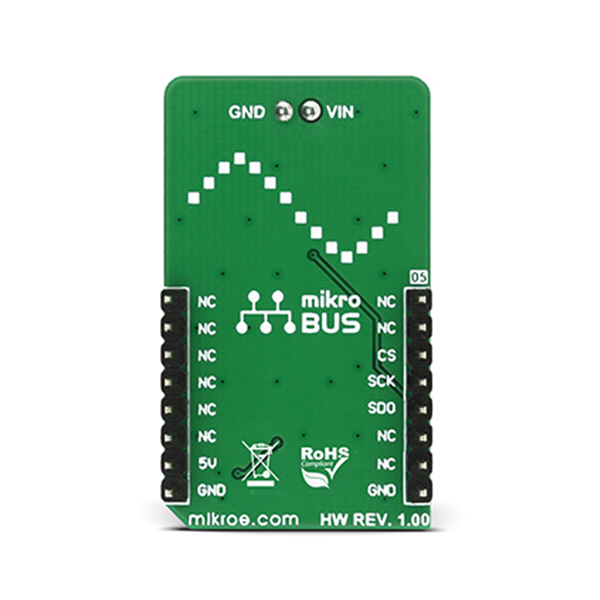 ADC 5 Click is a Click board™ used to sample an analog voltage on the input and convert it to a digital information. ADC 5 Click is equipped with the ADC121S021, a low power, single channel 12-bit CMOS analog to digital converter (ADC), with a high-speed serial interface. This device uses the SAR algorithm for sampling the input voltage which, coupled with relatively high bit depth, gives a pretty accurate digital reconstruction of the input voltage. The main feature of this ADC device is its continuous reliability over a wide range of sample rates. The functional specifications are maintained in the range from 50kSPS up to 200kSPS. It performs according to specification over the whole range, maintaining a good linearity and high signal to noise ratio up to 72dB, typical.

The features such as the low power consumption, two operational modes used to fine-tune the overall performance vs power consumption, consistency over a wide range of sampling frequencies, industry standard SPI communication interface, make this device a perfect solution for using it in various applications which depend on linear and accurate analog-to-digital conversion, such as the instrumentation and control applications, conversion of the analog data from various sensors, remote data acquisition, and similar.

The device uses the SPI communication. The MOSI pin does not exist, since no communication from the MCU to the Click board™ is going on. The reading speed, also known as the sample rate, directly depends on the clock rate of the SCK line. The sample rate over which the specified electrical performance is ensured is 50 Ks/s to 200 Ks/s. The ADC121S021 has the ability to use any clock signal frequency up to the rated maximum frequency, with no significant deviations from the specifications stated in the datasheet: it is specified over a wide range of sample rates, maintaining a good linearity and high signal to noise ratio (SNR).

In general, ADC (analog to digital converters) are the most commonly used devices for converting the voltage signals into an information, which can be then processed in the digital domain. There are many types of ADC converters commercially available. They can vary in bit depth, sample rate, used approximation algorithm (SAR, delta-sigma...) and so on. Those attributes affect how accurately the sampled voltage will be translated into the digital world.

The ADC Click board™ is also equipped with the screw terminal which can be used for easy and secure connection of the input voltage rail. Although the reference voltage is 3.3V, it is powered only by the 5V rail from the mikroBUS™, used as the input for the LDO regulator.