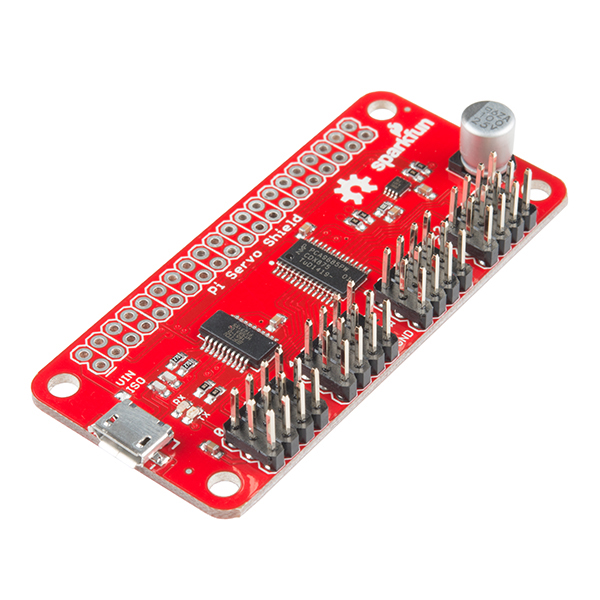 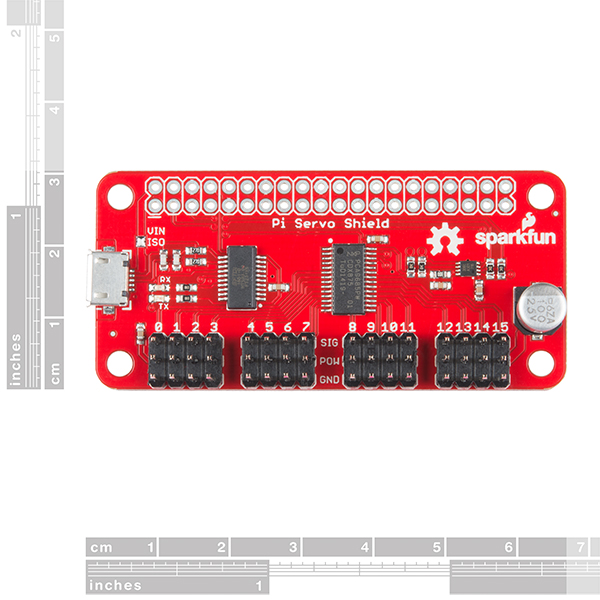 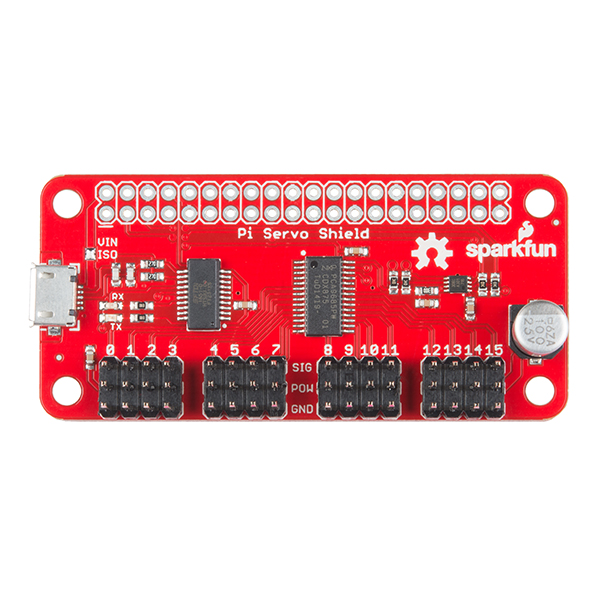 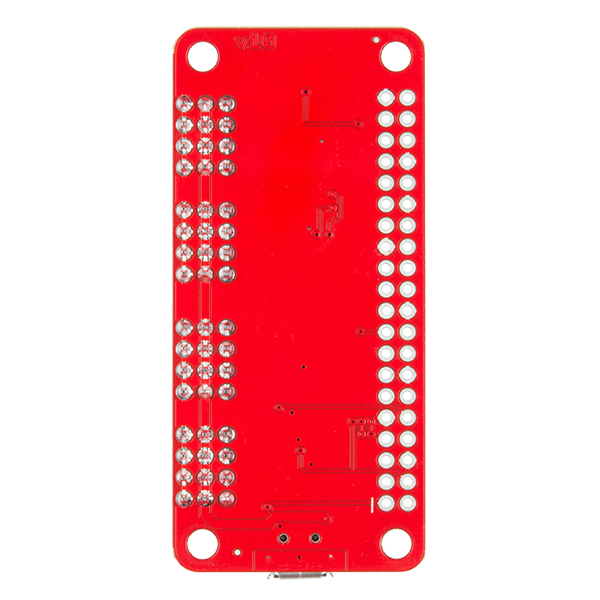 The SparkFun Pi Servo HAT allows your Raspberry Pi to control up to 16 servo motors in a straightforward and uncomplicated manner via an I2C connection. Thanks to its I2C capabilities, this PWM HAT saves the Raspberry Pi's GPIO, allowing you to use them for other purposes. Additionally, the Pi Servo HAT adds a serial terminal connection, which will allow you to bring up a Raspberry Pi without having to hook it up to a monitor and keyboard.

Power to the SparkFun Pi Servo HAT is supplied by a microUSB connector that can be used to power the servo motors only, or to power the servo motors as well as the Pi that is connected to the HAT. This USB connector can also be used to hook up the Pi via serial port connection to avoid having to use a monitor and keyboard for setting up the Pi. To supply power only to the servo power rail (and not the Pi's 5V power rail), you just need to remove a small blob of solder on the isolation jumper. Doing this allows you to drive heavier loads coming from multiple or larger servos.

Each of this HAT's 16 servo motor pin headers has been spaced out the correct distance from the others to make it easier to attach your servo motors. They are pinned out in the proper order for most hobby-type servo motor connectors. The Pi Servo Hat is the same size and form factor as a Raspberry Pi Zero and Zero W, but it can also operate with a regular Raspberry Pi.

Note: This HAT does not include headers to connect to a Raspberry Pi, those will need to be purchased separately. We recommend the 2x20 "tall" headers.

Get Started with the SparkFun Pi Servo HAT Guide

This hookup guide will show you how to connect and use the Pi Servo Hat in a project.
Favorited Favorite 3

This tutorial will show you how to assemble, program, and access the Raspberry Pi Zero as a headless wireless pan-tilt camera.
Favorited Favorite 11

Getting Started with the Autonomous Kit for the Sphero RVR

Want to get started in robotics? Look no further than the SparkFun autonomous kit for the Sphero RVR! Whether you purchased the Basic or Advanced kit, this tutorial will get you rolling...
Favorited Favorite 3

Get your Basic Autonomous Kit for Sphero RVR all hooked up with this guide!
Favorited Favorite 1

Get your Advanced Autonomous Kit for the Sphero RVR built up with this hookup guide!
Favorited Favorite 0

sort of working -- but not well Buyer Beware!

I bought this board to control an x-y servo stack to move a raspberry pi camera around (pan-tilt) by remote control. So far what I have seen is a mixed bag. I have been able to control individual servos from the PI (these are small 9 gm servos) but not with the precision or finesse I was expecting. When two servos are connected I get quite a bit of random movement that seems to be related to electrical noise on the power bus. I have powered the unit both from the sparkfun board's micro USB connector as well as the one on the Raspberry Pi Zero W. In both cases I get lots of random movement and in the former case I also have periodic crashing of the Pi. I'm thinking that the only way to get this board working right is to separate the 5 volt power between it and the Pi and probably greatly increase the amount of filtering on the supply to prevent high frequency noise from influencing the servos. When the above issues are combined with the very poor build quality of the pan-tilt assembly that was sold with it, I find a lot of room for buyers remorse. The mechanical connections between the servos and the plastic housings included are so poor that I doubt the pan-tilt mount can be made to function for more than a brief "test bench" demonstration without breaking or stripping out the screws used to attach servo arms to the plastic housings. In fact, the lower (pan) element cannot be interfaced to the servo with the arms provided as they don't match either the instructions or the molding of the plastic housing. This means that in order to even test the device I had to do significant hacking of the hardware of the kit. Not classy at all. Perhaps at some point I'll be able to make use of it but the amount of work to be done just to get the kit to function has sent me down the path of multiple fixed position cameras for now.