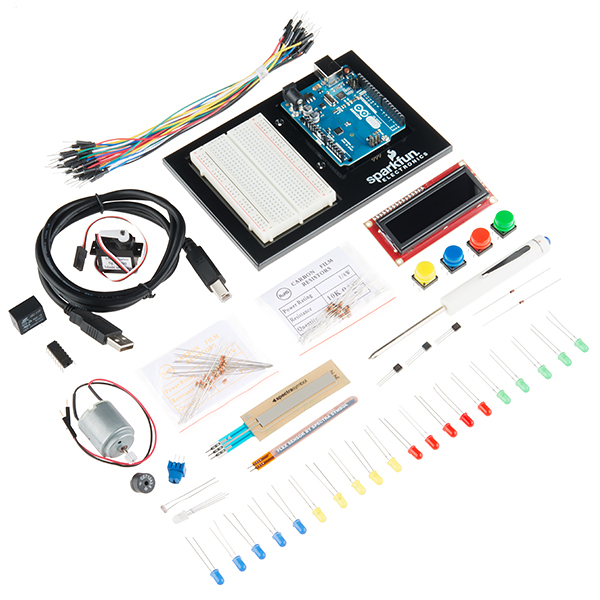 The SparkFun Inventor's Kit (SIK) is a great way to get started with programming and hardware interaction with the Arduino programming language. The SIK includes everything you need to complete 16 circuits that will teach you how to read sensors, display information on an LCD, drive motors, and more. You don’t need any previous programming or electronics experience to use this kit.

The on-line SIK Digital Guide (in the Documents section below) contains step by step instructions of how to connect each circuit with the included parts. Full example code is provided and explained and even includes troubleshooting tips if something goes wrong.

The kit does not require any soldering and is recommended for beginners ages 10 and up. This International version includes the new Simon Says circuit experiment found in the V3.2 SIK with all the LEDs and tactile buttons you will need to complete it, the kit also replaces the SparkFun RedBoard for the tried and true Arduino Uno and removes the SIK Guidebook and carrying case. With these parts being swapped and removed we were able to reduce the overall size and weight of the kit making shipping cheaper and easier for anyone ordering it internationally.

Note: As stated above, this SIK does NOT include a carrying case. If you would like to purchase one separately they can be found in the Recommended Products below.

We can use the parts and concepts in the SparkFun Invetor's Kit to make a primitive keyboard instrument.
Favorited Favorite 5

about 7 years ago by Member #632833 verified purchaser

There are scores of sites online where one can purchase Arduino boards and especially electronic components. What sets SparkFun apart is the professionalism of the pre- and post-sales technical support staff. I feel very good about giving my money to a company that fosters such a great culture for their people.

about 7 years ago by Member #407112 verified purchaser

This kit is really going to jump start my long delayed electronics and micro-controller explorations. Thanks for putting this all together.

about 7 years ago by Member #645627 verified purchaser

Definitely a great pack for someone looking to get started w/ Arduino.

about 7 years ago by Member #675498 verified purchaser

Very good starter kit. The instructions were easy to follow (even though I had to download them), and the projects are interesting. Unfortunately, the screws that came with it don't fit in the arduino's mounting brackets. Other than that, no issues what so ever.

about 7 years ago by Member #695469 verified purchaser

Components are all working and working great

Great kit for starting out!

about 7 years ago by Member #704098 verified purchaser

I never was really far into Ardunio, because i never knew what to buy and at what price but, this is the best electronics kit iv'e ever owned. and yes, they do have a carrying case, which I also bought.

about 6 years ago by Member #697534 verified purchaser

Great kit, I found a ton of uses for it all ready.

about 6 years ago by Member #704717 verified purchaser

Everything worked right out of the box. The SIK Digital Guide is a great step-by-step introduction to all the various hardware components in the kit.

I'd like to see more breadboard wires and buttons in the kit. It's very easy to use them all up as soon as you move onto more complicated projects than are in the SIK Digital Guide.

Learning along with the students

about 6 years ago by Member #719840 verified purchaser

I am enjoying learning about the Arduino Uno with the Sparkfun Inventor's kit. I wish there was a student guide that was specific to the Uno included and that was in color. I realize, however, that cost may be a factor there. Box is a little small when we try to put stuff back. Other than that, we are having a great time. Thanks!

Excellent kit to start with Arduino

about 6 years ago by Member #734541 verified purchaser

The kit comes with everything you need to understand the basics of interfacing with Arduino and its functionalities. What I liked much about the kit were the little projects that can be done using the kit with its components which in fact give you a comprehensive introductory background of how to play around with Arduino ports to control external connected devices. I do recommend the kit for beginners or professionals who want to refresh their memories of dealing with microcontrollers

Great kit to get started

about 6 years ago by Member #736467 verified purchaser

The kit comes with lots of sensors and the starter guide on the webite is awesome. I have been learning together with my 3yr old ànd my 7yr old. The 7yr old can even read the wiring diagrams by herself.

about 6 years ago by formerlyStars verified purchaser

I'm working through the "tutorial" activities in the guide available online through SparkFun. Only on the 4th activity (still working with LEDs) but I'm learning a lot. Neat little starter kit.

about 6 years ago by Member #753253 verified purchaser

Lots of bang for the buck. Excellent choice of lessons to help enter the Arduino world.

about 6 years ago by Member #577672 verified purchaser

Documentation is is excellent

about 6 years ago by Member #717255 verified purchaser

I was looking to source a kit to use in my intro to engineering class, this one will be outstanding - mostly because of the well written and illustrated manual. A novice should be able to get these projects working.

Recommend that you purchase a poly parts box. Including one would be a nice touch.

This kit needs a manual that is more invovled

about 6 years ago by Member #758632 verified purchaser

I've noticed in the class I'm taking other kits come with a very detailed information book that would helpful. Otherwise seems to be a good kit. I did download the SparkFun pdf but it needs more detail.

about 6 years ago by Member #763837 verified purchaser

I've really enjoyed learning the Arduino with this kit and everything has worked great. The mount is handy and the SIK projects have been very helpful in learning how to use each component. There are also some tutorial series on YouTube which utilize this kit making learning really easy.

Why SparkFun? If you search the web, you will find cheaper kits direct mailed from China. From a friends experience, the parts arrived in a bag and that's it. No support documentation, no libraries, no sample projects, and realistically no returns. That doesn't provide a very good learning experience in my opinion.

about 6 years ago by Member #125555 verified purchaser

It almost got 5 stars! First, everything you need is in there, it's a wonderful pile of parts! The only disappointment I had was with the tutorials, every single picture, the orientation of the UNO to the breadboard is reversed, leading to a lot of checking and double-checking on what pin is going where.

about 6 years ago by Member #789872 verified purchaser

I received the SparkFun Inventor's Kit and held it for a couple days. I was very interested in opening the box, but it was for my son's birthday. Wow! Upon watching my son open it, he had a glow about him. He opened the box and started sorting through the included items. No other gifts mattered at that point. :-)

As he was creating his second project we noticed we did not have enough LED's. The picture of the SIK V3.2 shows 5 of each color. we received three of each color. :-(

Other than that we are so pleased with SparkFun company.

Thank you so much for providing this technology. It has been a joy to learn and create!!!

about 6 years ago by Member #806947 verified purchaser

Projects are fun and you learn alot. Can't wait to make my own projects.