A glimpse into the world of eTextile fashion by Lynne Bruning!

This post is brought to you by Lynne Bruning - eTextile guru and host of electronics fashion shows around the globe:

Organizing a fashion show at Maker Faire is like herding cats hyped up on a new strain of geek-nip. The wearable computing fashion designers *want* to share their innovations on the runway. Really, they do. However at the drop of a Lilypad they skitter away to stalk the latest developments in hardware and meet their colleagues in RT.

Fortunately there is always a blinky-bling designer in the audience who is willing to jump on stage to strut their 1,536 LED T-shirt  - thanks Erik! There are also designers that overcome their stage-fright and throw up a hand for geek righteousness!

As much as I might try to corral this insanity of impromptu details, lighting malfunctions, dead batteries and my own stage-ffffffright, I have to take a deep breath and remember - this is Maker Faire! We have come together to share the latest innovations, laugh at our mistakes (especially mine) and support the eTextile and wearable computer community. And without further ado, here are the highlights from the eTextile world at Maker Faire in NYC!

First check out the above video by Angela Sheehan for an overview of the event! There is some pretty amazing stuff in this electronic fashion show. For a full list of participants, check out this website. 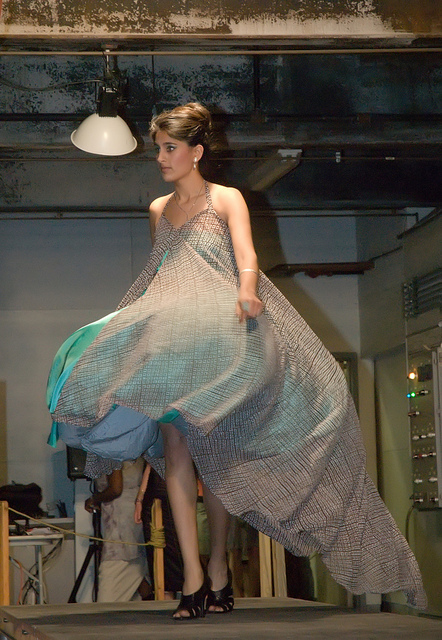 Here is a cool project from Amisha Gadani - the Blowfish Dress. Using muffin fans, batteries and an evening gown, Amisha's project activates a boundary when the wearer becomes afraid and clenches her fist. 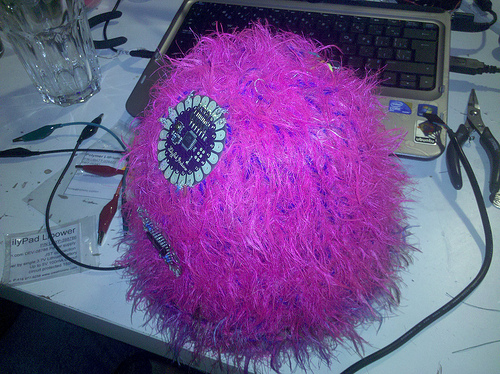 This Compass Hat by Leigh Honeywell uses a Lilypad, shift registers and LEDs built into a hand-knit hat to allow the wearer to find their way home.

And here is the Thinking Hat by Sean Montgomery! Sean's project uses EEG sensors, amplifiers, microcontrollers, and RGB LEDs encased in a translucent plastic brain cap that visualizes the wearer’s gray matter activity. Honestly - I thought it simply *looked* groovalicious and then I read Sean’s explanation and how-to tutorial and was humbled by his genius. Apparently, I was not the only one taken with this project because The New York Observer produced a video interview with Sean. 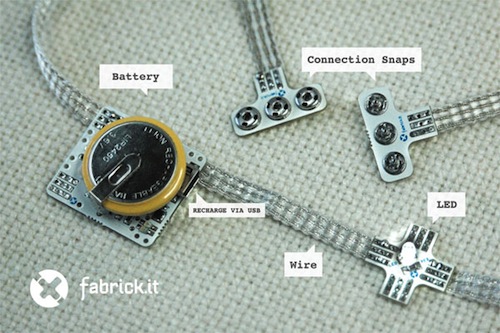 Despina Papadopoulos of Studio 5050 was busy talking about Fabrickit, their new hardware of wearable electronic modules. These pre-assembled ‘bricks’ make it easy to construct any project you can envision! 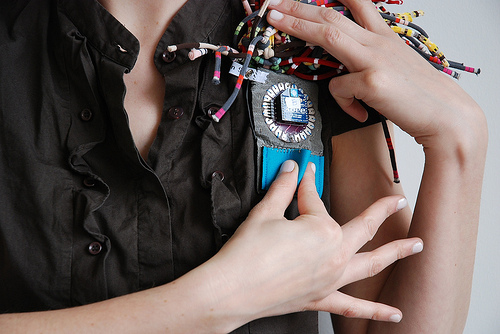 Kate Hartman, creator of the Muttering Hat, wanted to share her latest interactive project but was busy interacting elsewhere. Nudgeables is a set of accessories that enable the wearer to ‘nudge’ a companion from a short distance away. I was seriously disappointed that this project was not on stage as I wanted to use it!

By now your own grey matter should be in rapid fire mode as you collectively think to yourselves “I would do it this way...”   and   “Imagine if...."  Well it's your lucky day!  If you make it, I’ll put it on the runway. That’s right - you have six magical months of creative craftsmanship and experimentation before the next eTextile and wearable computer fashion show! Hesitation kills, so get to it!