My Love/Hate Relationship with Conductive Paint

It has, in the ensuing months, become a magnificent educational experience, a hazerless hazing, and an objective lesson in hubris. Lesson learned - there are no easy projects! I'd like to take the opportunity to share some of the lessons I've learned about conductive paint - maybe other people out there have lessons to share as well!

The original plan was this: I have a roommate studying graphic design. He was excited to create a two-color design that could be painted on my office walls. He took my garbled suggestions in stride, and presented me with a lovely design. We planned to paint it in four layers:

At first, the painting went according to plan. We tried to use a projector, but nothing would really give us the whole wall without distortion, so my roommate and I considered it a small setback, and just traced the design by hand on the wall with pencil. We painted the background and magnetic paint first. Be warned, if you're using magnetic paint under a layer of latex paint, make sure you use several thin layers, and be aware that you're still not going to be holding up a substantial amount of weight. We used about 4 layers of paint and exclusively rare earth magnets. 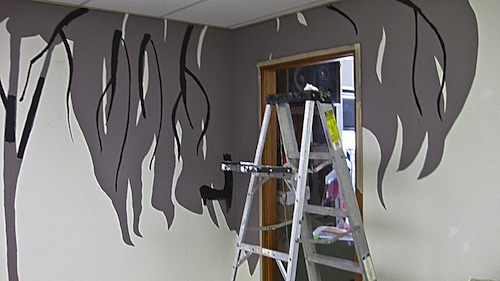 Next, we painted the second layer of latex paint and the conductive paint traces. Since I was feeling cocky and preemptively victorious, I went ahead and threw in paper leaves to add more dimension. 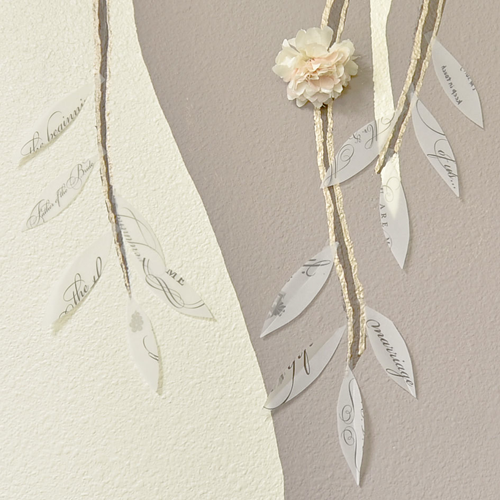 I'm including a detail of the conductive paint to emphasize something you may or may not know - in addition to being functional, it's really beautiful. I had to use several coats of CuPro-Cote conductive paint to get a reasonable resistance, but it is very reasonable - if you check your resistance carefully and apply more paint than needed, it's pretty easy to get down to around 5 ohms per foot. Furthermore, it goes a long way. I purchased a 4 ounce can, and after doing the traces for my entire tree, still had about half left. A quick test with the bench power supply demonstrated that the traces were definitely sufficient to power the LED flowers I made to test it. 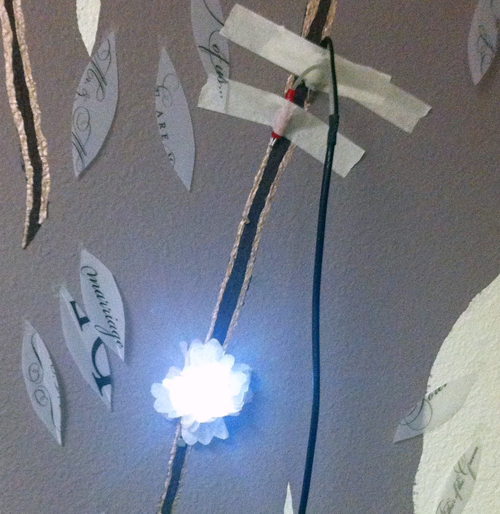 The bad news? Conductive paint dries REALLY quickly. If you're painting from the can (I was), it will dry so quickly that you'll be constantly pushing a skin of dried paint off of the top of your paint with the brush. Use it quickly, and store it carefully! And my greatest problem? Latex paint is not a sufficient insulator between two coats of conductive paint. I painted all of my negative traces, painted over anywhere that the positive trace would have to cross with latex paint, then painted the positive traces. When it came time to finally hook up power and see it work? Nothing. The entire thing was shorted out, everywhere that the traces crossed. I tried a patch test to see if the latex paint would insulate if I used multiple coats and gave it 24 hours to cure, but that was no good either. I have to conclude for now that latex paint and conductive paint interact in a way that I hadn't anticipated. I used a Dremel tool to sand the paint off of those intersections (a difficult moment for Pete to walk in on), and am currently in the process of recreating those connections with copper tape (since it can't seep) and several layers of electrical tape to insulate.

This is where I would like to invite the community to leave their feedback if you are so inclined. Has anyone else had a similar experience with conductive paint? Does anyone know why this happens, and what other substances we can expect conductive paint to interact with this way? Is it all paints, or only latex? Feel free to share your own tales of hubris in the comments, and I'd love it if anyone can shed light on what's happening here, chemically. In the meantime, I hope that other people's experiments with conductive paint can benefit from my mistakes, and that everyone can appreciate my most important lesson: Calling it an 'easy' project is asking for trouble!