Check out this recap of our trip to a local elementary school!

On Tuesdays at Centennial Elementary School in Firestone, Colorado a MESA (which means she has to figure out how to teach Math, Engineering and Science all at once) educator named Sarah Bloms teaches fourth and fifth graders various basic aspects of physical computing, which is not your standard elementary school material. Previously, physical computing (or embedded systems) was taught in college and high school courses, not at the elementary school level. 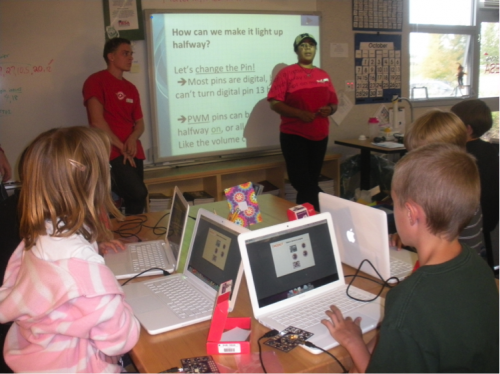 That’s right, those are fourth and fifth graders programming microcontrollers.

That all changed when Sarah wrote grants to CenturyLink and DonorsChoose as well as raising additional funds in a holiday concert. Sarah then came to SparkFun and took our first Microcontrollers for Educators class. She had experienced good results teaching the kids drag and drop programming with Scratch, from MIT. So initially her plan was to teach sensors using PicoBoards and Scratch, but when she saw Modkit she decided she would also teach Inputs, Outputs and maybe even get into Serial Communication with her elementary school kids. Jeff and I told her we would make sure that she got our support when the time came to teach LilyPad microcontrollers because teaching an emerging technology requires a higher teacher to student ratio. For everyone involved it was our first time teaching microcontroller technology to elementary school children during school hours. There were a few glitches, but guess what? The kids love it. They get it and they love it. 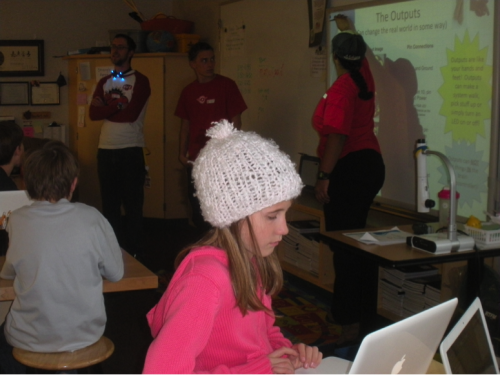 On 10/2 and 10/9 SparkFun showed up at 10 a.m. and armed only with a bin of back up PC back up laptops, microwave food, cookies and beef jerky, we taught physical computing to the groups of little dudes seated at the desk with names like Prairie Dog, Worm and Sun. Through out the day a group of around twenty eight kids would cycle into the classroom. Sarah would introduce the visiting instructors and then we’d talk about robot brains, plug in our boards(Thanks Leah Buechley and Pete Lewis!), and start flashing lights. Sometimes we’d even get as far as the difference between PWM output on a regular LED versus the common anode RGB LED before the fifty minutes were up and the students had to lineup to march to their other classes. We did this five times each day. Instructors from Production, Technical Support, and Shipping helped teach each round of classes covering either Output or Input, proving me right when I say that everyone at SparkFun is potentially an educator. 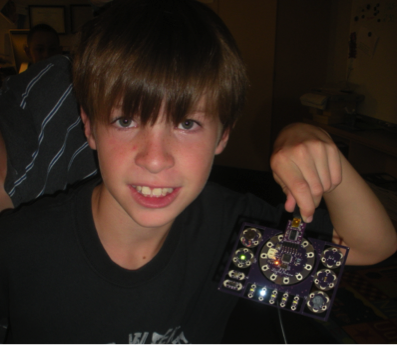 In the evening after the first day Sarah came to SparkFun and we all piled into the van again to head to an evening at RAFT in Denver. RAFT was hosting a charity event so after we toured the large warehouse of useful and random educational materials we got to wander around doing science experiments, eating cool (literally) stuff, and talking to educators at various levels in the Denver educational system. 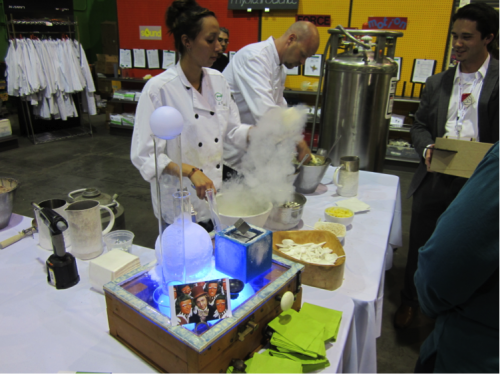 Boys and Girls Club was manning booths and I ran into their head technology educator, Seth Kento. People were exhibiting various educational activities made at RAFT so we made the rounds checking those out as well, including RAFT’s giant functional breadboard. It made me especially proud that the gentleman who exhibited their giant breadboard was Tom Graves, an incendiary device engineer who logged hours at the NASA Manned Space Craft Center from 1965 to 1985. It was fun, and always is, to wander around looking at all the stuff…we even found a llama! 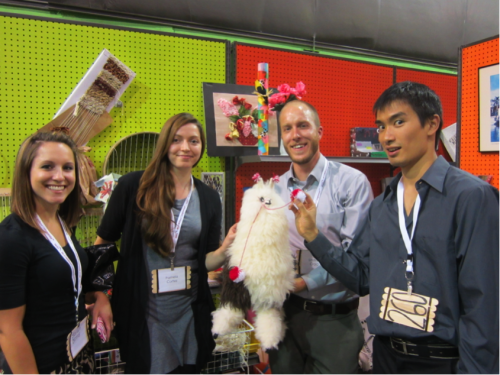 I had been there before when we helped teach a week of workshops at RAFT’s first symposium, but Bobby, Pam and Sarah had never been to RAFT before. None of us had ever met the llama before. Later in the night Colorado Senator Mike Johnston, Lt. Governor Joe Garcia and head of RAFT Stephanie Welsh presented awards to educators who have made a huge positive impact on Denver’s students, schools and communities. 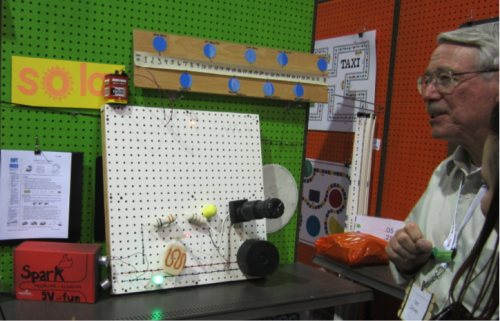 Tom Graves, who used to blow stuff up in space for NASA, exhibiting a giant functional breadboard.

Sarah Bloms also teaches concepts like Ohm’s Law, voltage dividers and more in depth programming using PicoBoards and Scratch in her class this year. She’s even made noises about teaching with Makey Makey. We at SparkFun Electronics Education are grateful to her for being brave enough to take on the task of being a trailblazer in the educational system. It is amazing seeing kids as young as her students get into physical computing. I always hear educators say, “I wish we had this when I was growing up.” I agree, but really I just wish we had more people like Sarah Bloms, the people at Modkit, RAFT and Leah Buechley who know that kids can learn how to use technology (truly use, not just buy) like this if we work hard enough and give them the chance!