Highlights from Lindsay's Trip to the Lonestar State 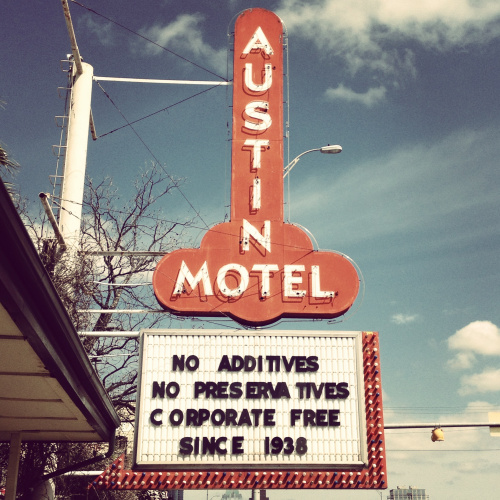 Since the formation of the Department of Education in 2011 we have been traveling throughout the country hosting workshops and events designed to inspire students of all ages. It was a nice change of pace to sit back as part of the audience and enjoy the inspiration and excitement of listening to all of the wonderful panelists and presenters at SXSWedu. There were too many notes to go through and I was chastised a bit for my last lengthy conference post, so I've added headings in this brain dump to allow for easier scanning/skipping. Let's begin with a few lessons learned that I thought I would share:

The Department of Education spends a lot of time evangelizing the merits of hands-on, kinesthetic, differentiated learning, so it is hard for me to sit back in a seat for most of a day listening. That being said, the organizers of SXSWedu should be applauded for a fantastic lineup. I've tried to recap a few choice panels below. However, in a delightful change of pace from sitting quietly in the audience, I also participated in the Squishy Circuits, Toy Engineering and More! workshop hosted by Tricia Berry and Didey Muniz. We were tasked with building the best parachute to ensure a safe landing for a toy animal. The materials included different weights of paper, aluminum foil, yarn and a few paper clips. We found partners, collaborated on design, and tested our models before a culminating group drop. It's hard to say how safe our horse was in the final drop; I probably should have paid better attention in physics. Following the first activity, Berry and Muniz presented a slideshow from the PBS series, SciGirls, which focuses on improving confidence, emphasizing a deeper understanding of inquiry, and a broadened awareness of careers for 8-13 year-old females. The discussion surrounded seven strategies for engaging girls.

We ended the workshop building Squishy Circuits. I had one of those deeply proud open source moments when an enthusiastic educator in the audience asked about gaining access to the slideshow so she could bring the materials back to her class. The women running the workshop were unable to oblige due to the copyright materials on the slides from SciGirls. These are the moments that solidify exactly why we continue to embrace the open source culture here at SparkFun. The last thing we ever want is to deny materials to an enthusiastic and inspired educator. Thankfully I was able to catch up with the educator at the end of the workshop and give her the link to our Squishy Circuits materials. If you're interested, you can find out more about Texas Girls Collaborative Project and SciGirls.

The maker panel was a nice discussion of experiences and quips about implementing "making" into the education system. Dougherty delivered a sage warning regarding filling a room with machines and expecting something to happen, emphasizing the importance of having support for a maker program. The panel also discussed the importance of creating an interdisciplinary space and how it connects people to technology. Wendt emphasized the importance of ownership and how that gives students a sense of purpose and meaning. Though it seems like a strange correlation, I thought about my high school experience and that I thoroughly enjoyed the responsibility and "ownership" of the specimen I was given to dissect in my biology and anatomy courses. The experience of deconstructing and learning through hands-on exploration is certainly what inspired my path to undergraduate and graduate studies in science. Despite being a far cry from your typical maker project, I think the overall message is the same. I really enjoyed the friendly disagreement between Wendt and Dougherty about the importance of formally integrating "making" into the curriculum. I happen to side with Wendt who was arguing in favor of ensuring integration. Overall I think the idea that the maker movement, with roots in skillsets that were traditionally tied to vocational or technical programs, is no longer an alternative path (it's for everyone), is a fantastic message.

When the department formed in 2011 the acronym STEM (Science, Technology, Engineering, Mathematics) was gaining momentum due to government attention to how these important fields affect the economy. I cannot pinpoint the first time our team was introduced to STEAM - adding art(s) to the popular acronym - but there wasn't a moment of hesitation before we all quickly adopted this preferred acronym. It could be argued that there are many other important letters missing from this concept, but we firmly believe in the importance of that A. The discussion of this shift from STEM to STEAM was definitely a recurring theme at this year's conference, culminating in this discussion with a rockstar panel. Each panelist provided a brief discussion about why the arts are a vital part of a comprehensive curriculum. They encouraged us to go "off road" and step outside our disciplines, to think about the idea that we design to differentiate, and that innovation is the product of art and design. I had a particular affinity for Ainissa Ramirez's discussion about the importance of curiosity, creativity, problem-solving, and making friends with failure. She recently launched Save Our Science. If I left SXSWedu adding a new mantra to my life it would be Ramirez's "discoveries are made one failure at a time."

DRONES.edu: Hands on the Future in the Classroom

Despite a smaller audience than I would have imagined given the societal weight of the topic, the Drones.edu panel was one of my favorites. The panelists discussed the roles for drones in capturing data after natural disasters, how to approach and set some level of regulations on drones, drone hijacking, and accessibility to this technology with companies like our friends, DIY Drones. The hour flew by with really poignant dialogue about the future of this technology. I was particularly impressed by Matt Waite, a professor of practice in journalism at the University of Nebraska-Lincoln College of Journalism and Mass Communications, who runs the Drone Journalism Lab. I had the opportunity to briefly chat with Matt following the panel and was really excited to hear about his journalism students learning to solder and hack hardware. If you're intrigued by drones you might want to check out DroneCon this summer at our headquarters!

Don't Make Me Go Back to Traditional Education

If you're questioning various characteristics of Generation Millennial, perhaps it is time to reserve total judgment. Have you seen the recent news highlighting some pretty amazing scientific work of young men and women that are too young to vote? We are withholding judgment about this generation because we have had the amazing opportunity to interact with folks like Joey Hudy, Quin, and Super Awesome Sylvia. At SXSWedu I had the opportunity to chat with Isabetta Bleu and her father, Ludvik Herrera. Isabetta is an eighth grade student at West Fargo STEM middle school in North Dakota. Her experiences in the STEM school have been exceptional and allow her to get the most out of her education. The panel discussion between Isabetta, her father, and a former teacher, who now serves as the Assistant Principle at West Fargo High School, covered how things would change when Isabetta moved from a STEM-oriented middle school to a "traditional" high school. I thought I was a passionate student at that age but was definitely more concerned about acquiring thrift clothing to match the Beastie Boys' style than whether or not my preferred learning style would be addressed in the coming academic years. I applaud Isabetta for taking charge of her own education at a young age and demanding more from our education system. 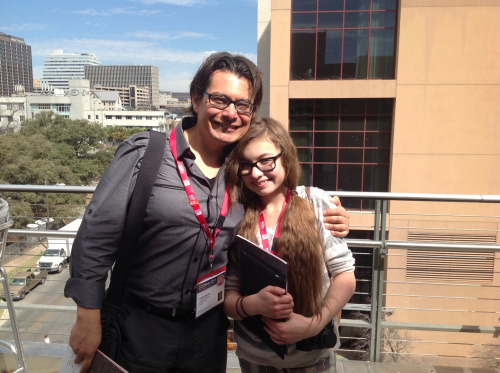 Despite finding myself in close proximity to Mr. William Gates on the final day of the conference, I was unable to attend his final keynote due to that aforementioned pesky badge bureaucracy. I decided to wash away my sorrows with a little vintage retail therapy and local cuisine on Congress Avenue. Our friendly server at the Snack Bar was quite enthused by the oversized Big Time watch adorning my wrist, so I followed unofficial SparkFun protocol and passed it along to its new owner. Another happy customer and a great excuse to build up another sweet watch! If you're strolling along Congress, I highly recommend Uncommon Objects - it's a tour de force of vintage awesomeness. It would have been easy to spend a small fortune, but I was a responsible adult and only left with a cool old photograph of scientists pipetting and logging data in a lab. 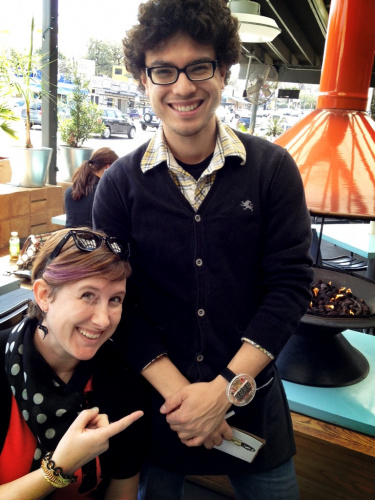