We talked with inventor Eric Gradman about his awesome new endeavor!

Recently, Eric Gradman, a prototyper, lifelong inventor, and friend of SparkFun, sent us an awesome new project. His company, Two Bit Circus, is running a Kickstarter to fund the creation of the STEAM Carnival, a modern traveling carnival with high tech games, robots, fire, and lasers to inspire young inventors in science, technology, engineering, art, and math.

Once we all calmed down, we asked Eric a few questions about the project and how it came about.

Can you tell us a little bit about yourself and your background in electronics and STEAM?

I'm the CTO and co-founder of Two Bit Circus. My background is in robotics and rapid prototyping; that makes me something of a jack-of-all-trades around here. Nowadays I call myself a professional inventor (well, and ringmaster). If that isn't the best job title ever, I don't know what is.

I've always had a strong passion for electronics. I write software and I do mechanical engineering, but I think electronics is what really brings a project alive.

I've been creating interactive art, crazy prototypes, and "stunts" for years. I came to discover that creations with strong element of fun excite people the most. They also excite me more to design! 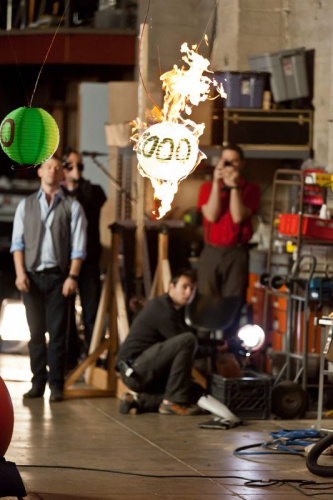 What is Two Bit Circus all about? What are some other projects you guy have done besides the STEAM Carnival?

Video games are growing exponentially more elaborate and engaging, but out-of-home activities with friends haven't changed in nearly a generation. Would you rather go bowling, or experience an immersive live-action story, complete with projected effects, lasers and mechatronics?

At Two Bit Circus we build unconventional out-of-home amusement and entertainment products. A recent project (called Virsix) is a permanent installation at an enormous, family-friendly hotel. A team travels together through a series of four rooms, engaging with virtual characters and solving challenges together. We're showing people a fun time they can't get anywhere else.

Both Virsix and the STEAM Carnival depend heavily on the fun games and inventions we build every day; things like the Gantry Crane Redemption robot - a gesture-controlled, six-foot-by-three-foot, two-and-a-half axis robot for grabbing toys. Or the party-table, a custom video game system played in the round by up to six people. 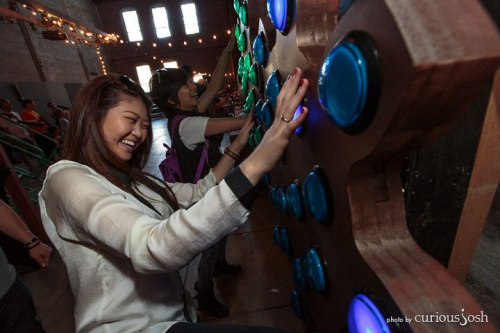 How did the idea for the STEAM Carnival get started?

We've spent years making making crazy, high-tech inventions and stunts. Some of them - like OK GO's Rube Goldberg music video for "This Too Shall Pass" - really blew up online. It's been viewed almost 40 million times. We got constant feedback from teachers and parents thanking us for having inspired their kids about STEAM in a way their schools had failed to do. It got us thinking - can we produce an event that generates that same excitement? Well, everyone loves a carnival, so it seemed like a natural way to tie together the many fun projects we were building, and inspire kids to pursue careers in science, technology, engineering, art, and math.

How will the carnival work?

The carnival is likely to take place in a fairground, with a big-top tent at its center. Like any event at a fairground, you'll find some familiar things: contests, prizes, tasty food, and live entertainment. But there will also be robots, lasers, and high-tech games like nothing you've ever seen. We spend all day every day dreaming up crazy games and other ways to show you a good time. For the first time, we'll have it all in one place.

The carnival is going to start in Los Angeles and San Francisco next spring, but we really want this event to reach as many people as possible. I love Boulder, and I would love to take the Carnival there soon! 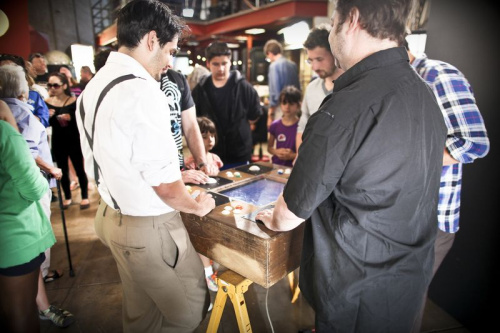 What materials were used when building the various parts? Any SparkFun parts in there?

I've been a SparkFun customer since Nathan was shipping out of his apartment, and SparkFun parts play a huge role in what we do. You need look no further than our signature game: the rotating Buttonwall Twister. Each gear panel features 21 giant arcade buttons, a SX1509 breakout board, some Darlington transistors, and a Raspberry Pi, all wired together on boards we manufacture in-house in small quantities.

Our games generally incorporate some novel sensor or actuator, used in an unusual way. Often, those elements are integrated into an Arduino, Raspberry Pi, or Beaglebone. We also repurpose consumer electronics in unexpeced ways. I seem to find a way to stuff a Kinect camera or a Nintendo Wiimote into just about everything. 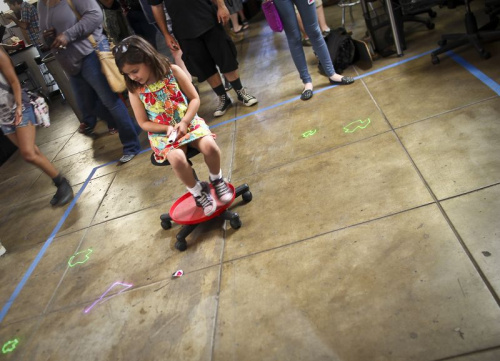 Tell us about the initiatives and reasons to include at-risk youth in particular, as well as the plans to showcase kids' projects in the carnival.

We really want to showcase kids' own work at the Carnival. We're going to have creative competitions, a digital art gallery, a concert featuring musical robots, and a fashion show of wearable electronics. We're designing kits for kids to use to to help them participate. We actually hope to get SparkFun involved in the kit-making process; SparkFun parts are a pretty important part of our toolbox.

We recognize that not every child who will want to participate will have access to funds to purchase a kit so we've built a few solutions into the process. It's crucial we're able to level the playing field for kids, and give lower-income or at-risk youth equal opportunity to participate. Who knows, one day a Nobel prize winner could say: "It all started with building this musical robot for the STEAM Carnival, which led to a curiousity about science and engineering..."

To help this we've done a couple things. First, you'll notice a few Kickstarter rewards allow donators to sponsor a kit to be supplied to an at-risk youth. We'll be allocating those to local schools in at-risk areas. Second, we plan on enabling kids to have their own crowdfunding page to raise money to purchase a kit. We think that fundraising when you're a child teaches a lot of important lessons that create a strong foundation for being an entrepreneur and innovator - going door-to-door, telling your story with passion, rallying a community, etc. 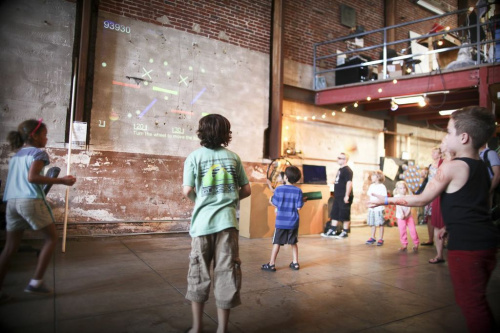 Overall, how will the carnival inspire a new generation to experiment and get involved in the STEAM fields?

We really see two core elements at work here. First, it's not enough to have kids engage with the games, we need to help them make the jump from saying, "This is cool," to "I wonder how this works," and create the avenue for them to find out. This is one reason we plan on explaining how various STEAM elements were used to create each game. We want them to have an inside look and "spark" their curiosity.

Second, and this is an equally crucial element, we need the adults in these kids' lives to be inspired as well. We need them to be excited and curious and to want to learn and play alongside the kids. Growing up, we had supportive parents who encouraged our passion to build games, and tinker with things, and experiment - all of which was instrumental to us pursuing the careers we have.

Awesome job Eric & Two Bit Circus! In fact, we loved the project so much that SparkFun has sponsored a visit from the STEAM Carnival at our headquarters! If you're as into games and fire (and education too, yes) as we are, check out their Kickstarter campaign. Good luck guys!