Recapping the First Leg of the National Tour

The first leg of the tour has ended - check out the details!

Over the last month or so, the SparkFun Education Team has been out on the first leg of the National Tour. We’ve now completed our visit to the western states! Here's a quick rundown of our trip, starting with a video of our visit to San Jose and the Bay Area.

On June 7th, Matt Johnson from Production, Dave Nowinski from Kitting and I left Colorado in our newly minted RV. 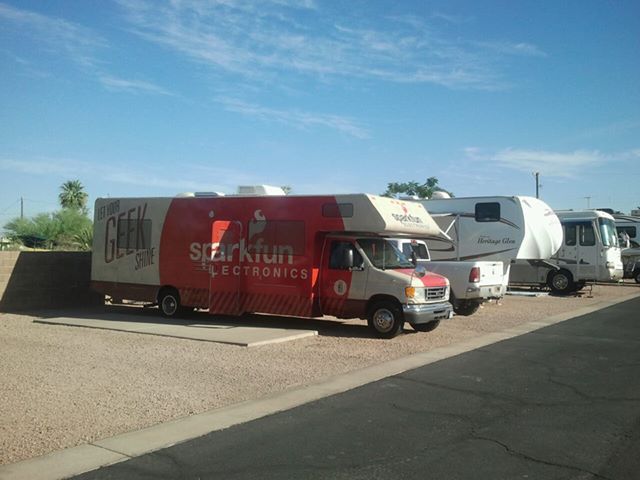 We headed due south through New Mexico and then into Arizona. Our first stop was a group of educators at Pima Community College in Tucson. We all dug in to the SparkFun Inventor's Kit for an introduction to Arduino; the class went great and this was our first trip through Tucson, so we got to see a new community. After the class we all went over to Xerocraft - the Tucson Hackerspace - and met the good people there. The space is really fun and we wished we had more time to hang out and see what the area has to offer. 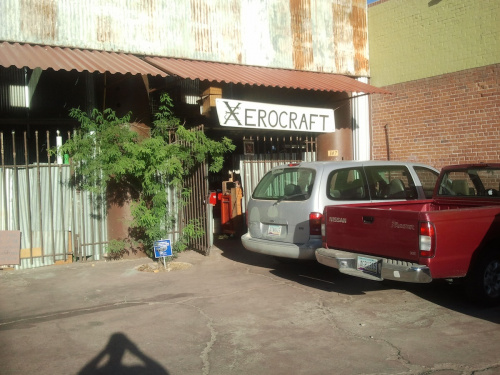 Our next two days were sponsored by Gangplank, the Phoenix area shared Hacker/workspaces. We were totally excited to get to work with a lot of families the first day in Chandler; the second day found us at the Gangplank space in Avondale and we had small groups of community educators and city development people. The workshops were sponsored by the City Council, and our hats are off to Charlie and his staff for having such a progressive stance on technology in the community. 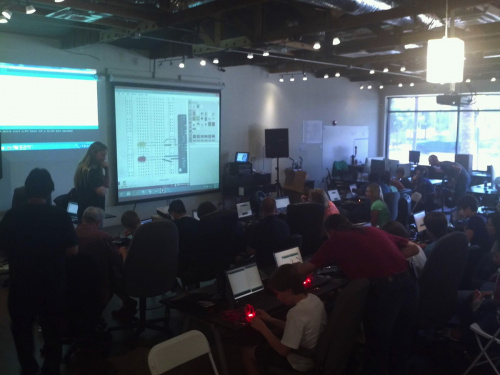 We rolled west that night and spent the night at Cabazon, made famous in “Pee Wee’s Big Adventure." Wildfires were burning in the mountains above us and the scene was pretty surreal. 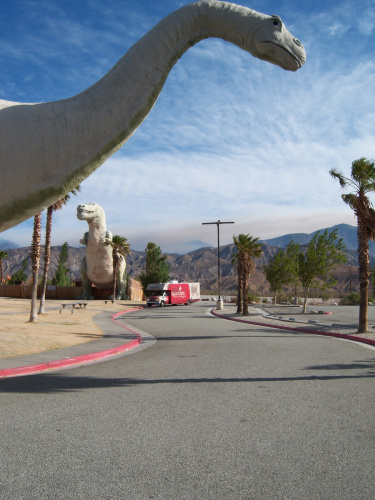 The next day was a day off and we spent some time with Jean from The Exploratory in Los Angeles. Jean runs a lot of classes and we always love working with her. If you’re in LA look her up and bring your kids along.

We headed to Palmdale, CA, the next day for a class with Gregg Anderson Academy. We spent the day with K-6 kids working on Scratch and the Picoboard - a grand time was had and we would love to see these kids again. 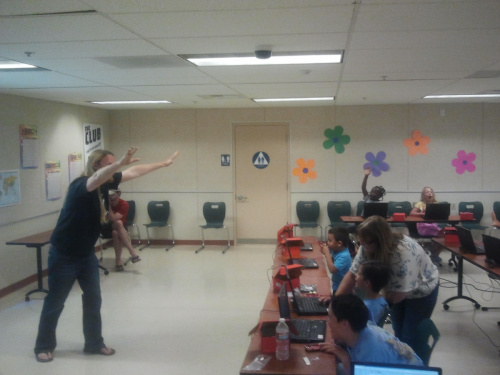 The next day was a breather in central CA and then we rolled into San Jose for a workshop with The Tech Museum of Innovation. We tailored a day of activity and interactivity with educators and people working in the Maker movement with The Tech. It was a real pleasure to be in Silicon Valley and get to work with the broad range of people we had in attendance. 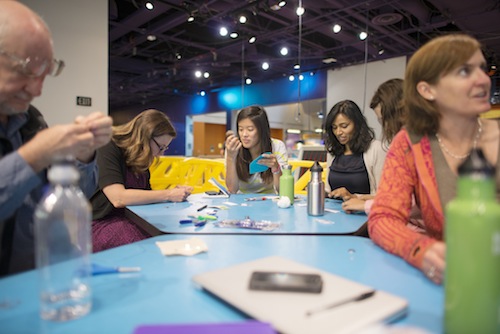 The following day found us in San Francisco at the main library. SFPL had contacted us about our work with libraries and we set up some training looking at how to help librarians encourage their communities to get a start with emerging technology. We spent the day going through Squishy Circuits, E-origami, Scratch/PicoBoard and Arduino. We’re pretty excited with the new things libraries across the country are doing and today was no different; as we left we were plotting our return to the Bay Area for more work with the library. 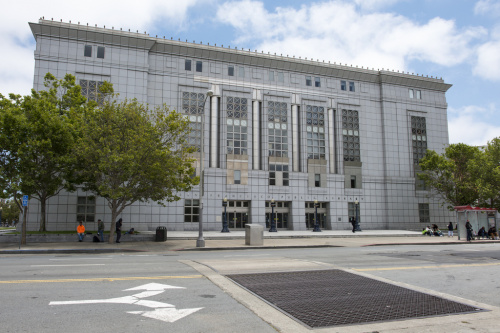 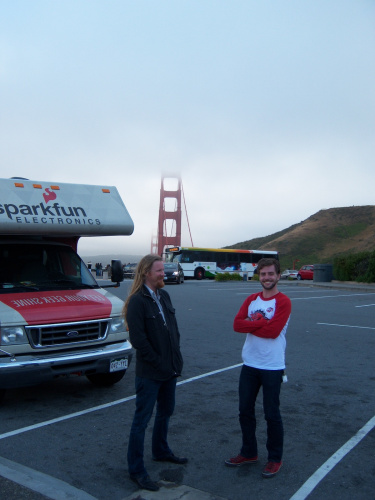 From San Francisco we drove north and settled in for the 12-hour trek to Portland. We love the Portland scen - OMSI is fun and ADX is a fantastic addition to an already bustling community. We taught at two schools in town, The Cathedral School and Forest Park Elementary. We were really impressed by the kids in both schools and we wish every school had more committed educators like Liane and Grant. They worked hard on their own time to get us in, and they’re pushing the level of tech in their classrooms. 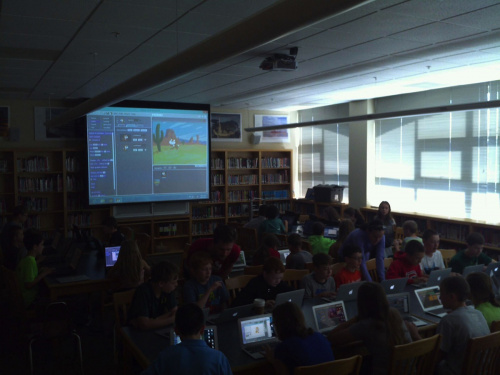 We also had a crew change in Portland, Dave flew home and Toni joined us. 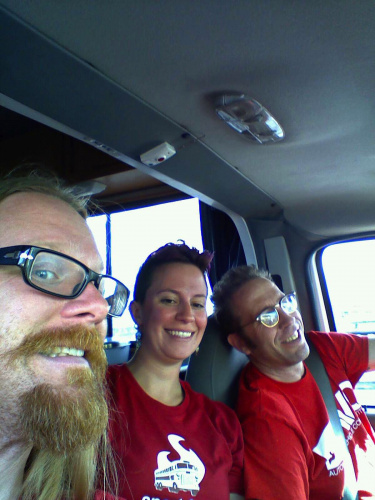 As our Journey continued we headed to the Seattle area, our next stop was Redmond, WA. We pulled the RV into the old Redmond Schoolhouse Community Center. We spent the day running two sessions, one of Scratch and PicoBoard, and one Arduino with the Inventor's Kits. We loved working with the broad range of students and parents in these sessions and we hope if you’re in the Area you’ll look up Annuska at GoodLabs; she’s doing a great job in the area and we hope to see her again. 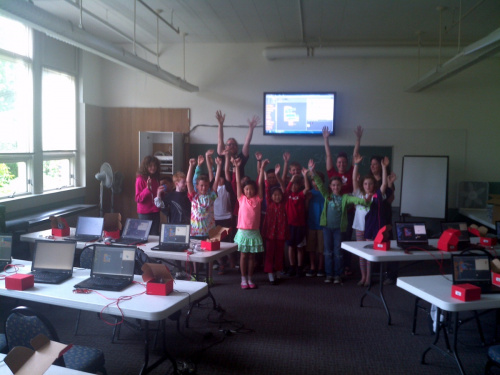 That night started our 24-hour drive to North Dakota. In February we had attended a science teacher’s event in Bismarck, while at The Career Academy in Bismarck we hit on coming back for a workshop in the summer and now we were returning. We spent two days with educators working every aspect of technology for the classroom. We covered Processing and Arduino, as well as Squishy Circuits, E-textiles, E-origami and Scratch. It was a long weekend, but we really are impressed by the rate of adoption of things like Arduino in North Dakota, which had the most tour stops of any state so far.

From Bismarck we headed east to Fargo, Matt’s hometown. Our two days in Fargo were at North Dakota State University with the folks piloting the Idealab and New Media under distance and continuing learning. Ludvik was a fantastic host and we spent two days in Fargo running a really great set of workshops that drew people from a wide range of backgrounds. We had artists and engineers as well as elementary and middle schools students. Everyone worked side by side as we covered ModKit and Arduino as well as Processing. The parting from Fargo was hard, we’d made good friends! There was a 16-hour drive ahead of us and we made a quick detour to Mount Rushmore. All in all we felt like this was a great time, and we look forward to our next leg of the tour! 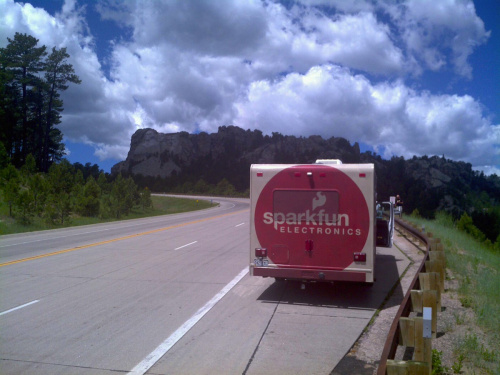