Where does the Pro Mini 5V come from?

A look at the carbon footprint of the ProMini 5V

The Pro Mini: A miniaturized and minimized version of the Arduino Pro 328, with five fewer components than its big brother.

As the sustainability coordinator and part of the green team (known as the Wildcats!) here at SparkFun, I decided to check out the carbon footprint of this tiny board.

So where do all the pieces that make up the Pro Mini come from? There are five countries they originate from, including China, Japan, Taiwan, Malaysia and the Czech Republic. But that's just the beginning! Nine out of 11 of the pieces on this board we get in bulk from Future Electronics. Future Electronics is based out of Memphis, TN, meaning that those nine pieces go through Tennessee before reaching us in Colorado. But since all of this is in bulk, it obviously isn't just nine different pieces that come in their own box with a special bow. It is hundreds of each of those pieces in their own regular boxes headed our way from Future - all for us to assemble the Pro Mini in our own building. 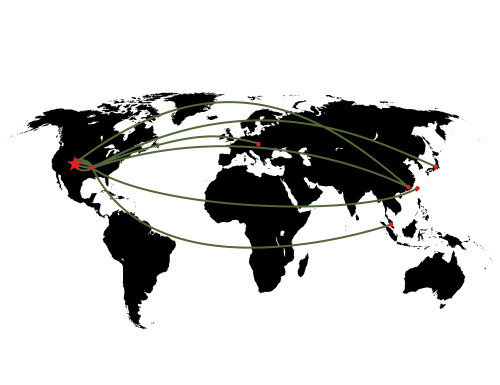 The resonator comes from Japan, and the capacitor (.1uF 25V) and resistors (both 10K ohm and 330 ohm) generally come from Taiwan.

Last but not least, the second capacitor (10uF 16V) comes from the Czech Republic and the voltage regulator comes from Malaysia.

In order to get down to the nitty gritty, we had to make some assumptions, and we couldn't get all the information about the products sent to us. For example, the parts that go to Future and come to SparkFun are flown direct to Memphis and then to Denver. Unfortunately, we cannot get all the shipping information from its original location, which is near impossible, and getting anyone to tell us that information can take forever.

So, using a carbon footprint calculator that anyone can use online, we calculated the air miles traveled. After that, the calculator comes up with a number for the metric tonnes of CO2 emitted, with the approximate cost per metric tonne.

So to follow up, I checked out the Environmental Protection Agency (EPA) to look up equivalences and what 18 metric tonnes of CO2 means in real-world terms. The EPA has their own equivalency calculator, so we can see some cool facts.

Some things I learned about 18 metric tonnes of CO2:

Since we want to do something about it, we will be offsetting the amount of CO2 emissions by doing a donation day similar to the one we did to the Electronic Frontier Foundation. It will be a contribution from SparkFun Electronics to an organization picked by SparkFun employees' vote. We will update you with who we picked, so stay tuned!

If you have any suggestions about some cool ways to calculate carbon footprints or a good organization to donate to, let us know!