Educational Outreach Coordinator Linz Craig goes to Uganda to teach robotics and eat a bunch of stuff he can't get in America.

Teaching for SparkFun I get the opportunity to travel around the U.S. teaching technology to people from all walks of life and all levels of knowledge. I’m not always sure what the abilities of the audience will be and I rarely know how much time the participants will have after my workshops to pursue physical computing. Combine these uncertainties with things like a slight language barrier, inconsistent electricity supply, a lot less digital nativity in the student population and a team I’d never worked with before and you’ll start to get an idea of what I thought I was headed into when I went to Uganda to teach physical computing this summer. The reality was that it was surprisingly similar to what I do in the U.S., but with a different set of hurdles. 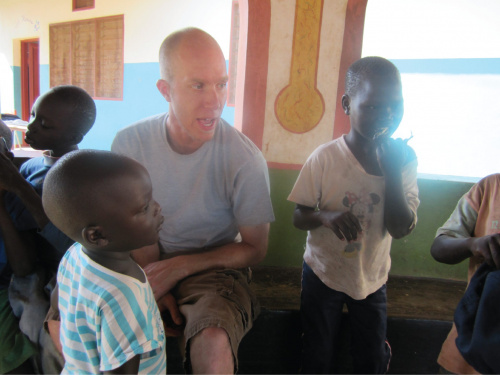 I’m getting ahead of myself. In October of 2012 I was in Boston teaching some classes at the Artisan’s Asylum, Tufts and M.I.T. with Jim “The Engineer” Lindblom. I had been talking to tech support about a woman who wanted to bring robotics to Uganda, Africa who had some questions about what she should be ordering. I wound up pacing in my hotel room on a rainy Boston afternoon talking to Sandra for about an hour. Sandra Washburn runs a Ugandan based non-profit called Oysters and Pearls. While she is a very persuasive and capable woman we both quickly realized she wouldn’t be able to lead these workshops by herself. I initially explained that SparkFun was concentrating on the U.S. and our National Tour during the next summer but that I would be happy to help her figure out what to take over to Africa as well as provide some free training. Here is the Wishlist I gave her. I also agreed to put her in contact with a man named Solomon King who was, and still is, building a team of technology educators and equipment by the name of Fundi Bots to help his country’s growth in that area. Near the end of our conversation Sandra said something to the effect of “I’m not asking SparkFun to come to Uganda, I’m asking you. You’ve got vacation time, right?” I told her I would think about it.

The next day on our way to the next workshop I asked Jim what he thought about the proposition. He looked at me immediately and said, “You’ll regret it for the rest of your life if you don’t.” Jim’s a smart guy. He knows all the words to Gangnam Style and a whole bunch about physical computing and sensors and stuff. I decided that Jim knew exactly what he was talking about.

Eight months later I’m on a plane to Africa to help a bunch of people I’ve never met in real life teach robotics on a continent I’ve never been to. Sweet.

To read what happened once Linz traveled to Uganda, check out the rest of his post at the Learn.SparkFun.com blog

According to Pete - PCB Layout Tips and Tricks