Carlos is joining us all the way from Brazil to work on a new way to make music!

A lot of unusual stuff goes on around SparkFun HQ on any given day, but in the early hours of last week, the mysterious sounds of a trombone mouthpiece could be heard briefly emanating from the Department of Education's storage room. Anyone who went to investigate would find something new for SparkFun: Carlos Mello testing the components of a brass instrument in the old laser cutter room. But who is Carlos Mello? Well, apart from being our newest Hacker-in-Residence, Carlos is a professor, musician and human flight enthusiast, among other things. Let's learn more about Carlos. 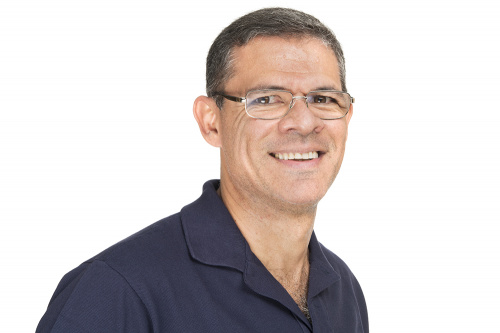 This is Carlos's face

Can you share your background, interests, and some favorite past projects? What do you do now?

I have always been interested in technology and looking for ways to incorporate it into my music-making. I started performing with computers, MIDI and synthesizers back in 1992. Then in '96, I discovered computer programming and have been coding ever since. Until a couple of years ago I knew nothing about electronics. I still don't know much, but since I was introduced to the Arduino I keep having ideas for new projects. My first hack was called "Peduino," a programmable pedal for controlling music software. I wrote a MIDI player to go with it and still use the setup to provide electronic accompaniment for my solo trombone recitals. I also used a similar device in an interactive dance project I collaborated with in 2013 (TheatreEngine). I wrote the music for the show and a PDF page-turning application for the score. The musicians (flute and bassoon) could turn the pages and control a MIDI sequencer using an Arduino pedal device.

When I started playing with the Arduino I discovered SparkFun on the web. When I came back to the US in 2012, I was able to order parts for the projects I mentioned above and was amazed by the entire service. Then I started checking your website all the time and got hooked! When I read about the Hacker-in-Residence program I started dreaming of coming here, but to be honest, I wasn't sure you guys would accept my project, especially since most other resident hackers seem to have been engineers…

I think this kind of program is an incredible opportunity for creative people to be immersed 24/7 in this culture of making things, especially with all the support from so many kind and knowledgeable people. I am definitely looking forward to getting started.

What is the project you'll be working on at SparkFun, and how long will you be here? Why did you choose this project?

I'll be here for two weeks working on an "electric trombone." The idea is to create an electronic version of an interface that I am familiar with (being a trombonist) in order to play synthetic sounds. I always thought it would be great if I could use electronic sounds in a more expressive and intuitive way, and this residency seemed like the perfect opportunity to get started in that direction. I hope to be able to put together a device I can actually use to make music.

If you could have any super power, what would it be, and what is your favorite food?

Two no-brainers. Super power? Flying, definitely flying! As for the second question you don't really have to ask a Brazilian guy: barbecue.

Cool beans, Carlos! Welcome to SparkFun and best of luck with your project!

The Boards and the Bees