In this week's Enginursday, Joel shows off his aquatic turtle habitat, complete with an above-tank basking area, automated lighting, and an aquaponic feeding system.

Continuing with the aquaponic themed Enginursday posts, this week I wanted to talk about a project I built recently that I've coined Turtleponics.

After building a few aquaponic systems for my home, I decided I would try my hand at building an entire aquatic turtle habitat that would include a miniature aquaponic system to grow food for the turtles, using their own water to provide nutrients for the plants. I also wanted to automate the tank lighting so it would fade on in the morning and fade off in the evening as well as keep track of the seasons and "rise" and "set" accordingly, similar to the lights I created for my dart frog terrariums.

For aquatic turtle habitats, it is common to build what is referred to as an above tank basking area, or ATBA. Seeing as these two turtles had been rather cramped in the tank they were in when I adopted them, I wanted to give them as much room as possible in their new home. The ABTA would also provide a perfect place to set up the miniature aquaponic system. 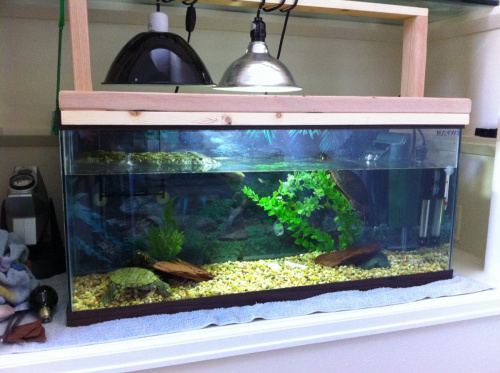 Here is the original tank, a 30-gallon breeder, much too small for these two turtles! I made the wood top to hang basking lamps more easily.

For this post, I'm going to omit the details involved in the actual stand and ATBA build. However, if you would like learn more, you can find that information over on my blog, Openponics.com.

Once the stand and ATBA were near completion, I started to think about how I wanted to light the tank. This YouTube video was a big inspiration for building the ATBA as well as providing lighting for the tank itself. The ABTA's back wall is inset a little from the back of the aquarium, which allowed for lights to be attached to the back of the ATBA. Instead of using fluorescent light though, I wanted to use 3W LEDs as I did for the terrarium lights.

Using some aluminum bar stock, I mounted two strips to the back to act as my heat sink, similar to According to Pete's under-counter lighting. I then used a Teensy 3.0 and a PicoBuck LED Driver to control nine 3W LEDs, one for each channel on the PicoBuck. The Teensy was chosen because of its ability to add an external crystal for Real Time Clock functionality. The same could have been accomplished with an Arduino Pro Mini and a Real Time Clock module. To power it all, I used one of our 12V/5V, 2A power supplies, with 12V going to the PicoBuck and LEDs and 5V to power the microcontroller. 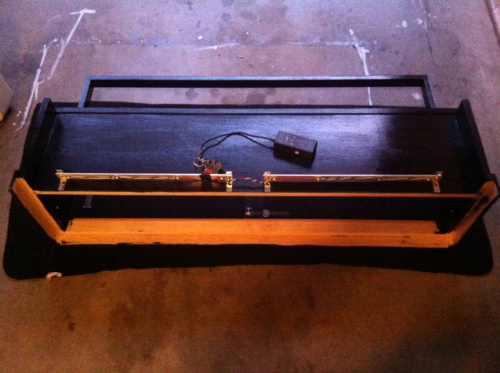 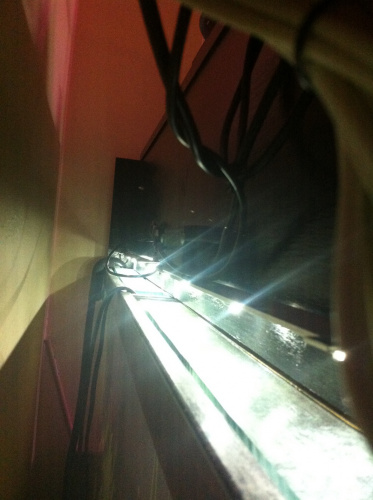 The back of the ATBA in action.

The LED lighting really made the tank pop. 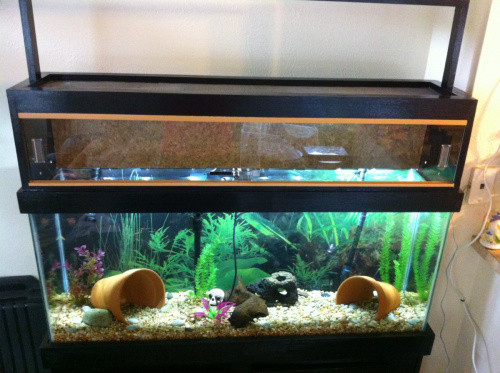 To light the basking area, I used the same hanging lamps I had used with their previous tank. A wooden support bar was built on top of the ATBA for this very reason. The middle lamp is the heat or basking lamp. The lamp to the right houses a UV bulb to help the turtles produce vitamin D and other nutrients they need from natural sunlight, and the lamp to the left is a full spectrum bulb for growing plants. This is where the turtleponics would be installed. 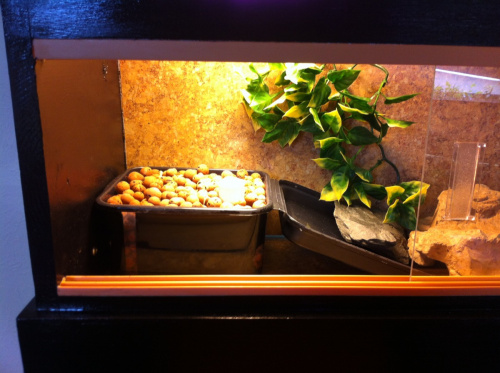 After adding a few finishing touches to the inside of the ATBA, it was finally time to introduce the turtles to their new home and begin the great turtleponic experiment. Shelly, my painted turtle , took to it like, well... like a turtle to water. Climbing up into the ABTA was no problem for her, and it was a vast improvement upon her previous situation. Aquatic turtles, despite living in water most the time, need a chance to "dry out" in order to prevent certain skin diseases. In the previous setup, the floating log was much too small for her to get out of the water completely, especially when Scooter, my Northern map turtle, wanted to do some turtle stacking. Now she can catch as many rays as she likes without me having to worry if she's getting dry enough or not, and with no time to spare as molting season had just begun. 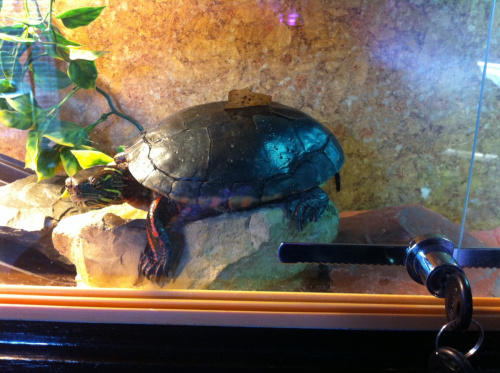 It took Scooter considerably more time to get used to the new basking area, but he now enjoys it just as much (if not more). 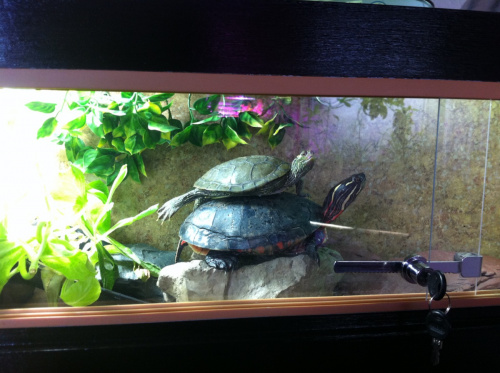 That Dr. Seuss was on to something.

As for the turtleponics, it didn't go quite as planned. The lettuce I planted grows just fine... 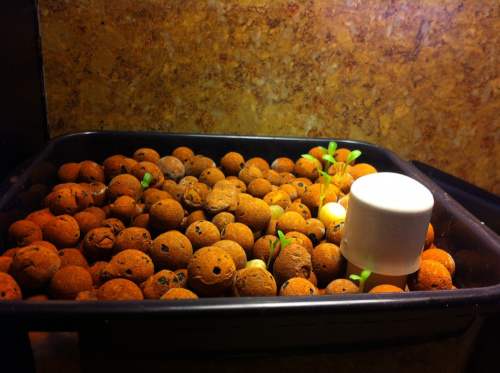 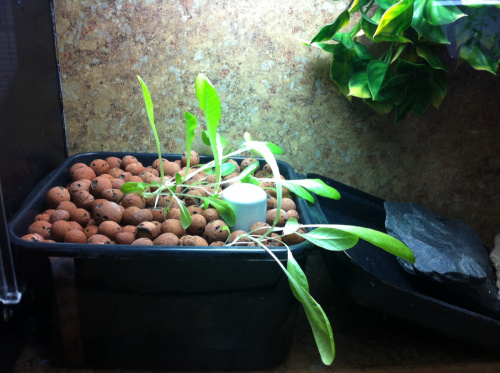 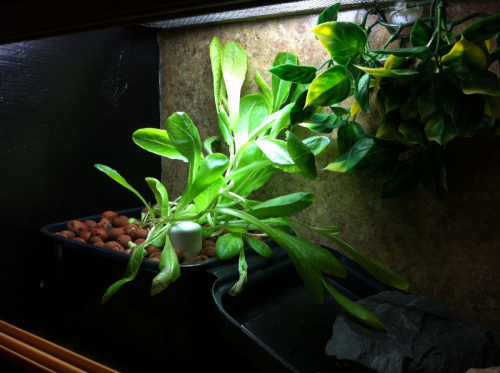 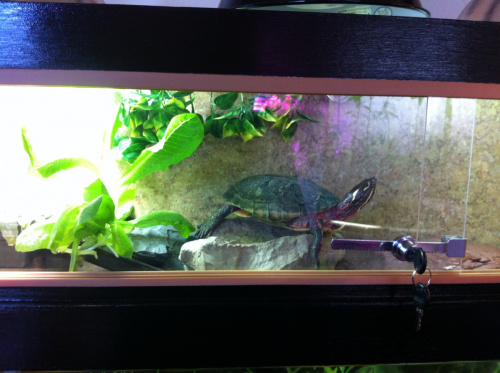 My dreams of having a self-feeding habitat were maybe too lofty. But that's not to say the project was a failure. Quite the contrary. The mini system still functions well and produces more than enough lettuce to feed to my turtles every week. I just have to be the one who puts it in the water for them. 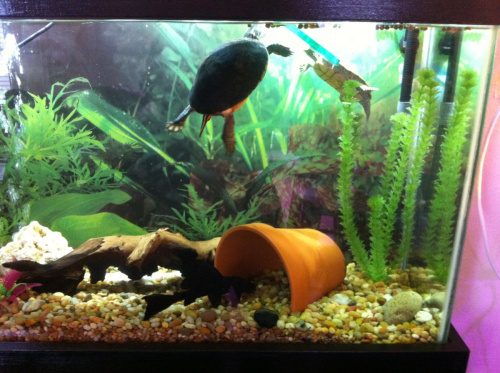 Oscar, the plecostomus, enjoys the lettuce as well.

And, should things get real rough, I could always eat the lettuce myself. Many folks would recommend against this however, as turtles have a reputation of being associated with salmonella. I've chatted with many different experts about this, curious if the salmonella could actually transfer into the plant. I've reached the conclusion that the chances of the lettuce containing salmonella are pretty slim. I've been assured that only a very small percentage of turtles actually have salmonella, and those turtles don't live very long on account of the salmonella not being good for them either. That said, I haven't eaten any of the lettuce myself, and don't intend to anytime soon. If you have a different opinion about the safety of food grow with turtle poo, I'd love to continue the conversation in the comments.

What is important is that my turtles are worlds happier than they were in their old home. And having happy turtles makes me happy. 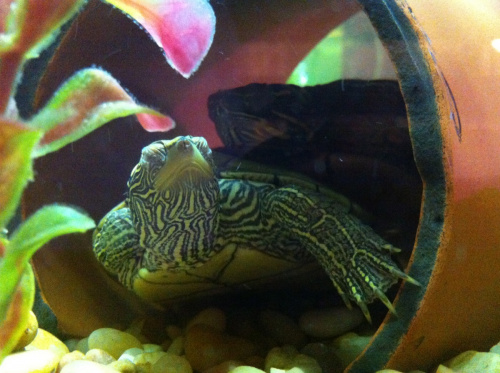 Wear Your Heart On Your Sleeve!