SparkFun Returns to the White House!

SparkFun makes its triumphant return to the White House for the 2015 Science Fair! 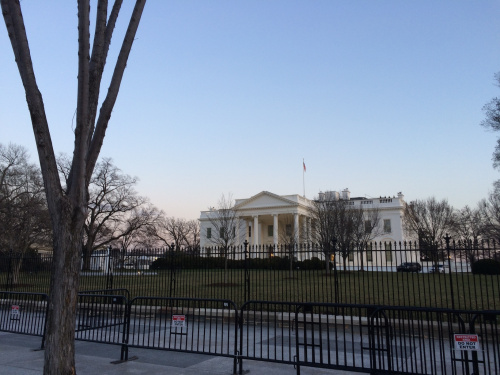 Admittedly, not the exact view we had after passing through four layers of security checkpoints to attend the Science Fair.

If you ever want to experience the feeling of being completely humbled and optimistic about the future, the White House Science Fair is the place to be. I was truly honored to have the privilege of walking around, talking to the students about their projects and breathing in all of the excitement and enthusiasm swirling around in the air. Of course, it didn't hurt having the energy of science heroes like Bill Nye and Leland Melvin in the crowd. Here is a quick highlight video of the event.

Sneaking in a few pictures with heroes.

As part of the event, the President released the statement of commitments from institutions of all kinds, including his pledge of $240M for STEM education. Our invitation to the event was tied to our sponsorship of a program with the United Negro College Fund, the Association of Public and Land-grant Universities, and the White House Initiative on Historically Black Colleges and Universities to engage students in maker activities. The program will include the first-ever Making for Change Showcase, which will highlight innovative solutions to community-based challenges.

At the heart of every project is the desire to solve a problem or improve upon a current solution. For students like Kenneth Shinozuka and Harry Paul, the challenge at hand was close to home with inventions solving issues these students faced in their own lives or the lives of family and friends. For others, the projects ranged from rockets and robotics to clean water, saving the bees, encouraging exercise and mitigating hiccups. Read more about each of the participants or watch the video (55min) of President Obama speaking with all of the amazing students. 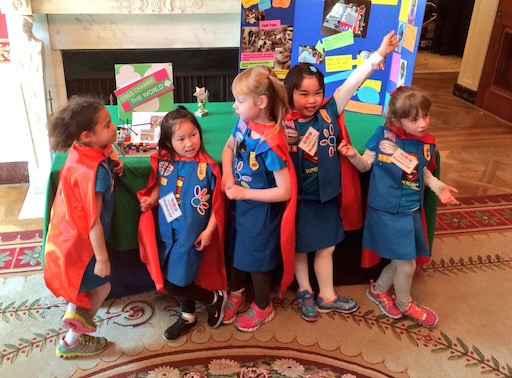 While there was certainly some mention of intellectual property and patents, I was elated to see an open source project from Mohammed Sayed and Kaitlin Reed (both 16 years-old) who used a 3D printer to transform Mohammed's wheelchair into a cutting-edge piece of technology. I was able to catch Kaitlin for a few minutes and she was quick to highlight the fact that making the project open source allows for it to be accessible and affordable. Big high-five to these students and we look forward to visiting the NuVu program the next time we're in the area!

The familiar sight of open source hardware led me to Lilianna Zyszkowski, 14, of Norfolk, CT. Lily and I spoke for quite awhile about her various projects and how she used SparkFun hardware in her prototypes. Lili's main project, the PillMinder, was created with a grandparent in mind. It uses capacitive touch sensors, LED lights and a networked microcontroller to remind people to take their medications on schedule. The device also alerts caregivers via Twitter and SMS whether the proper pills have been taken on time. As a Next Step Inventor with the Connecticut Invention Convention, Lili is also working with a Silicon Valley firm to bring the PillMinder technology to market.* 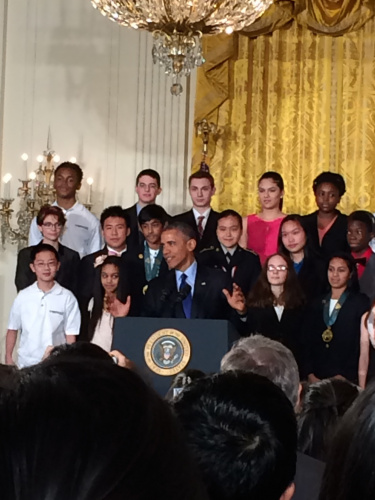 It was an honor to be in the ballroom for President Obama's address. He was genuinely enthusiastic, charming and even tossed out a jab at Congress to support his budget for research funding. President Obama highlighted these students' contributions to science and engineering while also emphasizing the importance of ensuring that there are laboratories and jobs for these students to pursue in the future. Admittedly, while I am biased in this regard, I dream of a day when science is a fully-supported bipartisan issue! 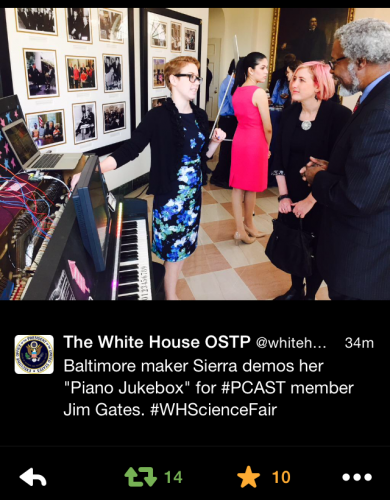 Until next time, White House!

According to Pete #42 - Resonance Circuits