It's a known trick that we can use LEDs in reverse. We'll explore how to use them as photodetectors with Arduino and create a simple demo that responds to hand swipes.

Using an LED as a light detector is nothing new (see this 2007 Electronic Design article). However, it seemed like a cool trick that deserved some more love, as it can be done with an Arduino and a single LED. I'll briefly go over the science involved, and then give a couple of example projects.

The best way to think about a hole is the absence of an electron in the atoms of the crystal lattice. Holes can move freely around the lattice, and can therefore act as a positive charge carrier. 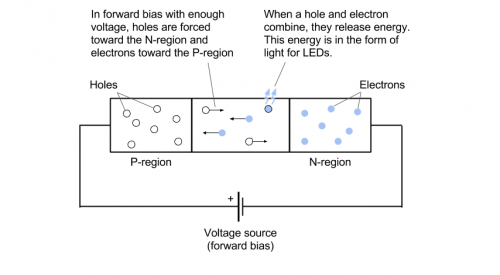 The fun begins when we reverse the process. If we apply a reverse bias across the PN junction (i.e. the N-region is at a higher potential than the P-region), the holes and electrons are pulled away from each other, creating a larger depletion region where no electrons or holes dare venture.

However, if a stray photon hits the depletion region, the photon may give up its energy to an electron in the lattice, which causes the electron to become loose from the atom and freely roam the lattice. This process also leaves behind a hole in the lattice.

So, when light hits a PN junction, a tiny current is produced. 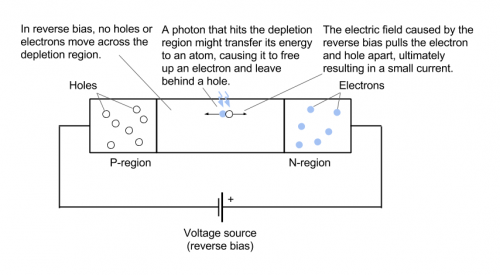 Measuring the tiny current produced by light falling on an LED is extremely difficult, especially with a microcontroller. However, we can still get an idea of how much light is falling on the LED.

Take a look at the second diagram in the Science section. The P-region and N-region are essentially plates holding a charge with some kind of insulator separating them. Does this sound like another electrical component? If you guessed "capacitor," congratulate yourself.

We can trick an LED into acting like a capacitor by applying a reverse voltage. This will charge the tiny plates (in the form of P- and N-region semiconductors). If we remove the voltage, the charge should stay (in theory). However, if light falls on the PN junction, electron-hole pairs will be formed, which then move to the opposite sides and cancel with other holes and electrons. This process, in effect, diminishes the total charge in the LED-acting-as-a-capacitor. 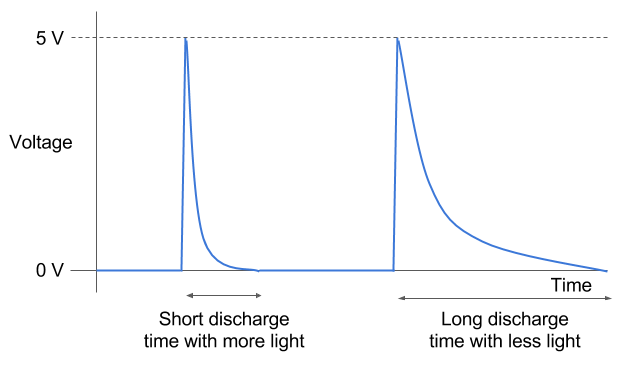 As the video shows, we can sense the presence of objects above the LEDs. In this case, we're just measuring the amount of light falling on the yellow LEDs to determine how much to light up the red LEDs.

To see how to sense light using an Arduino and one LED, see this project tutorial. Note that we put the LED directly into the Arduino's pins. I originally tried wiring the sense LED to a breadboard from the Arduino, but the inductance and capacitance from the wires and breadboard threw the readings way off. This means the input LEDs need to be fairly close to the microcontroller's pins to work.

If you want to get more adventurous with multiple LEDs, check out the Shadow Swipe project tutorial. This tutorial shows how to make the project shown in the video.

Want to get even more advanced? Here is a demo showing an LED array being used as a multi-touch input.

While we don't generally see LEDs being used as inputs (let's be honest, there are much better components for sensing light), they could be useful. What projects can you come up with that use LEDs as both light emitters and light detectors?