What's inside the crowd participation wristbands you find at major events?

In the first week of August my wife and I, along with a few friends of ours, decided to take a long trip up to Seattle. This vacation wasn't to sight-see and it wasn't to visit friends or family, no – it was to attend The International at Key Arena. The International is a tournament for the multiplayer, online battle arena (MOBA) video game Dota 2, where the best teams from around the world compete to claim a piece of the $20M prize pool (and mom always told us that playing video games wouldn't amount to anything). It took us close to 20 hours to get there, but it was a great event. Lindsay Sterling opened the show, there were upsets, there were stunning victories, and it was fun!

Here's the game stage, to give you an idea of the scale of this event.

Though we didn't compete, my group did have the pleasure of watching the week-long event. While at The International we received an unfathomable amount of swag. One item among the multitude intrigued me the most, and it was simply taped to the seat when we entered the arena. It was a small, white, crowd participation wristband that would light up when certain things happened during a game. The actions that set off the wristband included anything from the first blood (kill) of the match, a multi-kill, a special power being used or a team victory. We knew there were three LEDs inside and some sort of control circuit, but our biggest question was: How was it communicating? My group and I hypothesized simple and cheap wireless options, like the ESP8266, or some sort of geolocation system, but we couldn't come to a consensus. All we knew was that if we left the stadium it would cease to function. 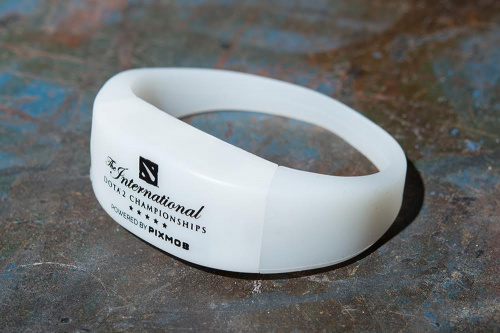 It wasn't until we were safely back home that I was able to actually research this little piece of plastic and rubber. I came to find out that the wristband is the Mutaforma V5 by a Montréal-based company called PixMob. These wristbands have been used in multiple, large crowd events like music concerts, Super Bowl half-time shows, E3 press conferences, the Olympics and corporate occasions. 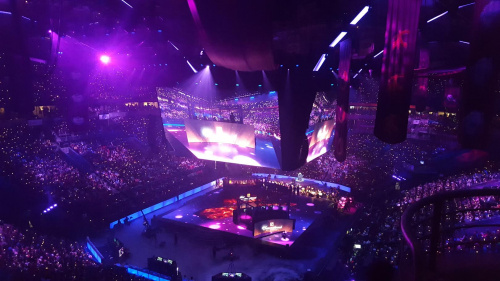 Wristbands ON! Yes, the stage is a giant screen.

Working in a large, open-source community, I've grown accustomed to finding schematics and datasheets quickly and easily. Unfortunately, that was not the case with the Mutaforma V5. It is perfectly understandable that PixMob doesn't want their wristbands imitated by a rival company because, let's be honest, when you do shows for Taylor Swift, you want to hold onto your intellectual property. As for me, though, I needed to know what was inside. 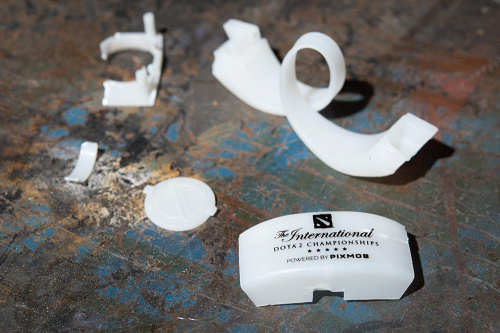 Like I said, it was hard to find any information on how to get into this little piece of techno-entertainment, so I had to go about opening it the old fashioned way, with screwdriver and hammer. Luckily, it didn't take long.

A bit busy on the top side

Now that we cracked open the outer shell, we can see three LEDs (one SMT, two through-hole), a microcontroller, an assortment of tiny ICs (some passives and what looks like a VREG), and a generic IR receiver. 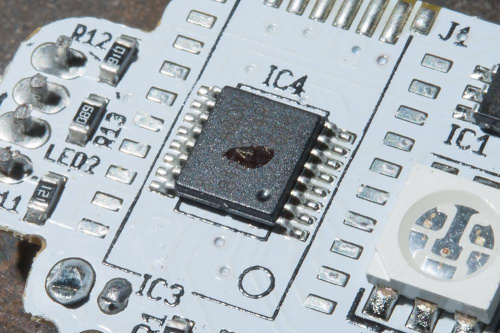 Let's take a closer look. The main chip on the Mutaforma V5 is an ABOV [MC81F4204](https://cdn.sparkfun.com/datasheets/Components/General IC/MC81F4204.pdf), a CMOS 8-bit MCU that provides 4K bytes of FLASH-ROM and only 192 bytes of RAM. The MC81F4204 is a very small chip that can surprisingly support its own weight, and makes for a reasonably cheap option for hand-outs. To its right is a simple, RGB LED. Between the three RGB LEDs provided on the board, we can assume that none of them are addressable, and to be fair it really isn't necessary. It's clear that this board has been designed from the ground up to be as simple and as cheap as possible. Quite effective, really. 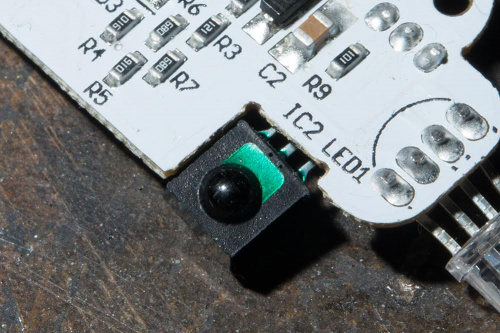 THIS is how the people behind the scenes were able to communicate with the Mutaforma.

The biggest question I had about this board has been answered, and simply. All communication to the Mutaforma was controlled wirelessly via this little receiver. After doing a bit of poking around on PixMob's website, I learned the set-up they had in the arena was pretty simple. A technician manning the light board also controlled a wide array of IR emitters installed inside the seating area of Key Arena. Here's a pretty neat diagram of their set-up. This explains why the wristbands stopped functioning when we left the game floor to use the bathroom or to go to concessions. 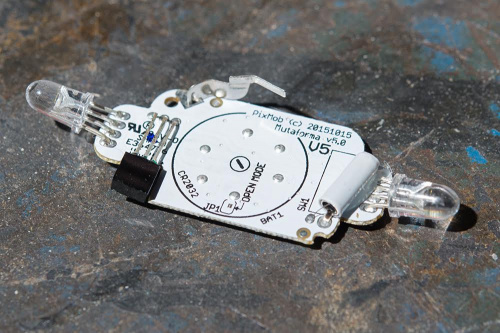 Not as busy underneath.

Flipping the board over, we can see where the two through-hole LEDs and the IR receiver make their connections, the battery pad for two CR2032s, and what we initially thought was a crystal – a basic, motion-sensing tilt sensor. There are actually a couple of things to note on the underside of this board, both relating to the tilt sensor. First, when the events concluded at The International, one last command was given to each of the wristbands inside the arena that told them to permanently switch to motion-sensitive mode. Whenever you move the wristband after the event, the LEDs light up in a random assortment of colors. The second item on the back of this board that I found interesting is the small jumper located on the CR2032 battery pad. Once connected, the jumper forces the Mutaforma into motion-sensitive mode, which is great for people like me who didn't receive that last command from the light board.

And that's pretty much it! It's a very simple solution to get the audience involved in the ongoing event. It certainly got my wife and I to pump our fists every time the wristband flashed red and gold to signify a "first blood"...social engineering at its finest.