Enginursday: BLE MIDI for the Tsunami!

Tsunami looping firmware is released, and connectable by MIDI. And why not MIDI BLE? It's done with the nRF52832 this week.

The Tsunami as a Looper

Jamie Robertson over at robertsonics.com has been whipping up some new firmware for the Tsunami Super WAV Trigger. The new firmware allows looping of files in weird ways, and it can be controlled through MIDI. But it doesn't stop there; he's written an app that sends MIDI control messages to run the whole thing!

The new app from robertsonics.com can control a wave-looping application for the Tsunami through MIDI.

The Tsunami can play up to eight loops at the same time, and each loop can be altered in real time. Right now, here's what can be effected:

Jamie has plans to implement pitch shifting without affecting loop length soon. Here's his blog where he'll post updates to the project.

I've experimented with the setup and have gotten everything to work seamlessly on a MacBook Air over BLE. The Windows app should work too, but only for wired MIDI connections...using internal loopbacks to patch the wired to BLE caused some problems.

To try out the system, get the materials from Jamie's blog:

I found that recording myself counting "1, 2, 3, 4" on a track helped me to understand the controls.

Let him know what you think!

While Jamie has been hard at work developing the firmware and app, I've been focused on building a MIDI BLE converter that's compatible, and have learned enough to kick out a tutorial on working with MIDI BLE peripherals.

When Jamie approached me, he was working with a BLE Adapter from Yamaha. It works great, but is kind of bulky when added to the Tsunami. Also, it's not programmable. What if I want to filter messages? Or redirect MIDI channels? Or build some wacky feature in??? I'm crazy enough to do it. 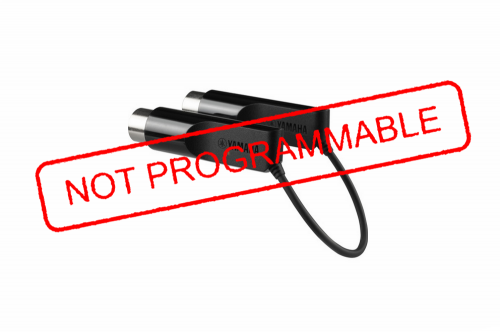 The BLE device I used instead is our very own nRF52832, and through the perversion of modern technology I was able to graft it to a MIDI shield with the R3 board shape. 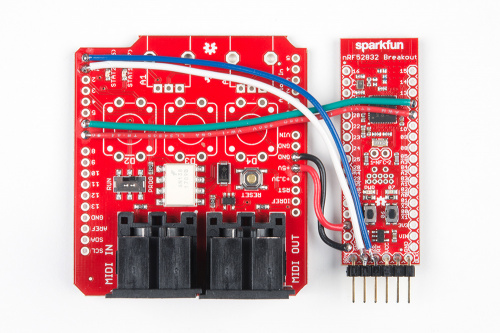 Here are the connections I made (from the BLE MIDI Tutorial):

Basically, the MIDI shield is run from 3.3V rather than 5V, and I've wired in the status indicators so I can have something to help debug with. The rest is code, and you can check out the tutorial for more info. It's only a few hundred lines.

"Hey, that's more bulky than the Yamaha adapter!" --- You

So what can we do about it? Well, if the MIDI cable can be removed and the output of the nRF52832 can be connected directly to the Tsunami, the MIDI shield isn't necessary at all.

The Tsunami has an opto-isolator onboard, but no jack. I've got a TTL UART output on the nRF52832. To get the inversions and voltages straight, I hooked it up as follows.

Connecting the TTL Serial output to a MIDI input, the signal is rail referenced rather than ground referenced.

Regular UARTs idle high, but the MIDI port idles low (or, zero current). To wire the two together, one end of the MIDI input is pulled to the same voltage as the UART output, and the UART is connected to the other. This way no current flows during idle, and current flows when the output is driven low.

The Tsunami also offers a regulated 3.3V output pin, so power can get to the MIDI input as well as the nRF52832 Breakout. Let's see if they've become friends. 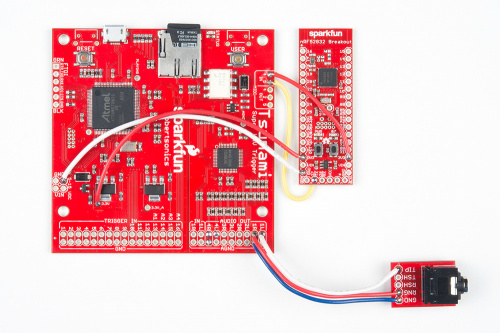 Tsunami and nRF52832 breakout together at last

A perfect match! This also offers a unique feature. The Tsunami's processor can be reset by a button press and the nRF52832 retains power. While swapping cards and playing around, the BLE connection stays linked!

The Tsunami as a MIDI Instrument

Don't forget, MIDI isn't a new feature for the Tsunami. As shipped, you can load files onto the SD card and play them when the keys are pressed.

That's it! You can even name them such that banks can be selected through the MIDI interface --- check out the Tsunami Users Guide for more information.

Shades of Gray in the 3D Printing Marketplace