Hello out there, SparkFans! My name is Rob Reynolds, and I am extremely excited to be the newest creative technologist here at Sparkfun. 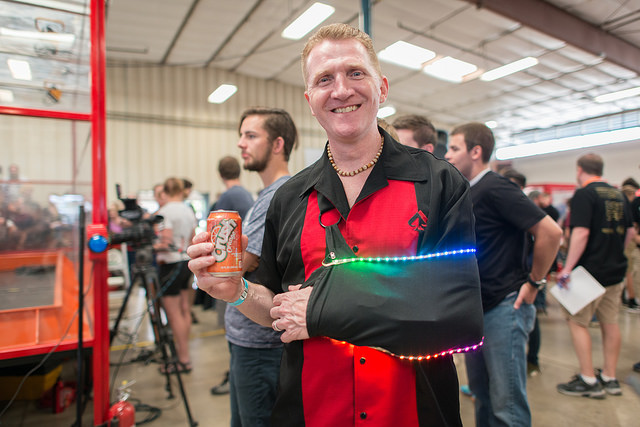 I’ve been with SparkFun for just under three years now, and am thrilled to take on the challenges and rewards of this new position. Many of you have already spoken with me, chatted with me or had email exchanges with me, as I’ve spent the bulk of my time here as a technical support rep. I also worked as the Emporium overseer, and for three months I had the great pleasure of being part of the inaugural SparkX team. If you were at Defcon 2017 you may have seen me, along with Nate and Joel, use a robot to crack a safe.

So where did I come from, and how did I wind up at SparkFun? It was certainly circuitous, and I would almost say it was not the normal route, but as the great Jeff Branson says, “There are a thousand roads to SparkFun.” I can start by telling you that my interest in hacking and engineering began at a very young age. In fact, I still have one of the very first book that my grandfather every gave me, The Best of Rube Goldberg. 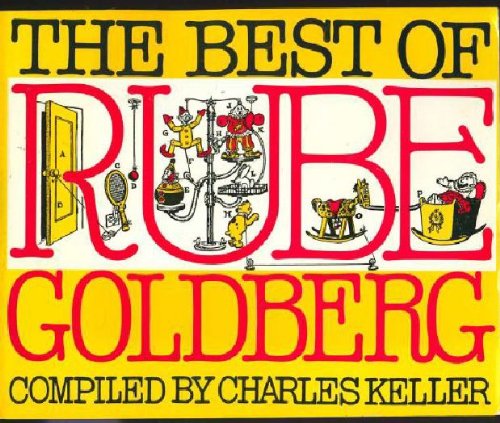 You can still find this gem on Amazon

This book definitely paid off in the long run, as I was eventually tasked with designing and building a large piece that required the owner of a joke shop to "...close the shop with an elaborate Rube Goldberg device." Here is one of the first attempts at running the entire thing.

Due to early success in a different field, I wound up pursuing a career in the arts. While most of my work was on stage (or occasionally on screen), if I was between shows I would work as a technician or designer, using my engineering knowledge to come up with solutions that others hadn’t considered. As Gene Kelly (as Joe Ross) says in Summer Stock, “Show business? There’s nothing else in the world. If I couldn’t be up here I’d be backstage or selling tickets.” And while I didn't sell tickets, I did more than my fair share of time backstage. I created sets and props for everything from small local theatres, to Mercedes-Benz Fashion Week in New York City. Once I moved out here to Denver, I did quite a bit of design and fabrication work for the Arvada Center for the Arts, including several cars and a helicopter.

I honestly don’t remember if I learned about SparkFun before moving from NYC to Colorado in 2007, or after I got here. I do know that I somehow heard about the very first Autonomous Vehicle Competition in 2009, and came up to attend. I met some really amazing people, both at the event and then at the after party at the famed Dark Horse in Boulder.

The following January, I learned that SparkFun was doing some crazy stunt they were calling “Free Day”, which absolutely blew my mind. How does a young company like this manage to give away $100,000 in product? (I wasn't one of the lucky winners that year. Or any year.) A few months later, and I was back up at SFEHQ for the second annual AVC. More competitors, more spectators, more snow (or was that year three?), and more time spent with really cool people. This was the first time outside of the theatre world that a group of people had felt like my people. I found myself purchasing more products from them, both for personal projects and for creative solutions in the theatre. I also took an all-day Arduino class at SparkFun, and continued to add electronics to many of my mechanical theatre builds.

I’m going to let you in on a little secret here: When you hear people talk about the magic of theatre, it isn’t really magic! What often looks like magic (seriously, have you seen Cirque du Soleil’s Kà?!) is in fact just an extremely clever use of mechanics and electronics. Much of what I did was theatre magic, so many of my builds will probably have roots in that. Using sensors or wireless technology to make something happen without the viewer understanding how or from where was usually what fell to me, and I revelled in the challenges.

Now, I know that most of you reading this probably have little to do with theatre, other than being an occasional patron (and thank you for that!), but much of that can be translated to other projects, especially at this time of year. With Halloween fast approaching, who doesn’t want to be able to trigger sound effects, or lightning, or even an animated scarecrow every time trick-or-treaters walk up to the door? Let’s be honest, dressing up like a scarecrow yourself to scare people is certainly not without its risks.

Why take a punch, when you can make a robot to do it for you? (Original footage via AFV)

As I begin to find my footing here, I will be counting on all of you to help me out by letting me know what you want to see more of, what you want to see less of, and what projects you've currently got on your workbench – or at least on your drawing board! Feel free to start in the comments below!

** Other useless bits of information about me:**