The End of an Era

With news that Maker Media has paused all operations and laid off its entire staff, what does this mean for the maker community?

If yo're reading this, I’m going to assume you are familiar with Maker Media. You’ve had a subscription to Make Magazine, you’ve been to a Maker Faire or you’ve built a project from one of their many guides. The bottom line is, if you know SparkFun, then it’s a fairly safe bet that you also know Maker Media. 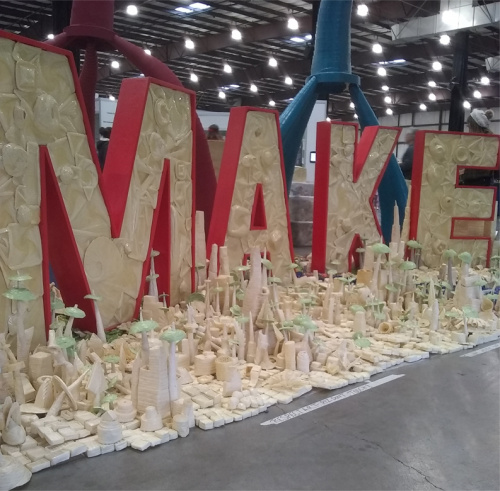 You may have seen this installation at any of the last three Bay Area Makers Faires.

As I’m sure you’ve heard by now, late Friday night Maker Media announced it had halted operations and laid off its entire staff. Company founder and CEO Dale Dougherty, who has been open about the struggles to keep the company in the black, confirmed the closure to TechCrunch.

While this may not come as a complete surprise, it is still a sharp blow to the maker community – and it truly is a community. I have many friends, colleagues, even occasional acquaintances whom I’ve met through this community. The medium didn’t matter – a welder, a stitcher, a glass blower, and all those makers who it’s difficult to even categorize – they all came together as a community, and not just at Maker Faires and Mini Maker Faires. We've kept in touch on forums and chat rooms, maker spaces and sometimes, despite our typically introverted nature, we would even meet up socially to grab a coffee or beer and share ideas and encouragement. 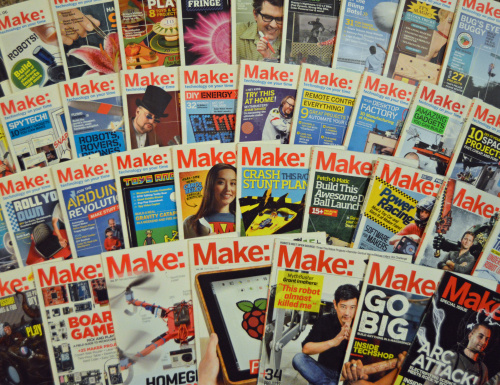 Some of my Make: Magazine collection. Remember how shocked we were with the new size of volume 37?

I remember the first time I found Make Magazine. It was almost summer, 2005, and as I waited for my car to get its oil changed, I wandered into Barnes & Noble and there it was. The cover boasted of a DIY R2-D2, and in the table of contents, it promised to teach me how to hack my old mouse into a light-seeking robot, and how to use a lens from my SLR camera to create a webcam telescope. I was hooked! I purchased the next two issues that year from a local news stand, and at the beginning of 2006 I started my subscription. As issue after issue continued to roll in over the years, I had great plans to build about 80 percent of the projects I saw, as I read each issue cover to cover. I probably started about 15 percent, and finished about two percent, but I loved every minute of it. Every success and failure, every frustration and new bit of knowledge re-ignited my passion for making, hacking and engineering. 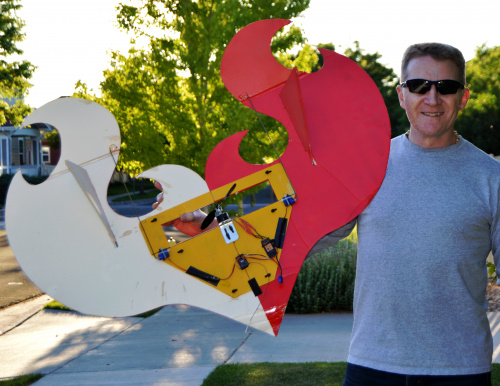 Inspired by the RC plane "The Towel" in volume 30, I made this SparkFun-themed variation. (Yes, it actually flies!)

I remember my first Maker Faire. I remember all of the Maker Faires I attended. It was at my third Faire that I bought my first 3D printer, because even though it was still more than I could afford, the discount being offered was so great I couldn’t afford NOT to buy it! I saw amazing projects and met incredible people and was inspired a thousand times over in a thousand different ways! I felt like these were my people, this was where I belonged, and everyone there, whether presenters, exhibitors, or attendees, brought something interesting to the table. 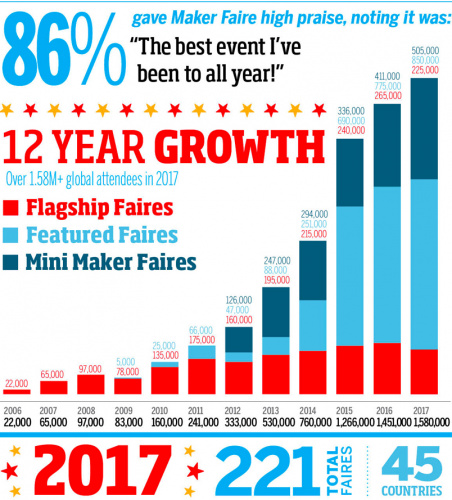 Attendance had started to level off in recent years, and actually began decreasing at the flagship Faires.

As the above graphic from Maker Media shows, attendance at Maker Faires (and interest in the maker movement, one can assume) has continued to grow. However, attendance at the Bay Area and New York flagship Faires had in recent years leveled off and actually declined, and although there continues to be an increase in interest around the world, interest does not always equate to profitability.

With the plethora of free online content available to makers, and the increasing costs of publishing a printed periodical, subscriptions fell. Additionally, the cost of producing an event the size and scope of the flagship Maker Faires became unrecoupable, with major sponsors like Intel, Microsoft and Disney exiting not only the Maker Faire, but the entire maker market.

Dougherty still believes that even though the company may have failed as a business, it is certainly not failing as a mission. In his interview with TechCrunch, Dougherty said, “We’re trying to keep the servers running. I hope to be able to get control of the assets of the company and restart it. We’re not necessarily going to do everything we did in the past but I’m committed to keeping the print magazine going and the Maker Faire licensing program.” He went on to say, “It works for people but it doesn’t necessarily work as a business today, at least under my oversight.”

While we may very well have seen the last Bay Area Maker Faire, at least in the form with which we’ve grown familiar, it’s important to remember that there have been over 200 owned and licensed Maker Faire events (featured and Mini Maker Faires) per year in over 40 countries. Even if we have, in fact, seen the last of the Bay Area and World Maker Faire New York events, I think it’s safe to say that in one form or another, there will continue to be gatherings of makers. We will still meet up, share ideas, learn from each other and help push each other to new heights, and if Dale Dougherty has his way, they will remain under the Maker Faire flag. Maker Media and Make Magazine have done amazing things for the maker community, and they will forever have my gratitude.

APRS: Robust Wireless in an Age of IoT