A quick recap of all that Supercon 2019 had to offer.

In the wake of Maker Faire going away, it's inevitable that other events will soon take the spotlight among electronics enthusiasts. I see the Hackaday Superconference stepping up in this regard. The three-day conference (loose term) hosts a number of workshops and talks on a large range of topics. I use the term conference loosely as it's more of a gathering of electronics enthusiasts and makers with structured talks - truly something for anyone who may identify in one of those groups. So while it might not cover the range of topics that Maker Faire once did, it definitely fills a good chunk of the void.

As mentioned, Superconference consists of three days of workshops, talks, and general discussions and convening. What really sets Supercon apart from other events and conferences is the large area dedicated to working on projects or badge hacking. This also draws small group discussions that I feel are lacking at most conferences I attend.

I've been lucky enough in that for the past two years, SparkFun has spent its sponsor ticket on me. While I'm technically there on behalf of SparkFun to get a pulse on what people are finding interesting and what's the cool or new, it makes for quite the enjoyable trip to Pasadena. And while I try to carve out after-hours time to do some sight-seeing in the area, I always find it difficult to peel my attention away from Supercon. It's too fun and interesting.

Day one goes down at the headquarters for the parent company of Hackaday: Supplyframe. Mostly it consists of a few early workshops and check ins, but this presents a pretty cool opportunity to talk with others about what they're working on or start exploring the conference badge.

For those out of the loop, interactive conference badges have become a feature of a lot different electronics-oriented conferences in the past few years. This year, the Hackaday Supercon badge was something to behold. Featuring a Lattice Semiconductor FPGA, a fairly large screen and enough features and work spent on it that it warrants a separate article. So when the badge itself is powerful enough to run Tetris, it makes sense that a good a chunk of the conference is dedicated to the badge. Areas with tables and soldering irons provide a place for those who want to really dig into the badge and create something unique with it (more to come on that). 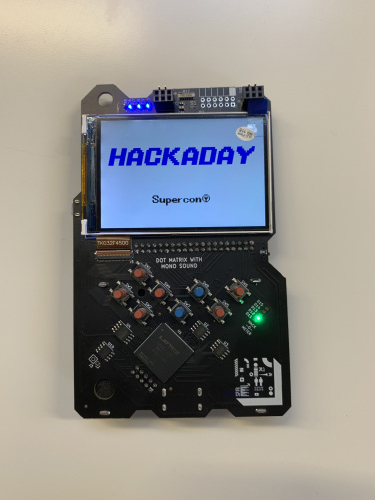 The workshops present their own unique aspect to the conference. Now, to be fair, it could just be that the conferences I've been to focus more on the companies attending, but the more free-form nature of the workshops seems a lot more appealing to me. I have yet to be able to sign up for one, but the topics such as "USB Reverse Engineering" always catch my eye. The workshop sizes seem fairly limited, so it's easy to hear the instructor and asking questions is a much more attainable task (I've been in some 100+ attendee workshops that made for a bad time). It seems as though I'm not the only one who appreciates the format and topics as they fill up fast. So if you plan on attending, register for the workshops you want as early as possible.

Day two happens at the Los Angeles College of Music down the road a bit (but still in Pasadena). While Supplyframe has a cool, co-working-type space there, the big differentiator is a room big enough to hold larger talks and the main stage. In addition, a smaller second stage is set up in the co-work space (but still pretty big). The topics of the talks are all over the map - everything from reverse engineering older pieces of equipment to learning the hot new trends in electronics, and even covering some very unique projects you might have seen on the Hackaday blog. With the two stages, it presents a bit of need for planning to make sure you're going to see the talks you would like to see. To get between the two stages, you have to go outside the building to an alleyway and then back in. The alleyway is where all the tables for badge hacking and general project work (along with the workshops) reside. I think this is one of the most special parts of the conference. 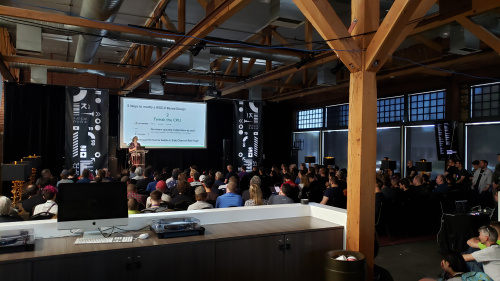 This brings me to another cool part of the conference: they feed you. Above I talked about trying to carve out some time to see the sights of Pasadena and do some tourist stuff. This included hitting some of the incredible looking restaurants I would walk by everyday from the hotel to the conference, but the power of free food and good conversation proved too powerful. It presented a time when most attendees' attention would be free and you could easily meet new folks or those who you only know from the web. Most conferences I attend focus your attention to talks, workshops and vendors exhibiting. There's very little time or opportunity to talk with other attendees. The meals at Supercon provide a great opportunity for this. I would even argue it presents a better opportunity than the parties they would host every night. 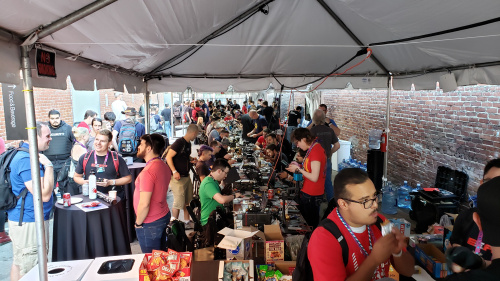 The big event of day two is the presentation of the Hackaday Prize, which presents an incredible opportunity to the recipients every year. This year it went to a project called FieldKit, which is working toward an open source hardware and software platform for collecting and sharing field data in environmental sensing. As a small aside, more than one person told me how excited they were that FieldKit won with what they're doing for the citizen science and environmental sensing communities. The team won the grand prize of $125,000, which will hopefully provide a solid launchpad for taking the project to the next level.

Day three looks a lot like day two - more talks and workshops at the same location. The big difference is the badge-hacking prizes presented at the end. If the workshops and talks didn't convince you how talented the people who attend Supercon are, this will. It's amazing to see what folks are able to accomplish with these badges and their spare time during the conference (of which there is very little). Of the things I can remember, there were people running VGA monitors off the badge, someone had a PowerPoint presentation running on theirs (because all conferences need PowerPoint), and a bunch more incredible things a conference badge shouldn't be able to do (if you were there and remember others, please put them in the comments below, I'm seriously spacing on them). Best of all, the prizes were just as impromptu as the projects, with the moderators judging the winners by audience applause and handing them a rolled $100 bill. 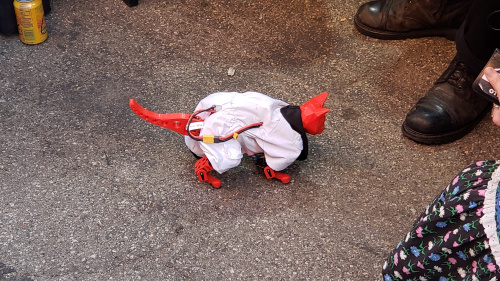 Supercon has what you're going to get from most conferences, but there's something different about it. It could be that I just go to the wrong conferences, or don't pay enough attention at them or that Supercon pertains heavily to my interests, but I think presents a different atmosphere. It's less of a conference and more of meet-up of internet friends (if you plan on attending, have your Twitter handle ready, everyone is going to ask for it). The conversations I have there will remain etched in my mind for years to come. The talent and brilliance of every person I encounter is incredible, along with their willingness to share such. If Supercon has been something on your list to attend, I highly recommend it. 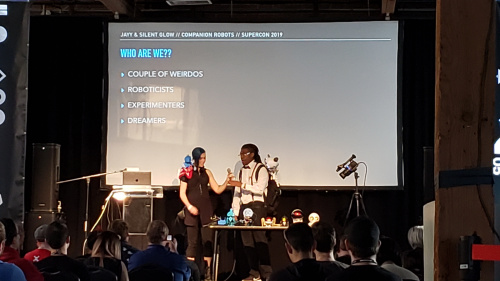 Best of all, Hackaday puts all their talks up on their YouTube channel. Check them out if you have a free moment. Additionally, feel free to share your thoughts on Supercon in the comments below. I'm always interested in other perspectives as I have only attended in a certain context.