Using the new SparkFun ProDriver, a pair of stepper motors and some mirror acrylic, I created a solar cooker that tracks the sun as it crosses the sky, guaranteeing optimal efficiency from your solar barbecue.

Twice every year, in February and September, the world’s top fashion designers, as well as younger up and coming designers, descend upon NYC to show off their designs for New York Fashion Week. Designers will easily spend six figures to get the set and venue to look exactly the way they want to best showcase their collection, in a show that usually lasts for no more than 20 minutes. After that, much of the materials are reused or recycled, but some of it deemed not reusable simply gets thrown out. This can be a maker’s dream.

I spent seven years working with one of the top companies in NYC responsible for designing, building and installing everything in those fashions shows that wasn’t clothing - the backdrops, the prosceniums, the runways, the lighting. We used every conceivable material, so I had access to lots of those materials, saving them from the dumpster and giving them new life in a string of hare-brained projects.

This is where I built my first solar hot dog cooker. To say it was primitive in its construction would be overselling it. Some scraps of wood, a scrap of mirror acrylic, and for the skewer a steel rod that I wiped off with a paper towel, and that was it. To pan the unit, I just dragged it slightly to the west. And to tilt, I had a piece of wood that I just screwed into the side of it, and adjusted by screwing it in at different heights. Now, years later, I decided it was time for an upgrade. 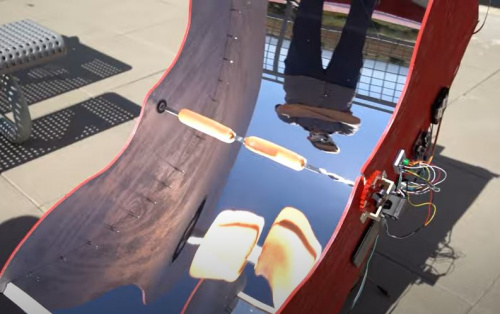 Me, upside down and somewhat distorted, in the reflection of the SparBcue solar cooker

Luckily, with the release of our new SparkFun ProDriver, controlling the movement with a pair of 125 oz.in stepper motors was incredibly simple. Four photocells measure the light discrepancies across both the X and Y axes, and that information is used to keep the unit pointed directly at the sun.

As for actually cooking the hot dogs (or whatever you decide to throw on the skewer) we rely on the beauty of the parabola. The sides are ¼” plywood with minimal 1”x2” framing, and ⅛” mirror acrylic bent into a parabolic arc, with the skewer at the focal point. I laid out the points on one of the sheets of plywood, then clamped the two sheets together and drilled small holes along the arc, with another set of holes slightly inside the first. Through these holes I put small finishing nails to hold the bent acrylic sheet in place. 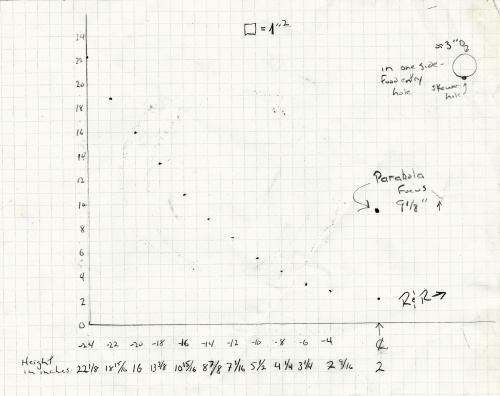 My original layout sketch for the parabolic arc for my Solar Hot Dog Cooker v.1.

A basic lazy Susan swivel plate is used to pan the device from east to west, belt driven from one of the stepper motors. For tilt, a threaded rod on the second stepper motor changes the angle. This is perhaps more precise than this build requires, but seemed the simplest way to achieve the necessary movement on this axis. A single hinge point at the front and dual hinge points at the rear allow for proper tilt, with the dual rear hinge points guaranteeing that the threaded rod remains in alignment throughout the entire range of the SparBcue. To track the sun, I’m using four photocells, one on each corner of the cooker, in 3D-printed enclosures. The application is quite simple - take measurements from all four sensors, then do some averaging. If the top is darker than the bottom, tilt up until they’re once again evenly illuminated. Then do the same thing for left and right. I had tried a build like this several years ago using a pair of servo motors, but this was the first time I had tried it on this scale, and with stepper motors. It actually works quite nicely. When aligned to the sun, you can see beams of light, as well as shadows from the nails, all converging on the focal point.

During the construction, I learned that one of the two 125 oz.in stepper motors was faulty. As I knew I wouldn’t be able to get another before the build had to be completed (unless I wanted to shoot the video with the device untested), I went with a slightly smaller stepper motor with less torque. While it did work, it made a pretty terrible sound that indicated that it probably wouldn’t be a very good long term solution. As soon as I get another 125 oz.in stepper motor, I’ll swap that back in.

The SparBcue is currently powered by a 5V lithium ion battery pack for the RedBoard and continuous rotation servo, and a 12V battery to power the two stepper motors. The steppers need a lot of torque, and therefore a lot of power, so I don’t know that I’ll be able to change out this power source. However, to run the board, I’m planning on swapping out the battery pack with a solar panel. I also need to do a little work on the gear on the skewer. While the gears themselves are fine, their attachment to the skewer is questionable at best. I'm also considering adding a potentiometer to allow for adjustment of the tolerance on the fly. An additional pair of potentiometers might be useful for getting a rough focus towards the sun before engaging its tracking. Hey, if something's worth engineering, it's worth overengineering, right? The perfect time of day - SparBcue in the sun, chair in the shade, and cold drink in the hand (you'll have to take my word on that last one).
View Comments (5)
Share
Use this URL to share: