Why do I get winded so quickly when I go running? Does my blood oxygen have anything to do with it? Let's put together a few components and see what we can learn!

I have been active for the bulk of my life - doing team activities like lacrosse and wrestling, and more individual activities like rock climbing, parkour and cycling - but the one thing that brings me no joy is running. Regardless of how much or how well I train, I seem to be unable to increase my endurance to anything that might prove even remotely beneficial during the zombie apocalypse (don’t forget rule #1).

Unfortunately with things the way they are now, more isolated activities like running seem to be playing a larger role in my life. While suffering through a recent morning run, I found myself contemplating just why running kicks my butt so hard. My thought was that perhaps it has something to do with the half dozen times my nose was broken. The first break was a lacrosse injury, moving my nose from the center of my face to somewhere under my right eye. The surgeon moved it back to about the middle of my head, but that and subsequent breaks left me with a severely deviated septum and an intake capacity of somewhere around half of what it should be. Could this be hindering my O2 intake enough that it has this profound an effect on the blood oxygenation? If only there was a way I could find out...like with the Pulse Oximeter and Heart Rate Sensor. 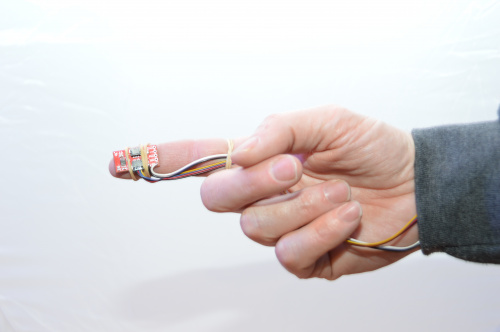 The Pulse Oxygen and and Heart Rate Sensor, attached with the greatest of care, to my finger

I wanted a fast and simple build, since I had a day and a half before we were predicted to get our next snowfall. I grabbed a Pulse Oximeter and Heart Rate Sensor, Qwiic OpenLog and a Redboard Qwiic. I had to do a little soldering, as the sensor is not a straight-in Qwiic sensor, even though it does use the Qwiic connectors for its I2C communication. It also requires two other lines to be fully operational. 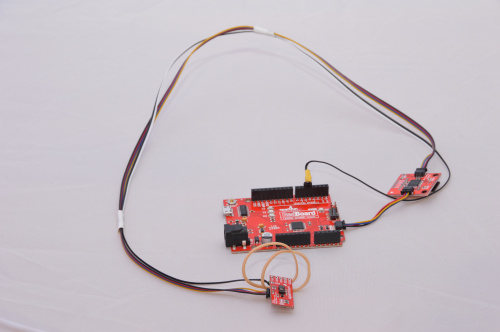 The setup, with a 500mm Qwiic cable to allow the Redboard to be placed further up my arm.

The code here is a simple mash-up, a little from column A and a little from column B. I started with the basic example from the pulse ox sensor, as that is the more in-depth code. That’s usually my M.O. when combining sensors or breakout boards - start with the most, so you’re only adding the least. In this case it was as simple as changing Serial.println(variable); to myLog.println(variable);. Well alright, there is indeed a bit more to it than that, but you get the idea.

There’s no way around it: I’m going to have to go for a run. For reasons I cannot explain nor am I proud of, I had the armband from an old MP3 player sitting on a shelf right across from my desk. I have no idea why I still have it, since I’m pretty sure the MP3 player for which it was designed no longer exists. But it seems perfect for this application. Since this is for science, I wanted to get a baseline. So the first thing to do is just sit here. You know, for science. Over the course of two minutes, my baseline readings averaged 57 BPM, with a pulse ox of 99. Then I hit the streets.

Trying to get this run in before that snow gets here

Here’s what I learned. No matter how careful you are, or how well you fasten the Pulse Ox sensor to your finger (without it being too tight), the motion of your arm has an extremely adverse effect on the readings. For my first run, I wound up with a few readings in the beginning, followed by three minutes of no readings at all, and then a few readings at the end when I stopped to turn the monitor off. I tried a few more things, and finally had to do sprints. I did twenty second sprints, then stood still for ten seconds to get a few readings, then sprinted some more. Even with that, the result surprised me. My Sp02 never dropped below 94 percent. Being a little confused but a lot curious, I dug through a few white papers on the subject, and learned that according to some research, Sp02 levels don’t drop significantly until the heart rate hits about 175 BPM. Looking at my data, it appears that during this experiment, mine never got above 162.

Interestingly enough, and in the name of science and current events, I also took a quick run without a mask, and there was absolutely no difference in my blood oxygen saturation between the two runs (so wear a mask!). 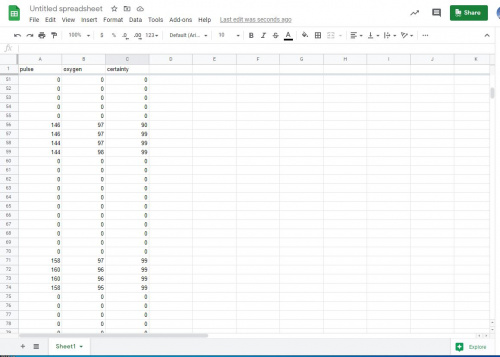 You can see when I was running and when I stopped to get a reading.

I guess in the end, this just leaves me with more questions. Did having my nose smashed into my face so many times that my ENT can’t even insert a scope to do a flexible laryngoscopy make it harder for me to get enough oxygen? Do I regularly get my pulse above 175 when running for real, but not during a sprint experiment? Should I just do the Usain Bolt thing, and never even try to run a mile? What do I do with the information I did collect? I don’t suppose my insurance will cover a rhinoplasty for medical reasons, even if I explain that it’s crucial to my current scientific experiment involving blood oxygenation and SpO2 decline over time under exertion (that sounds officially scientific, right?). In the meantime, I’ll just keep running until I’m comfortable getting back in the parkour gym, or the rock gym, or anyplace else where I can disguise exercise as playing!