Jesse is back again today to talk about his latest accomplishment in robotics!

Jesse Brockmann is a senior software engineer with over 20 years of experience. Jesse works for a large corporation designing real-time simulation software, started programming on an Apple IIe at the age of six and has won several AVC event over the years. Jesse is also a SparkFun Ambassador.

Make sure to check out the rest of Jesse's posts that he has written about making an Autonomous Lawn Mower and more!

On December 12th I competed in a virtual competition put on by Dallas Personal Robotics Group (DPRG). There were two different types of competitions. The first was an open video competition where you submitted a two- to four-minute video on your autonomous robot, and the group voted for the best one. My video is at JRover Maxx competition video (thanks to my wife for providing the voiceover work).

The second part of the competition was a virtual line-following competition using a Line Following Simulator (LFS) created by DPRG member Ron Grant. Three different difficulty level courses were provided, and you could compete in multiple courses. By far the Challenge course runs were the most impressive! This included an interesting approach to replicate the movement of a mecanum wheels rover.

Videos, and more information about the results of the competition are available on the DPRG site. I would like to thank DPRG for a chance to compete in such a fun event; hopefully they have more in the future.

I had so much fun doing the competition video so I decided to make another video named JRover Greatest Hits. This one is more about destruction and running things over than grace, but it gives you some idea of my SparkFun AVC rover motto: Go around, go through, or go over.. just finish! JRover Maxx was designed to take a hit and keep going and it does, most of the time. But sooner or later you find the limits, and make a design change to eliminate the weaknesses. 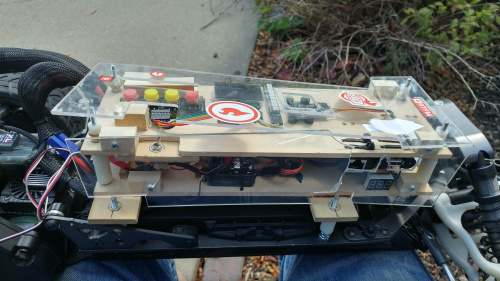 I will have more fun projects coming next year, from autonomous push mowers, to RC electric go karts and more, so stay tuned for future blog posts. Stay healthy, happy and enjoy the holidays!

As a thank you for reading this far, I would like to let you know I have a special promo code you can use to get 10% off any SparkFun Original product. Just use ORIGINALRED2020 during checkout. This code is good through the end of 2020 so you only have a bit more time to take advantage of the code, but can only be used once per customer. Thanks for reading - I hope I can start attending STEM shows next year and show off my hard work on this and other projects I have been working on.