Last week, we gave a follow-up post about the Reverse Geocaching Puzzle Box. Since then, we've received a number of emails about other similar projects. A lot of them were very cool, but one in particular stood out - the AVR Treasure Chest. 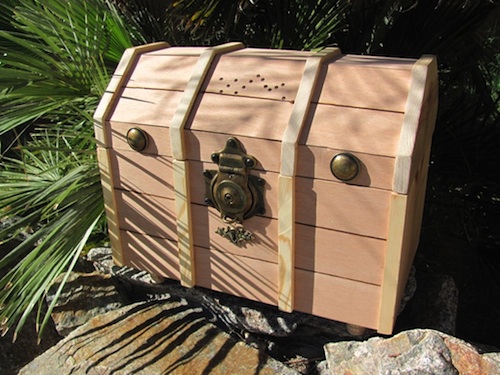 Not your average treasure chest.

Originally, the designer created a treasure chest for his sons that had an electronic lock that required his kids to follow clues to open. The chest contained a couple of Nintendo 64 games. Fast-forward to today and his new chest is just a tad-bit more complex.

For one, the chest has a tray that holds an iPod Touch that plays video clues when prompted. Hidden behind one of the decorative buttons on the front of the chest is a rail that pops out holding a written clue. It also has a sound recognition feature that requires playing the correct tune with an Ocarina (Zelda, FTW). In addition, it features an automatically unlocking latch and a key recognition system. Basically, it's the most high-tech treasure chest this side of the Black Pearl - Captain Jack would be downright jealous. Read all about the project here - awesome work!

To Infinity and Beyond...the SIK Programmed with Arduino (Part 3)