Visualize the frequencies of life with the SoundPuddle

The SoundPuddle is an interactive environment of visual-acoustic synesthesia. Art and electronics come together to bring an experience of light and sound to those within its confines.

Electronics and art go hand-in-hand, especially in the case of interactive art. To create an art piece that interacts with the environment and objects around it, be it presence, motion, light, smells, sound or color, you need microcontrollers and sensors providing the piece with some level of artificial intelligence. Arduino development boards are often the go-to boards for artists who are new to electronics. However, art projects are often resource intensive. When it comes to projects that require lots of computing, be it for reading sensors, doing complex math or controlling large numbers of LEDs, processor speed is often a huge concern. While the Arduino is great for getting started, it has limitations. Running at 8 or 16MHz is fine for most beginner projects, but sometimes you need to up the ante. 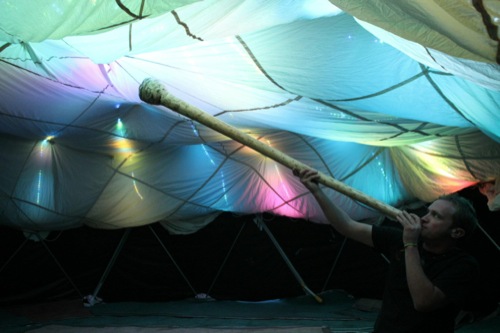 That is exactly what John English, an engineer at a local Boulder company, Boulder Engineering Studio, did when designing his interactive art environment, the SoundPuddle. John wanted to create an environment in which you could literally visualize sound. This would require reading in sounds via a mic, sampling those sounds to break them up into different frequencies, and then sending out colors to corresponding LED arrays. Each of these steps requires a huge amount of processing, and the ATMega328 on the Arduino just wasn't going get the job done. Enter the Papilio. The Papilio is an FPGA featuring a Xilinx Spartan 3E for the processor that is capable of running at 96MHz. The Papilio was configured to run the Arduino compatible Zpuino platform, a power 32bit microcontroller softcore. With the Papilio and Zpuino together, John was able to create a more fluid and realistic-looking visualization. 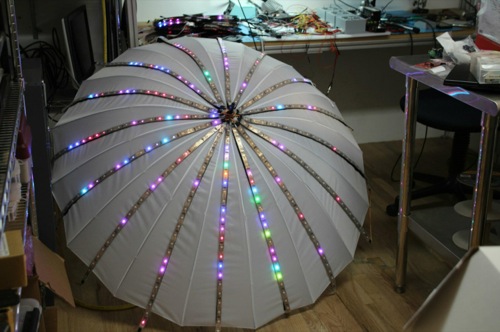 John explains all the inner-workings of the SoundPuddle on his site, and you can see all his code on his github page.  There are also lots of pictures and video of it in action on the site. The SoundPuddle made its debut at Apogaea, a collaborative arts and music festival held in Colorado. It made quite the splash, and the team who put it together is looking to improve upon it to send it to festivals/gatherings/events all over the nation. That's where Kickstarter comes in. The SoundPuddle is currently nearing the end of its Kickstarter campaign. With your help it could become a testament to what is capable in the realm of DIY interactive art displays. Check out the video below, and with enough help you might just see the SoundPuddle at the next festival you attend!