"Space... the final frontier." I think it's safe to say that many of you reading this were inspired to be makers by those words or others like them. For most of us, our feet are firmly planted on the ground in our daily lives, but we still take the time to cheer on our Mars rovers, mourn our departed heroes, and wonder when (not if) an above-average geek can get personally involved in hacking the final frontier. 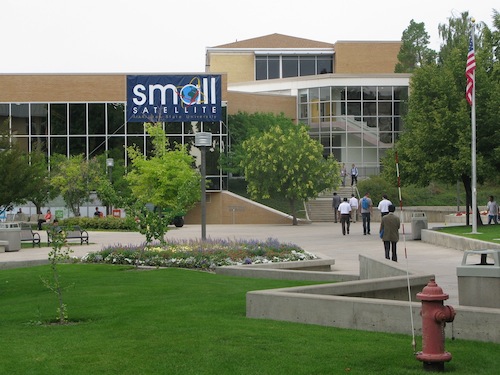 It's in this spirit that Pete Dokter and I recently took a road trip to the AIAA Small Satellite Conference, which is hosted each year by Utah State University in the lovely town of Logan. This conference was started 26 years ago by engineers who realized that the commercial microelectronics revolution here on earth could completely transform the satellite industry. This has turned out to be true, but few predicted that it would be students leading the way. 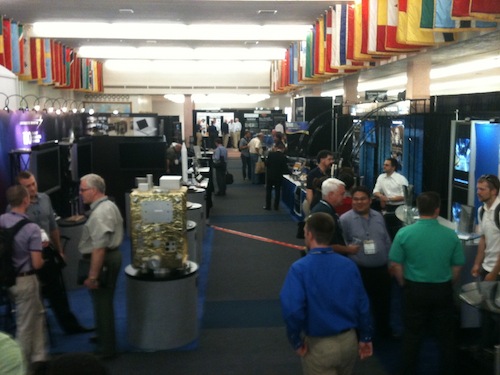 Why is putting something into space so hard? To stay in orbit for any reasonable amount of time, your satellite must be lofted above the bulk of the atmosphere (to an altitude of 200km / 125 miles or more), and accelerated horizontally to around 7 km/s (17,000 miles per hour). This takes a huge amount of energy, packed into a lot of rocket. As if this wasn't difficult enough, your satellite must also survive the launch, separate from the rocket when it's supposed to (absolutely not before), work in high vacuum, charge itself from the sun, stay warm (or cool) enough to function, point itself in the right direction, be able to communicate from hundreds or even thousands of kilometers away, deal with the occasional radiation-induced software upset, and finally perform whatever mission it was designed to do. All of which makes space a very expensive hobby. 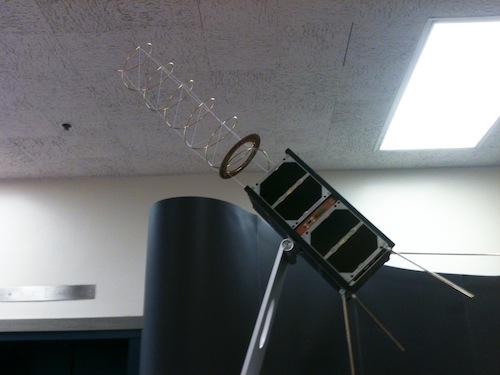 One way to reduce mission cost is to build your satellite as small and light as possible, which reduces the amount of energy (and money) it takes to get it into orbit. This is where microelectronics come into play. The same hardware that makes your cell phone so small and powerful can also be used to make small, powerful spacecraft. (In fact, there's an effort underway at NASA Ames Research Center to build a satellite out of a cell phone.) But it has taken some time to get to this point. Traditionally, spacecraft were only built with radiation-hardened, space-rated parts, most of which were several generations old due to the huge amount of work it took to qualify anything. It took a leap of faith to embrace the idea that commercial parts were being manufactured with a native reliability level good enough for spaceflight, and it was largely students leading the charge since their budgets didn't allow for anything else. 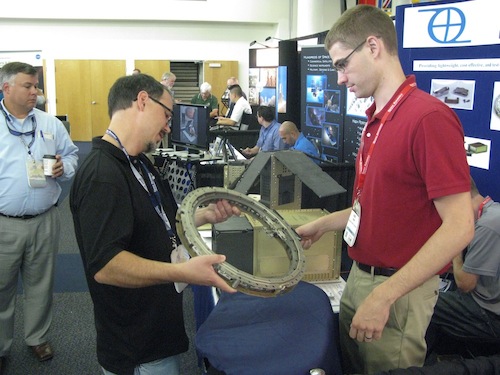 Another advantage of building small is that you may be able to hitch a ride on an existing launch. In the past, the people paying for the very expensive primary payloads have been reluctant to allow this, since sticking anything extra onto the rocket constitutes a risk to their mission. (Their nightmares are filled with student-built satellites coming loose during launch and rattling around next to their billion-dollar spacecraft.) Tireless work by the small satellite community to prove the value and safety of ride-sharing have made this an increasingly common occurrence on both government and commercial flights. 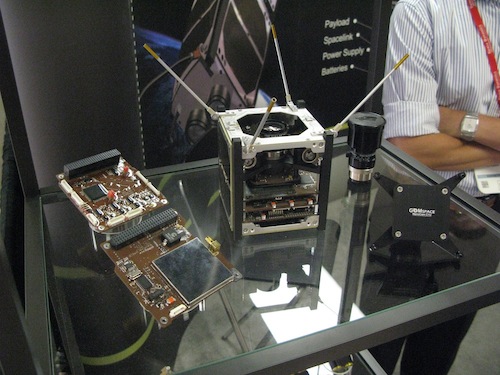 But the biggest turning point in the small satellite revolution was an idea proposed by Cal Poly in the early 2000s for a standardized small satellite form-factor. Just as the Arduino standard enables a huge community to work together, the CubeSat standard allows people to build on the work of previous efforts without having to reinvent the wheel. The basic CubeSat is a 10cm x 10cm x 10cm box that weighs no more than 1.33kg, but these dimensions can be multiplied LEGO-style to make spacecraft that are long and thin, or broad and flat. A huge advantage of building a satellite in a CubeSat form-factor is that it can slide straight into a thoroughly-tested deployment cartridge mounted to the rocket. Reliable deployment mechanisms are extremely hard to design, and bypassing this effort makes the satellite builder's life much easier, and gives the primary payloads peace of mind. The CubeSat standard was originally developed to help educational institutions more easily develop space missions, but its runaway success has caught the attention of even the largest aerospace firms, many of which are developing (and selling) their own compatible platforms. 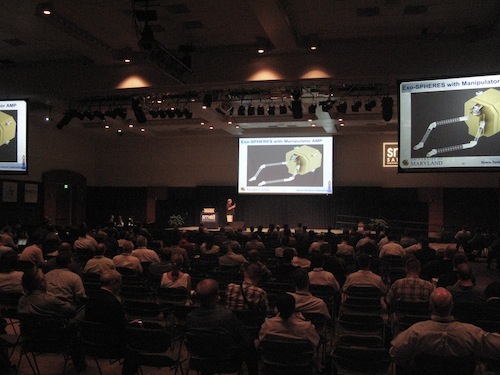 The conference itself is split between technical sessions where students and professionals present their recent work, and vendor booths offering all kinds of products and services. The technical sessions were amazing - building a small satellite is quite a challenge, since the small size means you'll often be constrained by a lack of volume, power, and aperture. But clever solutions are being found for all of these problems, from satellites that unfold like origami into large solar panels, antennas, and even optics, to miniature electric thrusters with enough Isp to leave orbit for deep space (albeit very slowly), to communications systems able to downlink data at broadband speeds. The ever-falling cost of access to space is also enabling missions never considered before, such as remote sensing and imaging for developing nations, more data points when studying the complex and dynamic space environment, even (someday) services like live Google Earth. Not to mention the educational opportunities that come from university and even high school students designing, building, and operating their very own spacecraft. 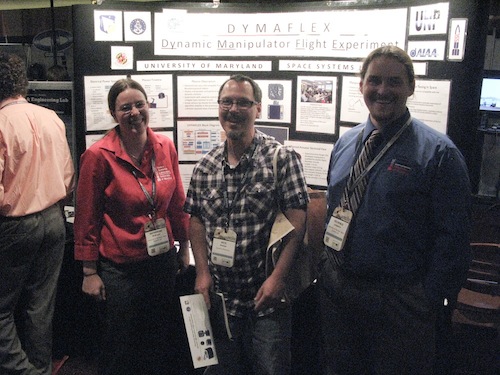 The vendors were also great fun to talk to. The small satellite business climate is a mixture of older aerospace companies working to adapt to this new market, and new, small companies trying to turn former university and hobbyist work into a going concern (sound familiar?) Instead of everything being custom-made as it was in the past, the standardization of interfaces and especially the CubeSat form factor is leading to SparkFun-style websites where you can add components, subsystems, and even whole satellites to your shopping cart. The prices, which run $10k to $20k for a very minimal spacecraft (and increase quickly from there), are still beyond the range of most individuals, and when told by vendors what their parts cost, Pete exclaimed "you've got to be frakking kidding me!" (or something like that) more than once. These prices are based on a lot of factors: the high cost of R&D (often conducted on previous spaceflights), designing, building, and testing for extreme reliability, certified parts and materials, low production volumes, etc. But Pete makes a very good point that SparkFun builds similar things for a fraction of the cost that with a lot of testing could be the starting point for a DIY project. 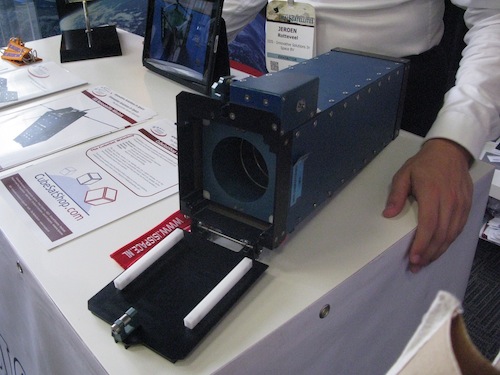 As we said earlier, building a satellite is only half the battle; you also need a ride to orbit. In the past, this was largely based on who you knew (and the importance of your mission to those people), and the costs were different for everyone. This year, companies are actually advertising fixed flight costs, which range from $125k for a 1U CubeSat to Low Earth Orbit, to $54M for your very own Falcon 9 (that's actually a really good deal). For educational and non-profit groups there are even better deals; NASA's CubeSat Launch Initiative (CSLI) flies CubeSats for free on government flights. These opportunities are awarded based on mission relevance and the necessity for spaceflight, so they require a good foundation and proposal-writing skills, but they're flying spacecraft right now. NASA also has numerous other opportunities for orbital and suborbital research including high-altitude balloons, reduced-gravity aircraft, rockets and (soon!) manned vehicles like SpaceShipTwo, and even rack space aboard the Space Station. The rides are out there. 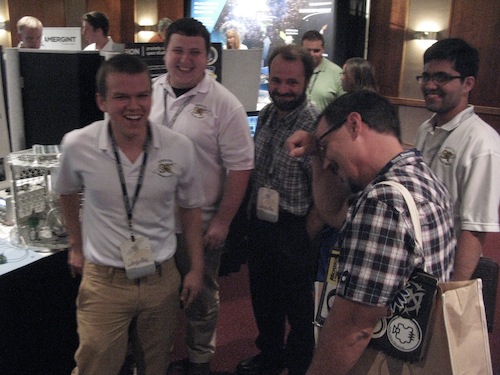 Since SparkFun was somewhat out of its element at this conference, we were curious if our company name would be recognized. In general, the more traditional companies hadn't heard of us. Many of the newer and smaller ones had. And a huge number of the students at the conference, many of them participating in the Air Force's University Nanosat Competition, knew us well and even showed off the red boards in their "flatsat" demonstration systems. A few people excitedly asked if SparkFun was building a satellite (we wish!) or getting into the space business. The quick answer to the second question is no. We've gotten pretty good at what we're doing now, and we probably wouldn't be as successful trying to do something as disciplined as flight hardware and software. But it's clear from what we saw at the conference that our products are ending up in satellites at least in the prototype stage, and even though we don't specifically design for it, rumor has it that a few of our products have made it all the way to space. Like you, we're going to be keeping a close eye on the continuing developments in this field, maybe play around with a ground station to talk to some of the spacecraft already up there, and who knows - someday, sooner than you think, there may be a little red box in orbit.