After our West Coast trip, the Department of Education rested up for a week and then headed out to Jefferson City, MO, to conduct a bunch of workshops and get some serious barbecue.

The West Coast tour last fall was amazing. We met a bunch of people, taught a whole lot and got to see some awesome projects. Hoping to be home in time for Halloween, we drove through the night and found ourselves cooking cinnamon rolls for breakfast while the RV chugged up over the Rocky Mountains (cooking in a moving vehicle is an art unto itself). After a little over a week of staying in one place we started to get itchy feet, so in early November we drove east to Jefferson City, MO, to see what a 4-H Robotics conference looks like. Along the way we stopped for some barbeque.

Sometimes we have trouble with unprepared laptops or computers when we teach workshops. It's difficult because often the awesome people installing software and drivers for us ahead of time don't actually have to teach the workshops. Usually everything goes well, but we have seen classes where we have a limited amount of time being brought to a screeching halt by a lack of drivers and admin password. The technical support for the conference, Bill Pabst, was having none of that. It really underlined for us the importance of having the whole educational community on board to support tech teachers. Without the support of administration and IT people, a tech teacher's life is a non-stop roller coaster ride of hoping nothing goes wrong in the future instead of reveling in present successes. 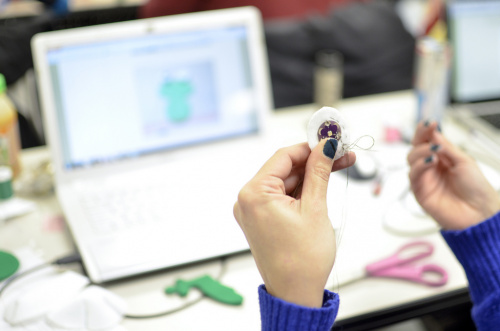 Learning Arduino with the LilyPad

Jeff and I split up into two teams to teach Intro to Arduino with two different hardware formats. He taught using the Simple LilyPad boards and I taught using ProtoSnap Mini. Then we joined forces to teach e-sewing and XBee Series 1 wireless. (Rob wasn't there, just giving props.) The population was a combination of teachers and students. People had travelled from far and wide to come to the conference, so we met people from Mississipi to Chicago and everywhere in between. My favorite moment was overhearing two sixteen-year-old girls exclaiming that "Sewing is hard! It's not easy like soldering... or programming." 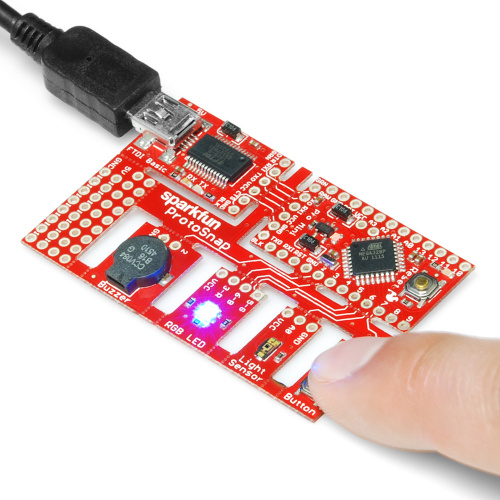 Fun with the ProtoSnap Mini

The guys from the Cowtown Computer Congress had a really easy time with XBee but also had similar sentiments about e-sewing. Among their group was Rob Giseburt, author of extruder head firmware for 3-D printers as well as other very interesting projects. They were really great guys and printed out little gliders for all us kids. It just goes to show that there are so many skills involved in tinkering and making that just when you think you've seen it all, a new skill comes along and you get to start the learning process all over again. I wound up hanging out with guys from Cowtown Computer Congress, among others, until the wee hours due to the presence of a piano in the hotel lounge. 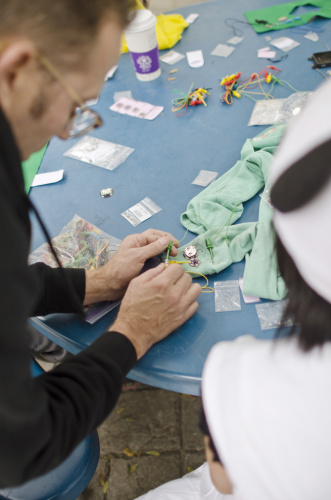 There was a wide array of educators at the conference. Everything from infrastructure and funding, to 3-D printing and diesel powered robotics was up for discussion. The keynotes were delivered by Ross Higashi from Carnegie Mellon's Robotics Academy and Arlene Lantz, a 4-H volunteer and amazingly active member in Missouri's educational community. Among other things, Ross is known for his work with ROBOLAB Video Trainer and Lego NXT. Arlene Lantz was the recipient of the Mylo Downey Leadership Award in recognition of her work in 18 different counties. Her activities include relentless organization and fundraising as well as being Club Leader and club shooting instructor for the Country Explorers organization. SparkFun would also like to thank Ann Boes, the organizer of the event. We know how much it takes to put together large events and we were proud to be able to support the people we met in Jefferson City.

With a twelve hour drive ahead of us at the end of the weekend, we packed up our trusty van and headed back west. Despite the fact that it was the first day of hunting season and our new friends had warned us to be vigil, we made it home to the square state without any incidents. I can't wait to head back to Missouri and Kansas to see what they've been up to in the meantime (and grab some more barbecue)!

Introduction to Infrared with Jeff