From an automated mushroom farm to the first NFT in space! Read on to find out what happened at the Jan '22 Miami Hack Week!

Part Un: What in the world is Miami Hack Week?

For the uninitiated, Miami Hack Week is a week-long distributed hackathon that happens all throughout beautiful Miami. Unlike a normal hackathon where everyone is situated in one location, this hackathon is spread out all over the city in houses – or mansions – that were rented out for the week.

This year, about 1000 hackers participated in the event, a majority of whom flew in just for the Hack Week. Most of the attendees were established engineers but there was a healthy mix of founders, product designers, and ambitious university students. 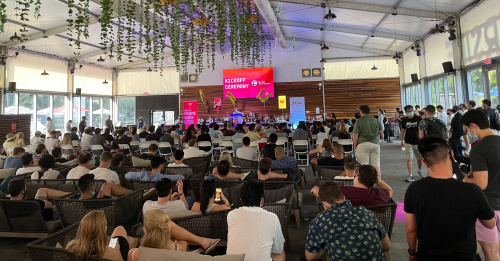 An essential part of Miami Hack Week is the theme of each house. Each house has its own theme that's determined by the sponsors of the house – someone’s gotta pay for those mansions! As you could probably guess, most of the houses had some sort of DeFi / Crypto / Web3 theme. But, surrounded by a thick brush of crypto mansions was the sleeping beast known as the Hard Tech house. That house is what I’ll be talking about today.

Realizing that all the other houses were crypto-related – and wanting to inspire more hard tech/deep tech engineers to move to my home city of Miami – I teamed up with Channing Pear from Hard Tech Miami to create an official Hard Tech house.

Now, unlike all the other houses that just needed to provide good internet and plenty of food, we also needed hardware! After all, if people are flying in for this event, they’re not going to be able to bring their 3D printers, power tools, and drawers of electronics with them. So we got to work sourcing everything they needed from my home maker space and those of local hackers. The icing on the cake was getting SparkFun and Hackster.io to sponsor our house, which allowed us to provide our teams with all the boards and components they could possibly need. With all that covered, we were ready for the hacking to begin!

Since this blog post would get too long if I described all the projects that came out of the house, I’ll highlight two of my favorites.

Led by Jacob Werbin and accompanied by Yekini Wallen-Bryan, Gavin Yuan, Patrick Davies, and Pablo Felgueres, with help from Joe Chin, project dSilo’s mission was to increase the efficiency of small to medium-scale mushroom growers for sustainable food production. They did this by creating a mockup of a 5 pod mushroom incubator that could be layered in 6-foot tall stacks. Each tower would have a single robot arm nestled in the center of the stacks. This robot arm could rotate within the stack to access each mushroom growing pod, as well as move vertically throughout the stacks thanks to a small opening in each layer. 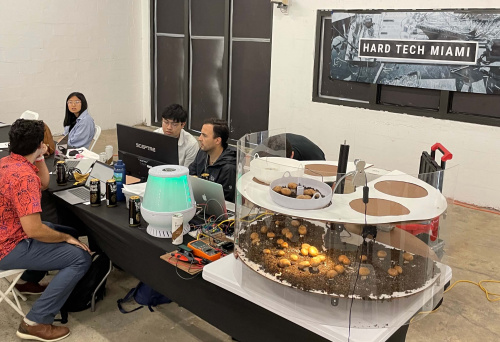 There were two magical innovations to this project. The first was the environmental control system. Using soil moisture sensors and environmental sensors – humidity, temperature, CO2, and VOC – as well as Peltier coolers, resistive heaters, and a humidifier, they were able to measure the environment within the incubator and intelligently manipulate the conditions inside. From there, they could collect data on the best parameters for any mushroom species throughout their varied growth cycles. This would allow for an open-sourced algorithmic “guide book” to successfully grow mushrooms.

The second innovation was the creation of a computer vision algorithm to detect mushrooms. Using OpenCV running on an Nvidia Jetson Nano, they were able to train the algorithm to detect white and brown mushrooms on a simulated mycelium field. From there they worked out the math to direct the robot arm to the center of each mushroom and proceed to grab it with sufficient force to pull it from it’s roots while being gentle enough to not mar the surface.

Cosmic NFT was led by Nick Tindle and his incredible teammates Ian Perez, Peyton Thibodeaux, and Ben Linville, with some help from Marylin Ma and yours truly. Their mission was to mint the first NFT in SPACE as a way of promoting Hard Tech Miami and providing some light social commentary on the abundance of crypto-related houses.

The plan was to attach an ESP32 camera board with an iridium satellite uplink to a 6-foot wide balloon filled with helium and let it fly up as high as it could. However, before they could order any parts, the team needed to settle one important question. Is this even legal?

After consulting a lawyer, reading FAA guidelines, and doing a bunch of math, they got their answer. Yes, it is legal, but they had to abide by the following rules: the payload of the balloon needed to be less than 4 pounds, the balloon could not be launched from within nor fly through FAA airspace or flight paths, and they should probably launch it somewhere away from wondering eyes.

With that, they ordered everything they needed for the project: 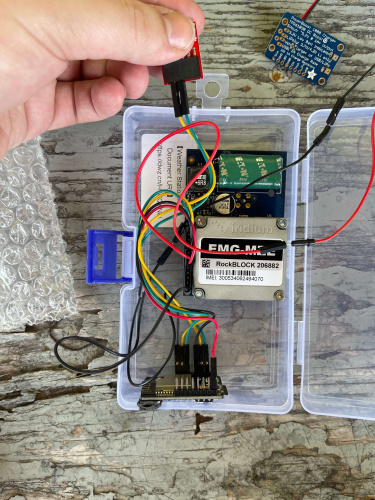 Altogether, they spent well over $1,000 on parts & supplies. But that’s not where they thought the bulk of the funds would go. Based on the documentation provided by Iridium, they estimated they would need to spend over $3,000 in data alone! Luckily, once they had the satellite uplink working, they realized each credit could fit more data than they had originally predicted. Nevertheless, with each credit costing about $0.12 and only allowing for 50KB of data, they still spent a few hundred dollars on data alone.

Now that everything was delivered and tested, they still needed to figure out one last thing. Where in the world are they going to launch it from?

Considering that their calculations told them the balloon would travel east towards the Bahamas, the only obvious answer was to launch it from the ocean. But there was one problem, they had already spent too much money and all four of the team members had flown into Miami specifically for this event, so they didn’t know anyone with a boat – this is where I came in. Having grown up in Miami, I called up a good friend of mine whose dad graciously agreed to take us 30 minutes out from shore to launch the balloon. Success!

With little to no sleep, Friday morning we picked up the tanks of helium and boarded the boat to the launch site. It was a windy day, but the skies were clear enough for launch. The tanks of helium weighed over 100 pounds and took several sleep-deprived guys to lift on and off of the boat. While handling the balloon, everyone had to wear latex gloves and not touch anything other than the balloon. This was because at sea level the balloon is 6 feet wide, but at it’s maximum altitude of 100,000 feet the lack of pressure causes the balloon to expand to 30 feet in width. So, if any finger oil or other contaminant got on the surface of the balloon, that oil would create a weak point, causing the balloon to prematurely pop at a much lower altitude.

After 5 days of tireless work and 10 minutes of filling the balloon, it was time for launch.

The second we all let go it flew out of our hands traveling about 5 meters per second! We all stood there in amazement as we watched our hard work – and lots of money – fly up and away towards the clouds, never to be seen again. It was a moment unlike any other.

As the balloon soared through the air, they confirmed that they were receiving packets, although the device did physically freeze at some point in its climb. Once it stopped sending packets, the team was able to combine all of the packets they had received into this final image and posted it on OpenSea. 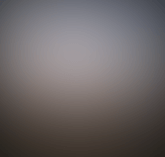 After the launch, the team sent the video above to Marylin, who represented the team at the expo table back on land. By the time the team got back to shore, they received word that the judges had seen the video, and better yet, they had made it to the top 5, causing them to rush over to the expo, making it there just 10 minutes before they had to go up on stage.

After much deliberation, the judges announced that the Cosmic NFT won 1st place at the hackathon. Beating out teams from over 30 houses with their pie in the sky idea that had taken flight barely 3 hours earlier. 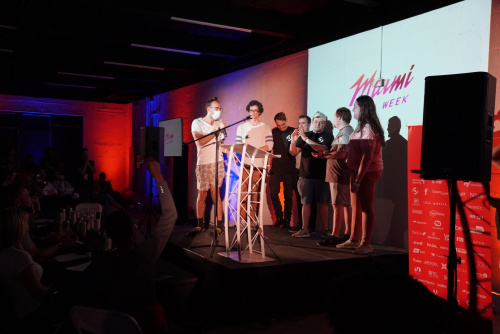 I’ve participated in many hackathons, but out of all of them, this project takes the cake for not only being the most ambitious, but for actually succeeding in their goal. Sure the image might not be the best, but what’s an NFT other than a series of bits tied to a blockchain? At least these bits came from space!

In the end, this hackathon was a major success for the Hard Tech house, which created 3 of the top 6 projects. It showed that even in a sea full of bits, atoms can still win.

A huge thanks to SparkFun, Hackster.io, and all the other sponsors that made this possible. Plus, special thanks to Hard Tech Miami for creating this amazing community of engineers and empowering them to do anything from the ground to the sky! 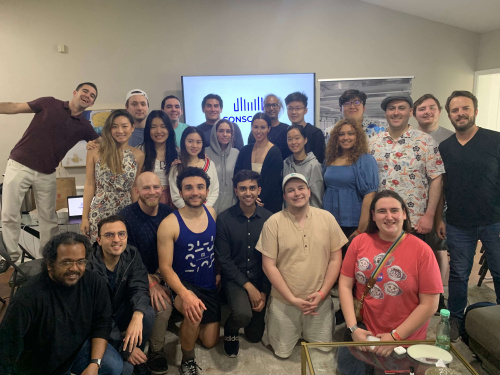 P.S. Did you catch the SparkFun sticker on the ballon’s payload as it took off? 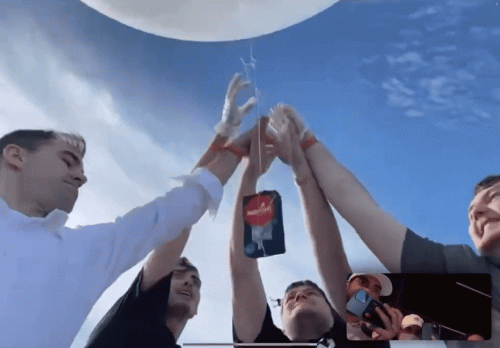 Atomic Clocks, GNSS, and You!