Aaron's untimely death hit home here at SparkFun and we'd like to help honor him.

First off, please be forewarned that the following post covers a “heavier” subject than you might be used to seeing here.

If you are at all even tangentially interested in this subject, you have probably already heard the news that on January 11th, 2013, Aaron Swartz (of RSS, Reddit, web.py and so much more) took his own life. 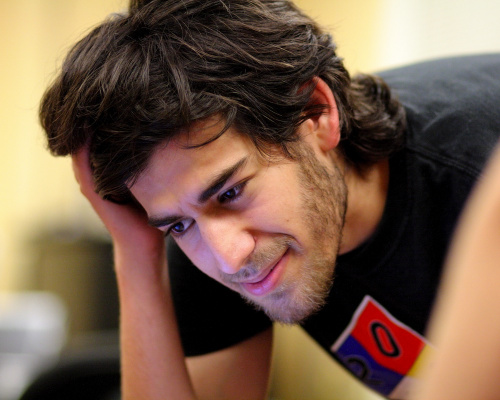 For well over a year, Aaron had been the subject of a long investigation (some called it a witch-hunt) by the federal authorities for his involvement in the scraping of JSTOR articles from an MIT computer lab.

In July 2011, Aaron was indicted by a federal grand jury for wire fraud, computer fraud, unlawfully obtaining information from a protected computer and recklessly damaging a protected computer. There is unending speculation about the validity of these charges, the appropriateness of the grand jury’s investigation, the reasons why the feds took such an interest in a seemingly innocuous act, and the reasons for Aaron taking his own life.

However, I have no interest in trying to hash out the feds’ reasons for prosecuting Aaron here, and I have formed my own opinions on the matter (I humbly suggest you do the same). I also don’t feel it appropriate to speculate on the motivations Aaron may have had for taking his own life. The purpose of this post is to hopefully help honor Aaron’s legacy. 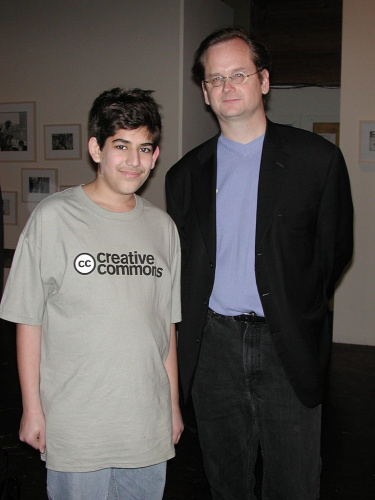 Aaron, at age 15, with Lawrence Lessig at the Creative Commons launch. <-

Aaron was only 26 when he ended his life, and any way you look at it, the brevity of this brilliant young man’s life is tragic. For us here at SparkFun, the news of Aaron’s death hit home. Aaron’s influence in the digital world is far-reaching and profound. As I type this, I am using John Gruber’s Markdown, a lightweight markup language he influenced considerably. Aaron was heavily involved in standards efforts like RSS 1.0 at the age of 14. He helped define Creative Commons, a licensing scheme we use for much of what we publish. His involvement in the early days of reddit is well-documented, and he was a major player in last year’s fight against SOPA.

Although Aaron’s actions relating to JSTOR weren’t legal, they also weren’t malicious. Aaron believed that information should be free, especially the potentially beneficial lab studies locked away in JSTOR’s proprietary system (including a large catalog that were publicly funded in the first place). Aaron didn't do it for fame or profit, but to share knowledge with others. We at SparkFun find that idea aligns closely with our own beliefs in open source. Furthermore, anyone who knew Aaron personally will speak about his kindness, openness, and willingness to help others. He was, by all accounts, a very good person. His unique type of innovative intelligence comes along very rarely, and to see his brilliant light snuffed out so quickly is very sad indeed.

The good news in all this is that Aaron’s influence and legacy remain intact. His contributions have led to great leaps in programming, development, and more. Recently, some friends of Aaron’s partner, Taren Stinebricker-Kaufmann, have put together a fund to help her through this difficult time. Today, we would like to encourage you to donate. This video is the footage of Taren's eulogy at Aaron's memorial. It's a worthy watch:

Please donate if you have the means. I would also feel remiss if I didn’t at least take this opportunity to say that if you are dealing with depression or having thoughts of suicide, remember there are always other options. The National Suicide Prevention Lifeline is a great resource. Thanks for reading.

According to Pete - Voltage Regulators