We lunch, we learn, we love awesome visitors.

Beyond the kegs, skateboards, food trucks and constant presence of dozens of friendly dogs, working for SparkFun has a lot of other perks. One of them is that we host, on average, several Lunch & Learns a week, where both internal and guest experts come and bestow their genius upon us while we eat free pizza. We've had talks that cover salsa dancing, Google Analytics, Android & serial mirror app hacks for the Simon kit, photography in Dubai, the architecture of interactive spaces, pretzel-making, and a notable recent session where our CFO Richard formally introduced his department (Human Finance) in an evening gown. We've hosted a number of esteemed guest speakers: retired NASA engineer Tom Graves, 2600 hacker and author of Exploding the Phone Phil Lapsley, CO School of Mines physics professor Jeff Squier, who built a femtosecond laser microscope out of a dvd player, and a couple weeks ago, we welcomed David Sengeh. David is a Sierra Leonean PhD student at MIT Labs, and president of non-profit organization Global Minimum. He spoke with us both about his work in biomechatronics for improved prosthetic limb design, as well as his project Innovate Salone and how it fosters creativity and problem-solving skills in young minds in developing countries and worldwide. 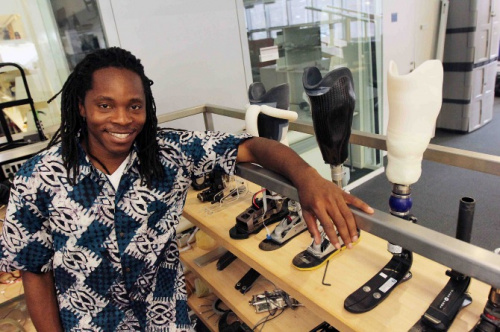 Innovate Salone is a youth mentorship program designed to encourage creativity and problem-solving in high school students in Sierra Leone. The program, modeled after MIT's innovation competitions and entering its second year, empowers young inventors to come up with DIY solutions to everyday issues facing their communities. Teams of students are given a starting allowance, choose a problem in their community, and work to prototype a solution with support from the program; issues addressed range from health, agriculture, chores, crafts and entertainment. A panel of judges reviews the prototypes, and the finalist teams then receive $500 to complete their project. Previous winners have included an electric broom, a collaboration to fabricate locally-made backpacks for students, and a homemade FM radio. In addition to the regular competition, Innovate also hosts a Summer Innovation Camp - a three-day event that brings together finalist teams so that they can share their inventions and develop critical thinking and collaboration skills.

We were excited to have David here - if there's one thing we can agree on, it's that inspiring essential future innovation and community problem solving starts with young minds. SparkFun's Department of Education sent backpacks full of SIK components with David when he returned to Sierra Leone last year, which he used to set up labs in two local high schools. The labs are now being run by two young innovators, including Kelvin Doe, a student and previous winner of Innovate Salone. While being mentored by David, Kelvin became the youngest person in history to be invited to the "Visiting Practitioner's Program" at MIT, and his story is the subject of a fantastic video, which went viral last fall with over 4 million views. A new video about Kelvin's return to the US to speak at TEDxTeen was released early this month.

After his presentation, David sat down with us and elaborated on a few of Innovate Salone's key goals and lasting effects.

Q: You spoke with us about the importance of fostering integrity among young makers, which is something you don't hear about much. Why is instilling integrity important, and how do you encourage young makers to incorporate integrity in their innovations?

A: I think one thing that's missing - which people in engineering and tech who think we can use young makers to transform a country often forget - is that you can give these opportunities and skill sets to people, but what's really important at the end of the day is how they use that for society. Somebody said that integrity is what you do when nobody else is watching, and that can be applied to what you do with the space and tools that are provided, and more importantly what you choose to do with the capabilities you have when people aren't watching. It doesn't matter what solution sets you provide; if it doesn't include this element of integrity and trust in doing something and caring for your community, I don't think there will be a lot of success. In the same way we provide sessions on making and deconstructing, we need sessions on integrity. You will not achieve community integrity unless there's also individual integrity; if an individual breaks the trust then you break the whole bubble. 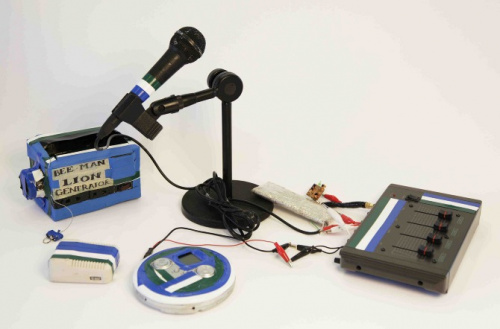 Some of the gadgets built by Kelvin Doe, one of Innovate Salone's 2012 winners (photo courtesy of David Sengeh and Paula Aguilera)

Q: After your inaugural year of Innovate Salone, have you noticed a ripple effect in the community after seeing the success of young, local innovators?

A: I think that's what I'm most proud of actually. Mohamed didn't participate [in Innovate], and because he submitted a project outside the program, his younger cousin has sent me a project. All the kids who did Innovate, their brothers want to participate now. With Kelvin's ideas and the impact he's had on his community - I think he's getting the Presidential Award in Sierra Leone this coming month - everybody suddenly thinks, "I can do something, I can be somebody through innovation." 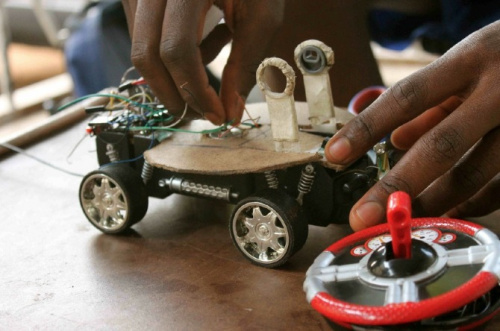 Mohamed Harding, who sought David out but didn't officially participate in the Innovate program, built this robot from scrap materials, and now helps Kelvin run the computer lab at one of the high schools that received SIKs from SparkFun (photo courtesy of David Sengeh and Kate Krontiris)

Q: Part of your focus with Innovate Salone is getting more girls involved in engineering. Why is it important to you to bring more girls from these communities into innovation, and why is it such a challenge?

A: Well, I think we need more engineers period, but clearly when you get more people from different backgrounds in a room, the way we solve the problems are very different. The experience of the girl growing up in Sierra Leone is very different from the experience of the boy, and I think having that diverse set of experiences in itself toward national problem solving is very essential. Sixty percent of Africa's population is going to be under 25 or 30 in the next couple years - a significant amount of those young people are girls. It's about equality and giving more women opportunities to participate. The eventual goal is to have a culture of innovation in the country, a culture of problem solving, and you can only really get there on a bigger level if women are a central piece.

There are now plans to institute Innovate programs in Kenya and Cape Town, and David is currently raising funds to build permanent workshop spaces in Sierra Leone that will provide young innovators with the tools and guidance to work on their projects. If you're interested in learning more or contributing to the Innovate program, check out their fundraising site! We really love meeting and learning from people who understand the challenges facing the future of innovation and are actively working to solve them; thanks much for coming to hang out at SparkFun David - we're honored to help Innovate however we can!

According to Pete - Spectra Symbol Contest and Workspace Tour!