Enginursday: All Aboard for The Final Frontier

Way back in August (man, we're busy around here!) "According to" Pete Dokter, Jeff Branson and I took a road trip from SparkFun HQ in Boulder, Colorado, to the lovely town of Logan, Utah, for the 27th annual AIAA Small Satellite Conference. 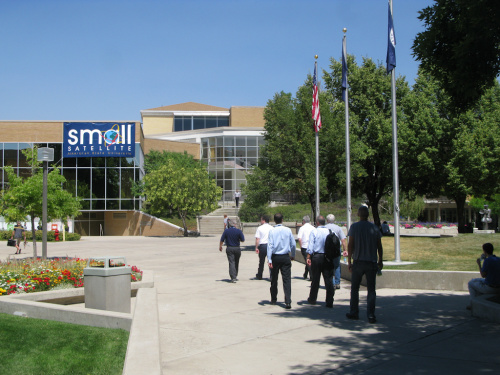 Why small satellites? Putting stuff into space is expensive, because the amount of energy (rocket fuel, and by extension, rocket) that it takes to lift something out of the atmosphere and accelerate it to orbital velocity is A) a lot, and B) directly proportional to the mass of the object that you're trying to launch. The smaller and lighter you can make your hardware, the less expensive the ride will be. In 1987, the founders of the Smallsat conference realized that the same revolution going on in the commercial electronics industry (faster, smaller, lower-cost, lower-power, and more reliable components) could lead to smaller, less expensive, and more capable spacecraft. That they were right is a huge understatement, and is one of the foundations of today's rapidly growing commercial space business. 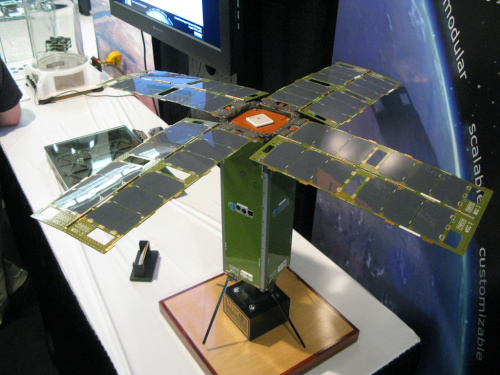 Another factor that makes this conference so interesting is the high level of student involvement. Back when the professionals were arguing over whether you could successfully use commercial-grade electronic components in space, students were going ahead and actually doing it, because their budgets didn't allow for anything else. The professionals took notice, and innovative student work has always been a major part of this conference. There is a yearly competition for the best student research project, and the collegiate design teams participating in the Air Force's University Nanosat Program (first prize: a ride to space) hold major progress reviews in front of distinguished industry judges. There's more drama here than you'd think. 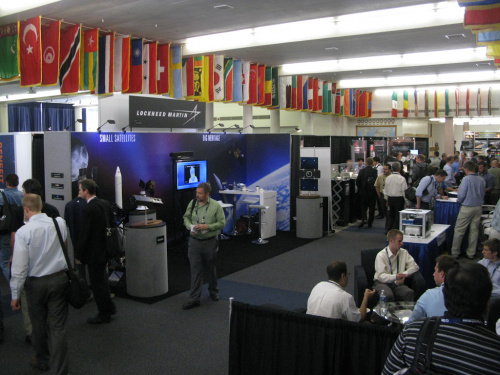 Pete and I had attended last year's conference to check things out (you can read our earlier report to get more background on the industry). The response to a couple of guys from SparkFun just walking around was enthusiastic enough that we planned on coming back next year with an actual booth. Unlike pretty much every other company there, we don't sell space-rated hardware (we joked that our hardware is actually rad-softened™). But a lot of our stuff is used by people in the prototyping stage, where the fact that our designs are open source is a big draw. We wanted to talk to the people who know us and use our stuff, as well as those who had never heard of us, to see what we could better do to support this community, and we got a lot of great feedback. We may see a Harduino yet. 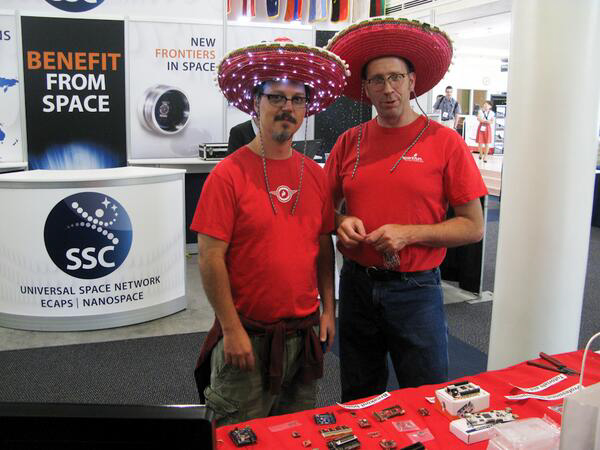 An important addition this year was Jeff Branson from SparkFun's education department. Jeff had already been talking to several groups about supporting space-related education programs (look for announcements soon), is a tireless evangelist for technical education of every type, and is one of the most competent makers we've ever seen. (Around SparkFun, a common answer to needing even the most esoteric tool is that "Jeff has one in his garage.") He was the right man for the job. 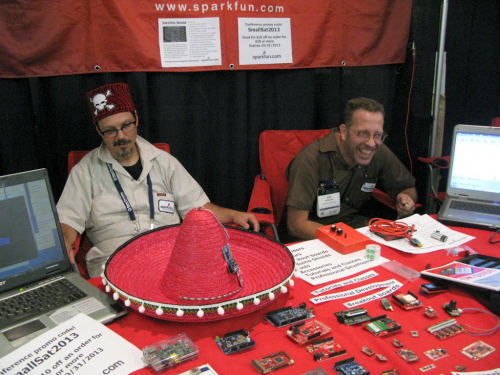 For our booth, Jeff wanted an entertaining way to show off some of our sensors, and as usual he thought well outside the red box. At first I was skeptical about his IMU (Inertial Measurement Unit)-enabled sombreros that wirelessly transmitted their orientation to a spinning block on a laptop (not to mention the speedsuits which were required for reasons I can't recall). But the conference attendees loved it and there was always a large crowd around SparkFun's small booth. Look for more ITAR-controlled headwear and speedsuits (possibly red ones?) in the future. 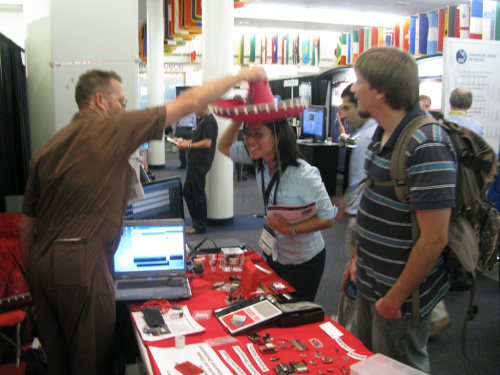 The theme of this year's conference was Strength in Numbers. This refers to satellite constellations - using multiple spacecraft to handle jobs too big or spread out for just one platform. By virtue of their size, small satellites lend themselves to being deployed en masse, and a number of the technical presentations covered innovative applications and clever techniques for operating distributed satellite networks. But the theme was also apropos to the fact that the number of small satellites on-orbit and in the pipeline is growing exponentially. These days it is more the rule than the exception that a launch vehicle will deploy a gaggle of Cubesats along with its primary payload.

While we're talking about putting more hardware into orbit, it's worth mentioning that among these professionals the proliferation of space junk is a significant concern (it is after all their playground). The LEO (Low Earth Orbit) environment tends to be self-cleaning. The combination of relatively low orbits and low mass means that most small satellite missions have short lifetimes of three months to a few years. But even so, the community is working on designs for pop-out drag sails and more exciting techniques to bring down satellites quickly when their missions are over, and there are even proposals to use small satellites to clean up other space junk. These folks are keeping the playground clean. 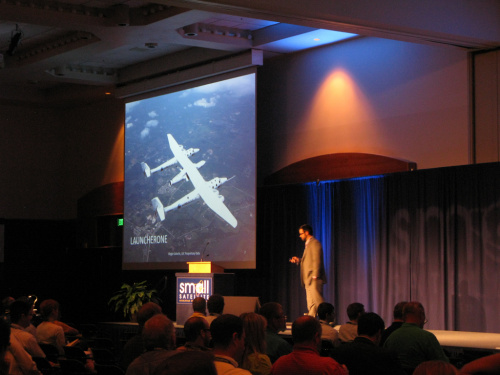 Another theme we saw running through the conference was that commodity hardware and services are starting to have the same benefit in space that we see in more down-to-earth markets. As Ted Stern and Nick Walmsley of Vanguard Space Technologies succinctly put it, "Low volumes don't let you come down the expense or learning curves." The feedback from an increasing number of spacecraft using the same hardware is allowing manufacturers to improve and mature their designs, something we do at SparkFun every day. This concept extends to flight opportunities. Will Pomerantz of Virgin Galactic notes that because large rocket launches are sporadic and unpredictable, "it is hard to build a business case around secondary launch opportunities." His company and others are working towards offering smaller rocket systems making regularly scheduled flights to orbit. This is straight out of science fiction, although he notes that to get there "we don't need Star Trek technology; we just need to do things in bite-sized chunks." 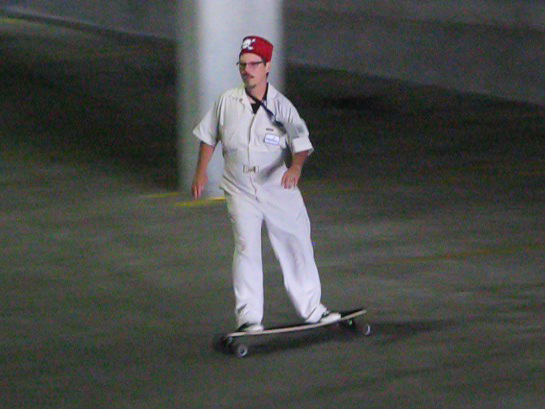 Throw in a bit of after-hours longboarding (Utah State University, which hosts the conference, is perched on a picturesque and quite carvable hill), and we ended a successful first "official" presence at this conference. For people whose passion involves space, this community is very down-to-earth. Thank you to everyone who stopped by to say hi, and especially those of you brave enough to try on the silly hats. As they did last year, a number of people asked if SparkFun was getting into the flight hardware market, and as we did last year, we said that we're pretty good at what we're doing now, and probably wouldn't be as successful doing something as disciplined as flight hardware (not to mention trying to keep dogs out of the cleanrooms). But we did get a lot of great suggestions for new product areas that we'll be bringing to you soon, some as early as later this month. We're also collaborating with several groups working on incredible educational spaceflight opportunities that we're very excited about. Space is still an expensive hobby, but stay tuned and get ready: the final frontier is open for business.