Weather Ballooning in the White Mountains

David Stillman from IT launched a weather balloon in New Hampshire on the National Tour! Read all about it.

I just returned from three weeks on the road, the latter two of which I was helping out on the Northeast leg of the SparkFun National Tour! On tour I lived with Jeff and Dav out of the awesome 29-foot RV and taught workshops in a handful of states to a bunch of different folks ranging from librarians to Yale. We had a day off in a rural part of New Hampshire, and we thought it might be a good idea to launch and track a weather balloon!

I'm no stranger to high altitude projects, and recently even sent a SparkFun box up to 130,000 feet, so I thought it would make a great project on our rest day. Nice and easy. We had done a workshop with a nice guy named Bill Church, and he and some high school students he works with are interested in putting a launch of their own together. What a perfect way to get some folks involved and interested!

Needless to say, putting a big project like this together at the last minute is nerve-wracking and probably not a good idea. But bad ideas have never stopped me before, and Jeff was super keen on getting a balloon in the air. Why not?

Long story short, we ran some predictions the day of and found that the payload would have gone straight into the Atlantic, so we fashioned a cut-down device on the morning of the launch. I don't want to ruin the full story, but I'll just say that the payload was tough to track in the mountains and the recovery location was interesting.

But the mountains and the changing of the leaves made a fantastic chase!

And we got some great views of the lovely town of Bethlehem, New Hampshire. 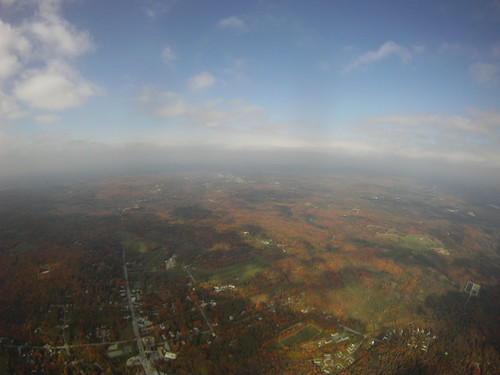 View from Above Bethlehem, NH<-

Read the full story, complete with all the pretty pictures, over on my personal site.