SparkFun Box in (Near) SPAAAAACE!

Dave and Mike launch a red SparkFun box on a weather balloon to the edge of the atmosphere.

I got an email from David Patterson of EDGE Research Lab as a launch notice explaining their plan to launch the radio module from the ArduSat project (which we backed on Kickstarter!) on a high altitude balloon for testing. He asked if I or anyone else from SparkFun would like to attend, as they were launching from the nearby town of Monument, CO. I said, "Well, sure!". Then I remembered I had a payload developed for the Champlain Mini Maker Faire in Vermont that had yet to fly, so I asked him if we could do a tandem launch. He agreed!

I was excited because I'm testing a radio system for a future zero pressure flight, plus I love launching balloons! By the time the details were sorted, I had just a few days to put together the payload, which was okay as the electronics were already done. All I needed was to find a container that could withstand the extreme conditions of flying to the edge of space. On the trip to over a hundred thousand feet, it's not uncommon to experience wind speeds of over 100 mph, cold down to -50°C and colder, to say nothing of free falling hundreds of miles an hour during the descent. I needed something robust, strong, and easily identifiable for when we were trying to find it again.

So, naturally, I got a red SparkFun box.

I threw a GoPro camera on a carbon fiber rod from the coolest kite store around, and was good to go.

I dragged SparkFun engineer Mike along with me and invited Toni from TS to watch the launch. We gathered at the launch site way, way too early on a Saturday morning where the temperature was still well below freezing. Of course the EDGE guys were already setting up. We unloaded our payload and started setting everything out in preparation. This was my first ever tandem launch, I'd only ever launched one balloon at a time before so I was quite excited! The EDGE team was well on their way to filling their 1600g Hwoyee envelope with the lighter-than-air hydrogen gas by the time we were ready to start. Their payload was significantly heavier, so they filled the balloon to have over 12 pounds of lift at the neck. As our payload was just one box with little else to weigh it down, we only inflated ours to have about 5.5 pounds of lift. We did the final flight checks, double-checked that we were receiving telemetry on both radio downlinks (and the auxiliary backup system) and called the local air traffic controller for clearance. When everything checked out and we were all ready, we set up for the release. It was exciting having two balloons to keep track of, and we lucked out on having a super calm day with little or no wind. 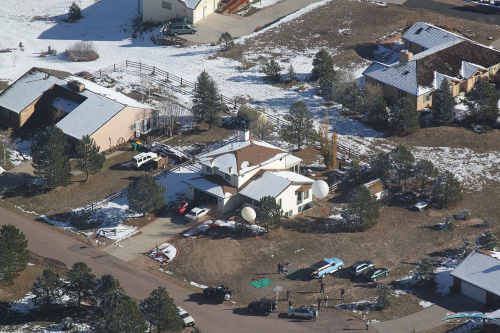 Oh, I forgot to mention. The guys at the EDGE Research lab have an airplane they use for tracking and recovery, which is where the picture above came from. Just because it's so flippin' rad, here's a picture of our balloon as it's rising with Pike's Peak there in the background, as taken from the airplane. 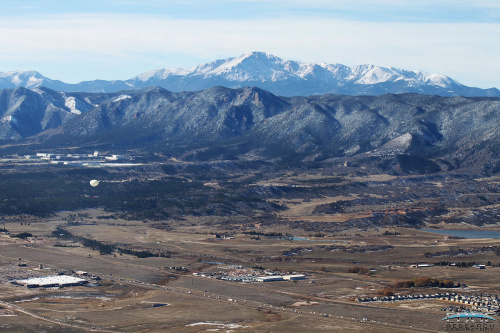 You might be just able to make out the red box in the big version :)<-

At this point, we parted ways with the EDGE folks to go track and recover our separate payloads. Since our payload weights varied so much, the flight paths were quite different, as seen on this Google Earth plot of both flight paths. 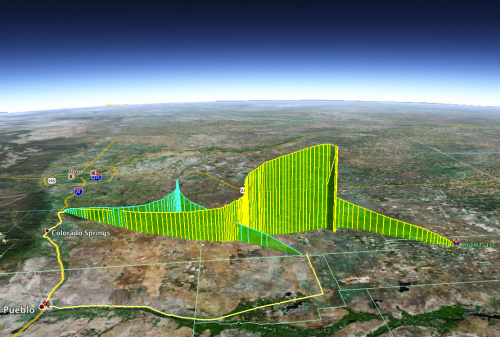 Ours is in yellow, theirs in green<-

Mike and I hit the road to go track down the payload in real time. We wound up driving several hundred miles that day, and tracked the payload all the way to Eads, Colorado, population 747. The payload landed in the middle of a field about a mile from the nearest road, so we were in it for the long haul. We grabbed a bit of food and water and set out, yagi antenna in hand, to find this thing and get the photos off the memory card. 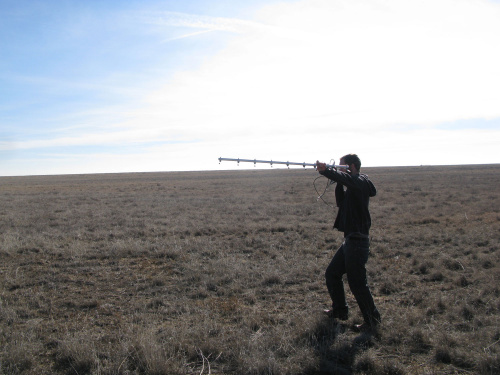 We finally found it, as predicted, in the middle of the field after hiking over a mile. Amazing what modern technology can do. 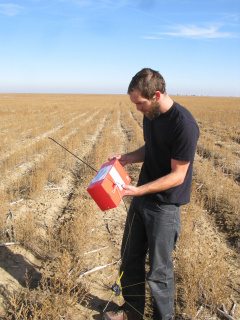 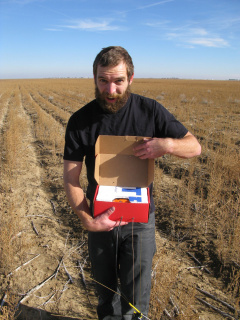 I was pretty excited to see it again<-

First thing we did was huff it back to the car and throw the memory card into the computer to see what we came up with. Everything worked flawlessly! I'll leave you with a few photos of the launch from the payloads point of view, there are a handful more on my flickr account. Over Monument, CO with Pike's Peak in the background<- So that's my story of how we got a red SparkFun box up to the edge of the atmosphere. And 2,000 feet higher than Felix Baumgartner did a few weeks ago ;)

My deepest thanks go to David Patterson and the EDGE Research Lab, without whom this project would not have gotten off the ground. I'm excited to see what they come up with next. They have a terrific video of the events as well, plus a full write-up in the works on the story from their side of things.