Q&A with Aaron Horowitz of Sproutel

We were lucky enough to have Aaron come to SparkFun to talk about his projects for kids!

A few weeks ago we were lucky to host Aaron Horowitz at SparkFun headquarters for a Lunch & Learn about his inspiring project Jerry the Bear, as well as his company Sproutel, which will create and offer interactive games to help children with chronic illnesses manage their own care. Aaron is a ridiculously happy and nice guy, and was accommodating enough to answer some of our questions! 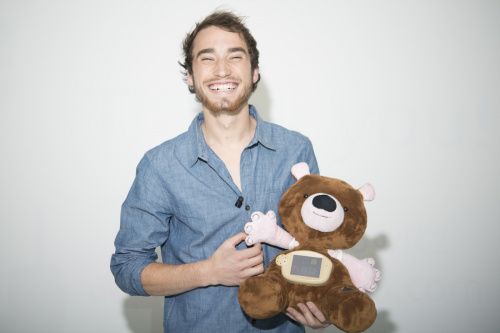 Tell us a little bit about yourself. Where are you from; what is your background; what's your favorite type of sandwich?

I spent my formative years in New York (think cows and horses) and currently reside in Providence, RI. While going to college at Northwestern University, I was lucky enough to create my own major called Mechatronics and User Interaction Design, which was an absolute blast!

Now as for sandwiches, I have a distinct taste due to a gluten allergy, so I’d have to say an “unwich.” This entails replacing bread with BACON!

How did you get your start in electronics? Did you take apart your parents' TV when you were a toddler, or was it a later-in-life sort of endeavor?

I’ve always had a curiosity and fascination with electronics. As a kid, this involved taking apart everything in sight, though I was never able to put them back together again. In fact, I distinctly remember taking apart a disposable camera and shocking myself as I held onto the massive capacitor that stored charge for the flash - and having absolutely no clue why it was happening.

I really dove into learning electronics through Jerry the Bear. When I started working on the project in my junior year of college, I was pretty much at square one. By working on Jerry, I slowly gained more and more knowledge and began to develop a passion for electronics. Having a project to work on assigned a purpose to learning and I grew an insatiable appetite to hack. This ultimately caused me to design my own major and graduate early to start a company to make Jerry a reality.

Tell us about Jerry the Bear: What was your inspiration for this creation? What are your goals for Jerry?

Jerry is a robotic teddy bear for children diagnosed with type 1 diabetes. He helps kids master their medical procedures through play - from monitoring blood glucose levels to maintaining a healthy diet. What keeps children engaged is a game in which kids train Jerry for the Olympics, all while keeping his glucose level in check.

My initial passion for the project came from my childhood diagnosis with human growth hormone deficiency, resulting in daily injections for about five years. Since this certainly wasn’t fun, it gave me a huge amount of empathy for children with type 1 diabetes and a desire to improve the lives of all children with a chronic illness. This spark is kept alive by children like Kayla, who overcame her fear of insulin injections after playing with Jerry for three days!

Jerry’s ultimate goal is to improve medical outcomes for children living with type 1 diabetes. We aim to reduce healthcare costs by helping children to better articulate their symptoms and learn how to manage their disease from an early age. In order to achieve this, we formed a company called Sproutel, which aims to bring similar products to children with autism, asthma and beyond.

Did any of SparkFun's resources play a role in your electronics endeavors?

SparkFun was immensely helpful, both as a teacher and a hardware store. Our first prototypes were built off of an Arduino Mega, Nokia 5110 screen, and an ad5330 for playing sound. We used tutorials to get the sound playing with the ad5330, display images on the Nokia screen, and make everything power-friendly enough to actually test with kids. When it came time to make custom boards, our circuits were designed by copying and pasting the Eagle files on the product page and laying everything out in the form factor that we needed. Since these were the first boards I had ever designed, this was a huge leg up - demystifying an otherwise daunting task for someone starting out.

What would you tell someone just getting started out in the world of DIY electronics?

Dive in with both feet and don’t be afraid! Hardware can seem really intimidating at first, but it is so incredibly rewarding to see lines of code transformed into actions in the physical world. For me, SparkFun, the Arduino forums, and Google were my mentors and best friends.

What is the one tool you can't do without?

I absolutely love single-edge razor blades. I grew up with parents who are artists, so we had more razor blades than scissors lying around the house. I guess I just grew accustomed to using them for cutting just about anything - from wood to PCBs.

Anything else we should know about you, your work, your projects, or life in general?

YES! I’ll be hosting a hardware hack-a-thon called Hack That on November 16th and 17th in Providence RI. If you’re a maker in the surrounding areas, check out the website for more info. Attendance is free and we’ve got some great prizes lined up!

Thank you Aaron, and keep up the amazing work!

According to Pete: Transistor Biasing Configurations