The necessary dangers of electricity, and whether they're worth it.

The first Maker I ever met was named Lou.

Well, not quite right. The VERY first maker I ever met was named Mom, and after her came some kid who Made really good snot bubbles, and after THAT the kid who learned how to Make origami out of gum wrappers, etc, etc. I suppose I’ve known a lot of Makers in my time.

But the first person I ever met who really understood that he was a Maker was definitely Lou. He was the first person I’d met who treated electronics without the formality or resignation of a career. It wasn’t a boss whose rules he had to follow. It was a friend, and AFTER work he’d sit down with a beer and his old pal Electronics to unwind. To de-stress by experiencing new stressors of his own making, challenges and conundrums to be sorted and debugged in code and hardware. 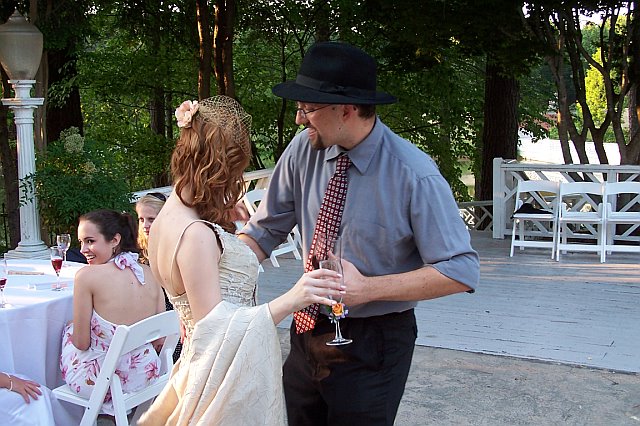 Lou dancing at my wedding

When I mentioned that I really wanted to replicate the glowing spine found on cylons in the series “BattleStar Galactica” for a Atlanta Sci-fi convention, Lou didn’t hesitate. He reassured me that it was possible, and that if I could find a way to make it a prosthetic, he could create the light effect. 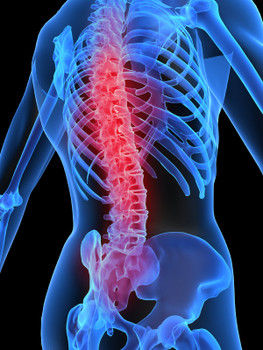 I didn't want to offend anyone with a bare cylon back, so instead I got you this back pain ad!

I’ll fast-forward for you through months of prototypes, one of Lou’s first PCB designs, and several aborted attempts at a prosthetic spine on my end. About a month before the conference, Lou had a [functioning prototype](Prototype video), and I had a messy kitchen and a couple of quarts of liquid latex down the drain (figuratively- kids, don’t pour liquid latex down your drains!)

I checked out the shaky demo video, delighted, and I didn’t stress at all about my failures to produce my side of the product, because from my perspective, I had the easy part. Just arts ‘n crafts!

Come the date, I remained unconcerned that the idea of a false layer of skin to hide the electronics inside of just wasn’t working out. I flew out to Atlanta with a semi-sheer shirt and a plan; I explained that I had it all worked out- we would glue the boards directly to my skin with latex, throw the shirt over them, and it would be showtime!

Lou didn’t love my plan. He explained about short circuits. He explained that while 9V wasn’t sticking your finger in the socket, it wasn’t exactly skin-safe. He told me about solder joints (they’re pointy!) and about sweat (it’s conductive!), and he tried, really hard, to tell me about electricity.

I’d get you some signed references from my parents, my teachers, and my husband if I thought for a second you guys would have trouble believing that I’m a little hard to persuade once I’ve got the bit between my teeth. Feel free to ask Pete next time you run into him at a Maker Faire. Lou never stood a chance.

There’s a lot of detail I could go into, and I could explain the specifics if I thought it was more enlightening than cringe-worthy, but I don’t, really. I wore the costume for 8 hours, turned a TON of heads, gratified us both immensely, and noticed a persistent smell of BBQ without really giving it much thought. It was about two in the morning before I discovered a knuckle-deep third-degree burn on my back. It happened so gradually that I didn't feel more than a tingling and pinching sensation that I attributed to a pokey solder joint.

If you want a full rundown, Lou recorded one here, way back when this happened, while the information was still fresh. He’s cool like that. I don’t have any records outside of my doctor’s notes, and he was laughing too hard to really give me anything but a tetanus shot.

I suppose the official lesson here is that electricity, even in small amounts, is dangerous, and that any dangerous thing is made more so by user ignorance. By refusing to even try to understand what the dangers were, and how I could mitigate them, and by choosing to plow ahead against the advice of the better-informed, I endangered myself for no good reason. I was told in advance what it would take to make the apparatus safe, and when I didn’t manage it, I decided to proceed with no safeguards at all in place. Respect for your tools (bandsaws and power supplies alike) is critical to safe and effective making, and a lack of it can lead to far more trouble than the small electrical burn on my back.

But the unofficial lesson is a little less clear. I don’t know if there’s a single best-practice that I followed. I didn’t make an effort to be safe or smart, but I had a lot of fun, enjoyed the fruits of a successful project, and discovered a new passion. A few months later, Lou sent me a link to Sparkfun, and told me about Free Day. I discovered conductive thread, and called Lou with more questions than I could get off of my tongue all at once. A floodgate had opened. 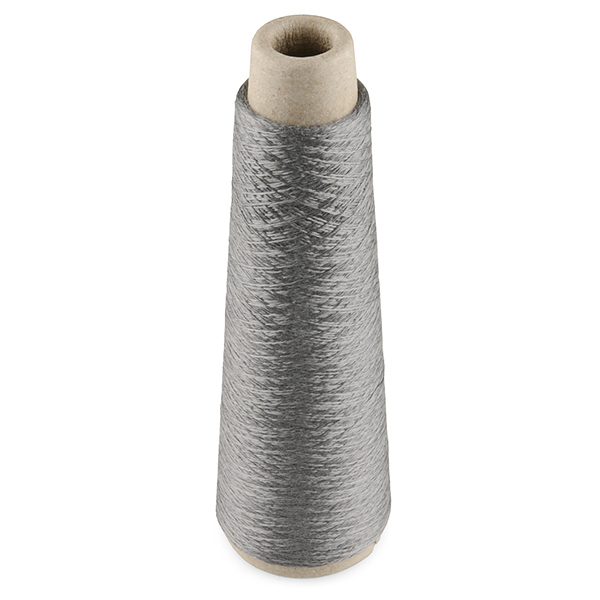 Lou and I have both come a long way since then, and we've both got a long way to go. He's a founding member of Hackyard Athens now, so he's spreading electronics education like a weed! I teach thousands of people a year their first e-textiles circuit, and I talk to them a lot about how to do it safely.

But neither of us can be sure that everyone is going to listen to our directions, read our tutorials, or heed our advice. And if we lived in a perfect world, and we could, I still wouldn’t tell anyone that it’s a perfectly safe hobby. Because electricity IS dangerous. If enough current is moving to turn your light on, play your music, or turn your servo, enough current is moving to create sparks, burns, or smoke. By teaching and using e-textiles, I haven’t discarded the danger of the soldering iron. I’ve traded that and the stiffness of wires for the very different danger of an un-insulated conduit. I WANT people to feel, and to be, safe when they’re learning about electronics. We all do. Nobody likes to see anyone get hurt, for the most part. But you can’t divorce the excitement, the power, or the purpose of electronics from the danger. Our best defense against potential injury is education, but by necessity we all start from a position of ignorance. In the end, all we can do is offer all the help we can, all of the information we have, and the good advice that fell on our deaf ears the first time around. We try to keep safe, but we hope that if, and when, we DO get burned, the education was worth it.

It was for me.