I met Reagan at Maker Faire New York, and I ask him some questions about his recent project: an animatronic Jackal helmet from Stargate.

We met Reagan at Maker Faire New York this past year, and he told us about the costume he was working on for Halloween: an animatronic Horus Guard helmet from Stargate. Reagan is 13 and continues to teach himself all he can to make cool projects, like the helmet! He agreed to answer a few questions that will hopefully be an inspiration to anyone just starting out. 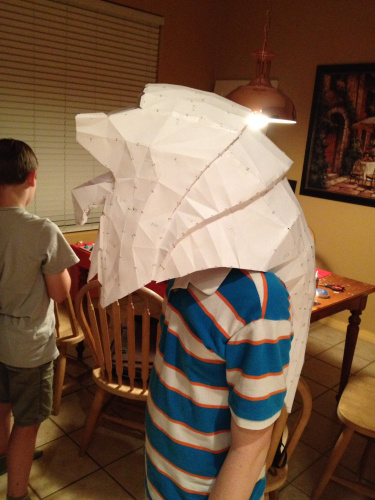 1. Can you tell us a little about yourself? When did you get interested in making?
Hi! I'm Reagan! About a year ago I got inspired by a kid on the cover of our local magazine who built a marshmallow cannon and shot it in the White House. A few months later, I met him at the Mesa Maker Fest. His name is Joey Hudy. After our meeting he introduced me to Arduino and taught me and my brothers how to solder at his house. His mother, Julie Hudy, was a big supporter of our projects and ideas and encouraged us to go to the Bay Area Maker Faire, where I got my first Arduino! And later to participate in Maker Camp, which is a online camp held in the summer. 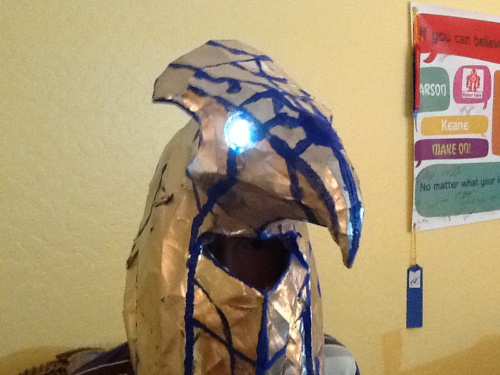 3. How did you make it? What materials did you use, and how did you do the circuitry?
In the Instructable, I found a site that uses supplies you have around the house... a printer, cardstock, and glue. Pepakura is a free program in which you can convert a 3D model into a print file that you can print, cut, fold, and glue into the model you made. After I made the base of the helmet from the Pepakura file, I paper mached it and then painted it to match my design. 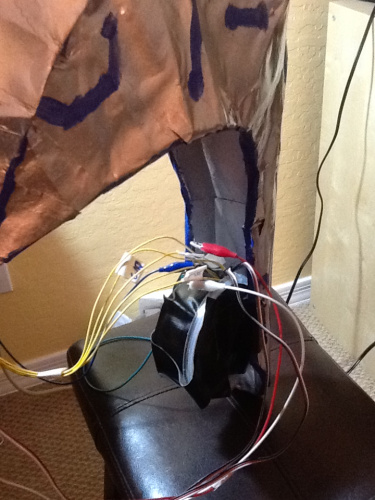 Microcontroller on the backside of the helmet

4. What was the most challenging part of making the helmet?
After that came the hardest part: the animatronics! The animatronics on the instructable was a bit pricey and I knew I could make it for less! So I used some balsa wood I had around the house to make the support for the servos. Then I put an arm on one of the servos to attach the head to the mechanism. I spray painted my Nerf gun silver. For the last part I put a joystick on the Nerf gun prop so I could control the head. 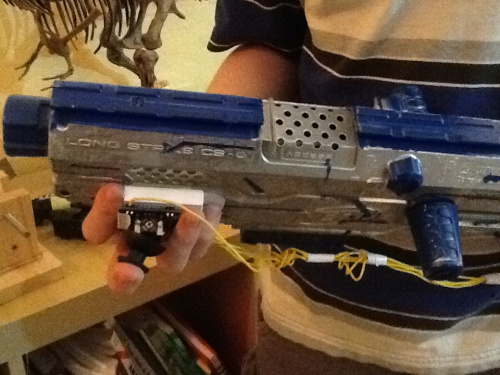 Joystick mounted on a Nerf gun to control the helmet

5. How did people react when they saw you in full costume during Halloween?
All of them were amazed and loved it! Many people were surprised when they saw the head move and asked, "How did you make that?" I told them about electronics and Make: and they definitely wanted to look into it!

6. Did you write any code for the helmet? If so, how did you learn to code (for example: did you read a book or have a mentor)?
I did write the code for the helmet with a lot of help from Erin RobotGrrl who also taught me how to code! I also read Jeremy Blum's book Exploring Arduino to get me started on coding.

7. How did you learn about electronics?
I learned about electronics at the Mesa Maker Fest when I met Joey and Julie Hudy, but I had been playing with Snap Circuits and Lego Mindstorms for a long time. I was actually involved in FLL and Google X Prize for 3 years. Last year I did the Future City competition where our team placed 4th in the state!

8. What other cool projects are you working on?
I'm working on 3 project at the moment:

9. If a friend asked for advice on how to get started with electronics, what would you tell them?
First, I would tell them to get an Arduino! They are sooooooo easy to use and you can do a ton of things with it! To get started using an Arduino, a little background in programming and electronics might come in handy...that's where Snap Circuits and the Digital Sandbox comes in. Those are both great jump off points! I would also tell them to persevere on a project! It's a lot better knowing that you tried your hardest on a project than giving up too soon.

Enginursday: Developers and Getting Started with Programming