Our final champion of geekery is in the house!

Once upon a time we ran an experimental Hacker-in-Residence program. We met a lot of our awesome genius customers, who joined us needing some sponsorship and technical backup to turn their ideas into reality. We launched the program without having the details and structure ironed out, and never managed to quite get the process or follow-up right, so we put it on hold while we reconsider how to run the program and better offer our support to the hacker community we know and love. Before the program was suspended, one brave hacker made it under the wire, and he's finally arrived! So here is (for now) our last hacker standing. Behold: Jesse Harding. 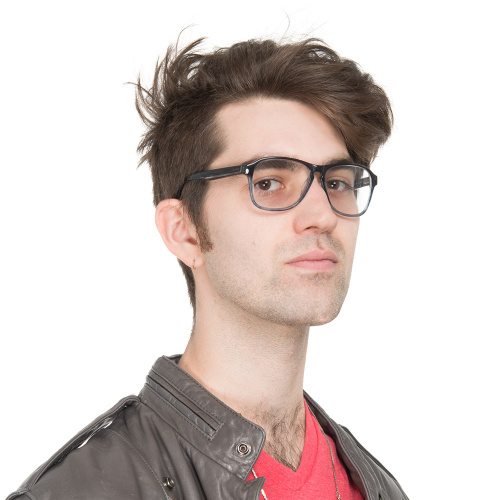 Who is Jesse Harding?

I think two of my favorite past projects are called "Moiré Pattern Generator" and "Phi." Moiré Pattern Generator is made from two pieces of Window Perf vinyl adhered onto plexiglas (one piece is static, the other rotates). This vinyl is the stuff that ads on bus windows are printed on, or American flag/eagle motifs on the rear window of pickup trucks. It's full of holes arranged in a hexagonal grid, and when these patterns are overlaid and rotated, there is a zoom-like effect.

Phi is based on the experience of beat frequency when tuning a musical instrument. When two notes are slightly out of tune, you can hear the interference between these two frequencies as they go in and out of phase. One day I thought, if this happens with sound, it could happen with color mixture too. This piece has a screen and three knobs that control the frequencies at which red, green, and blue LEDs blink (3 channels). These frequencies are also output as audio. When the user selects frequencies that are near each other, the color mixture will undulate between different states and can cause geometric hallucinations as well as the simultaneous experience of multiple solid fields of color (it can appear to be purple light and yellow light at the same time, since your photoreceptors don't all fire in unison, the mixture of the colors happens with cellular granularity).

Because Phi operates at high frequencies and depends on these frequencies' phases, it isn't really possible to capture on video, which is both a bummer and totally awesome, I think.

I currently work as a shop technician at The New School in NYC.

How and why did you get involved in SparkFun's Hacker-in-Residence program?

I love the DIY movement and therefore also love SparkFun. Any organization that works to move the power of creativity into the hands of the people is one with which I would like to be involved.

So often space and financial concerns stand in the way of artists working in the nebulous realm of "New Media." If it weren't for programs like these, there would be so many cool projects that never get made, instead being resigned to moulder only in the minds that originally thought of them.

What is the project you'll be working on at SparkFun?

I will be working on a project tentatively called "Orbital Harmonic Phase Scanner." It will create something similar to slit-scan photography, but unmediated and in real life. Horizontal laser scan lines will illuminate an object which is moving orbitally. The frequency that the lasers scan the object will be a subharmonic of the frequency at which the object moves, so the object will appear to distort as if it is being sucked down a drain (think about when people are sucked into the Jumanji board game).

This piece is based on another project I did previously called "Parallax Phase," which utilized a video camera attached to a speaker vibrating at a frequency that interfered with the frame rate of the video. NTSC scan lines were alternating compressed or stretched, which created a waving motion in the resultant video. While at a previous residency in Del Mar, California, at a gallery called "A Ship in the Woods," I realized that this same effect could be acheived without mediation through lighting, and I knew that I just had to do it.

If money/time/the laws of physics were of no object, what would your dream project be?

There are several projects that I have been wanting to make, but haven't been able to due to financial or physics constraints.

I've been wanting to make a massive installation using backlit lenticular hologram animations used to create a hallway which will appear to expand or contract space as you move through it, but that would cost upwards of $20k (mainly for printing).

I would also love to make a huge, room-sized version of Phi, which would possibly use neon lights instead of LEDs, but once again, PRICY!

I have also been itching to work with a neuroscientist on some manner of project utilizing TMS (transcranial magnetic stimulation) which is used to disrupt normal brain activity. Specifically, I want to undergo TMS to disrupt my visual pathways and induce various agnosias (making myself unable to perceive motion, or horizontal lines, or faces, etc.) and then create work either based on this process or designed to be viewed by individuals who either have such agnosias or have undergone similar TMS. Most people tell me that I'm crazy for wanting to do this, maybe they're right, but I still am super interested in understanding these alternative/diminished modes of perception.

I would also love to get myself near a black hole to try to do something with red-shifted or blue-shifted light that is orbiting before it is sucked into the singularity. I couldn't tell you exactly what I would do there, but that's just because I can't wrap my feeble mind around the crazy physics going on.