Examining the inner workings of an electric chord organ.

Many moons ago, I came across a Magnus Electric Chord Organ at a garage sale. I figured even if I couldn't ~~play it~~ ~~annoy my neighbors with it~~ hack the electronics, it could be gutted and used as a project enclosure. With festival season quickly approaching, it seems the time has come to begin brainstorming its second life. 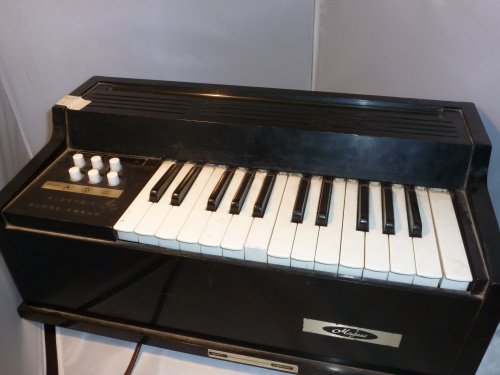 The model 300 from Magnus Harmonica Corporation

The bottom is stamped with the following label, claiming it is a Magnus Organ Corporation Model 300, with ratings that appear to be 120V, 50 CYC A.C., 42 Watts, 0.375 Amps. A quick interwebs search however did not lead to much in the way of a datasheet.

With an electronic keyboard-like appearance, I assumed that the inner workings of this instrument would be filled with electronic wonder. Turns out I was very, very wrong (let this be a lesson about how reading the manual beforehand can save you disappointment). The fan on the unit worked when switched on, but alas, I was unable to generate any sound from any of the keys.

The first thing I discovered after opening it up was the sheer amount of dust collected internally, thanks to the bottom fan. For anyone who has ever cleaned a computer tower, this won't come as a surprise. 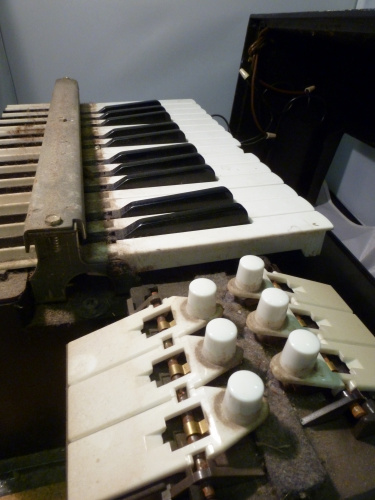 My surprise really hit a head when I removed the secondary cover (the structure supporting the keys), and found that the inside was empty. The only electronic part visible is the fan at the base. 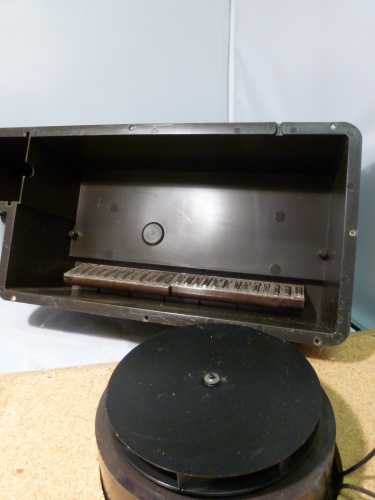 The only electric part, the motor, and the inside of the secondary case.

Thanks to Liz from tech support (they are always there to answer your questions!), I learned that the plastic bits are the reeds, which give each key its tuning. As each key is played, this opens a path for the air to flow, vibrating against the reed, and creating a note. 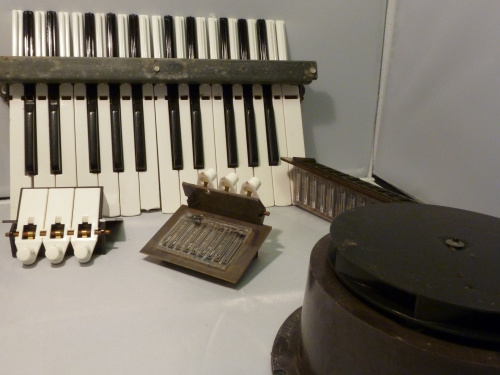 Here you can see many of the plastic reeds that create the different notes.

With a good cleaning of all the parts, the mechanical functionality of the unit seems to in fine working order. I wanted to verify that it was just the dust and seal failures that initially caused the organ to malfunction, as the fan turns on, runs consistently, and turns off without issue. Using one of our Non-invasive current sensors, a quick check shows the motor is running in spec, at about 0.4 Amps.

With it all cleaned, I reassembled the insides and sealed the edges to prevent leaks on the airflow. It works great! 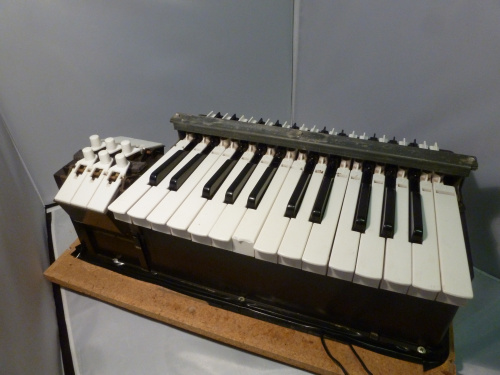 Look at those clean (plastic) ivories.

Because I originally expected to have a lot of electronics to deal with on the guts of this thing, I was expecting to be pretty limited on the type of hacking I could do. However, now seeing a) how much space there is internally, and b) understanding that I just need to keep the airflow from the fan going properly, I'm overwhelmed with ideas of what I could add. Perhaps a capacitive sensor breakout that will trigger lights to blink as the keys are played? A pressure sensor on a few keys that will determine motor speeds depending on the intensity of the user playing it? Hook it up to the internet, throw in a few solenoids and create my very own player organ? The possibilities are endless!

If you've ever hacked an organ, or any other wind instrument (accordion anyone?), we'd love to hear what mods you made. Leave us a comment below!