Wherein I take a break from pushing pixels around to wire my biker scout trooper helmet for sound.

It should come as no surprise that a lot of us here at SparkFun are huge Star Wars fans. Huge. And not just in an, "I know how to properly spell 'Wookiee' and own a pair of socks with Threepio on them" sort of way. Huge as in, "I can't go within 500 feet of Skywalker Ranch because of some remarks I made in 1999" sort of way. Regardless how huge a fan of the Star Wars franchise I personally am, SparkFun is a fantastic workplace for someone like myself to nurture their inner nerf herder and really take a passion project to the next level.

Surprising no one, I have spent the last 14 months constructing a screen-accurate suit of "Return of the Jedi" biker scout trooper armor. "Why?" you ask? Well, there comes a time in a person's life when he or she realizes they have the resources and support to just put the action figures away and become an action figure themselves, okay? Dumb question. 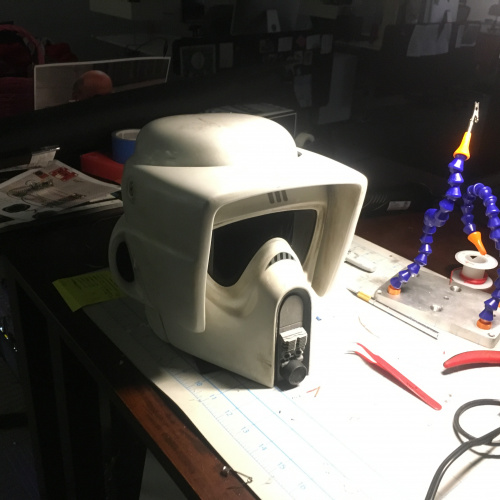 A lot of troopers use a sound system to make their voice sound more, well, imperial. Inside, the helmet tends to make your normal speaking voice sound like you have a mouthful of Peeps and your head in a bucket. Point is, adding a microphone and speaker not only helps you to be heard by others, but it also adds that mechanical stormtrooper crackle to it. Some even go so far as to add a squelch break or "static burst" before and after they speak. Most use an inexpensive personal amplifier (similar to the type tour guides use) made by Aker, and typically those that have a static burst function use a device called iComm.

Both are superb products but they have one annoying flaw. They're not actually INSIDE the helmet, are they? The mic headset line has to be concealed inside your suit and no matter how hard you try, even the most well-delivered, "These aren't the droids we're looking for" sounds like it's coming from your chest plate instead of your face hole. Disaster! My quest: Cram all that tech on the inside of the helmet without sacrificing too much functionality, whilst preserving its screen-accurate appearance, and also do it in time for Halloween. 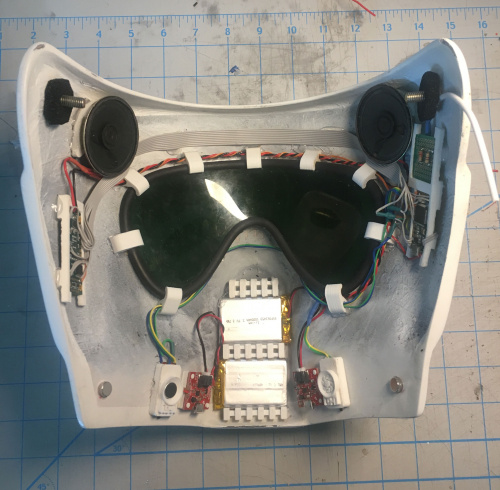 I already had a willing helmet, so the next step was figuring out an appropriate circuit. Back in September, Shawn made a project using the Prop Shield and Teensy 3.2 to demonstrate their ability to process sound and I sez to myself, I sez:

"I bet it wouldn't take much to fork that bad boy right up into that helmet." 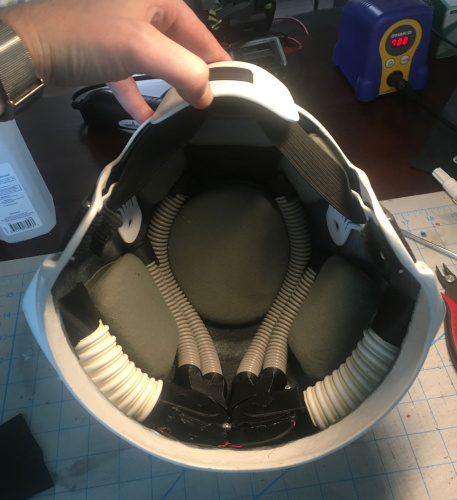 The main helmet with ducted fans.

A month later and with no small amount of guidance and patience from Shawn, I give you what we're calling "Vox Imperium" – my very own in-helmet stormtrooper voice processing system. Bonus round: I put some fans in there too so I'll die of heat exhaustion slower.

Check out Shawn's detailed tutorial, and may the force be ever in your favor.

P.S.: If you're looking for more information on building your own stormtrooper armor, I implore you to contact your local chapter of the 501st Legion, or seek answers from deep within the fantastic pit of money, time, and Bondo that is the Replica Prop Forum. Happy trooping!