I'm not exactly sure why, but I've had an interest in clocks for a while now. A few years ago, I designed a nixie tube clock with an ATmega328 and ESP8266. Due to discrepancies between the defined clock speed and actual clock speed, the ESP8266 connected to a Network Time Protocol (NTP) server was cheaper to implement than using an RTC. 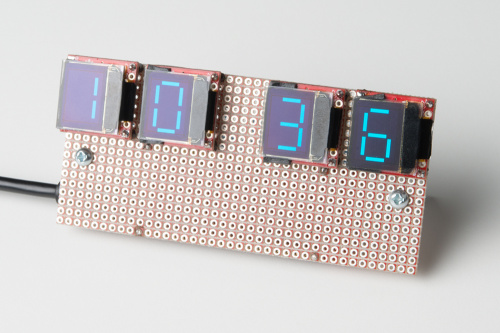 Nixie tubes came into existence during the time of vacuum tubes and before LEDs (at least in the context of the Soviet Union). Once LED technology made its way into the USSR, nixie tubes began to fade out. Even today when shopping for nixie tubes online, all of the tubes I've purchased have been sent from either Russia or Ukraine. It seemed fitting that I would follow in history's footsteps and switch over to the cheaper, easier and safer LED technology (I may or may not have shocked myself a few times on the 170VDC supply when testing). 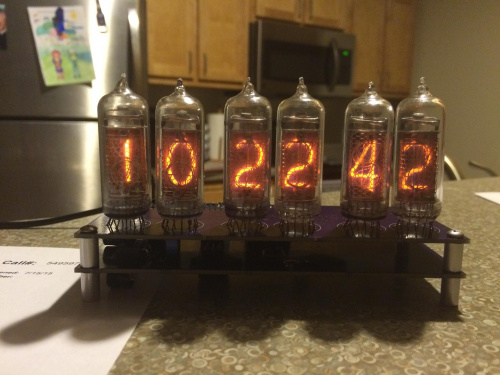 Seven-segment displays would be a great solution, but those are a dime a dozen today. I wanted something different, something that you don't really see commercially. As a programmer, binary clocks interested me, but I really wanted to stick with a digital display and kept going back to the 7-segment variety.

Using our OLED breakout allowed me to recreate the look of a 7-segment display, but I can add animations when the digits change. I added animations that make the individual segments drop in and fall off of the display when the time changes.

In my old clock, I first tried having the ESP8266 control both the WiFi and the nixie tubes, but the WiFi stack was just too large to avoid seeing the multiplexed nixie tubes flicker any time the 8266 needed to do something WiFi-related. This meant that I had to have two controllers on the board; an ATmega328 would handle the nixies, and the ESP8266 would be responsible for the time and web GUI for settings. When the SparkFun ESP32 Thing was announced, having two cores --- one to handle the WiFi stack and the other for programming --- I immediately thought of my clock and how much easier it would be to just have one device to program and not worry about how I would transfer information between the two.

Where the Clock Stands

Currently, the clock is still a work in progress. Right now, the code requires hard coding the SSID and password for the wireless access point. I really liked the web GUI I made, which I can access from the ESP8266 to change settings for the access point's SSID and password or to select the NTP server location, time zone and whether or not to adjust for daylight saving time. 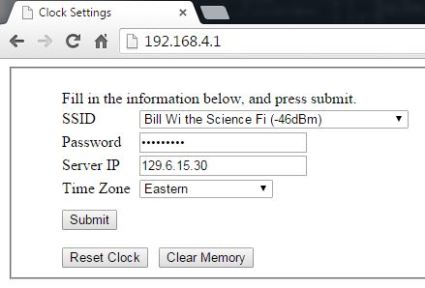 I haven't been able to implement the GUI quite yet due to library changes in WiFi.h to serve web pages, and this is where I could use some help. If you've made a web server for your ESP32, please let me know how you handled multiple pages. I've been scratching my head throughout the build on how to get this done. With the ESP8266, there's on(const String &uri, handler function), but that seems to have been removed on the ESP32.

The second problem with both clocks is how I handle daylight saving. Currently with the nixie clock, I have a selection box that removes an hour, but I would like to have that happen automatically. The NTP time returned will allow me to figure out the date, but given that daylight saving time begins on the second Sunday of March and ends on the first Sunday of November, how would you efficiently program in that functionality?

The clock is far from finished, and aside from the problems I've mentioned above, there are some minor things I would like to touch up and a couple of extra features I'd like to add. If you'd like to check out my code as is, you can view it on my GitHub here. If you'd like to build your own, the parts I used are in the wishlist below.