Let's look back at our best AVC yet!

It’s been two weeks since the best weekend of the year: SparkFun Autonomous Vehicle Competition 2017. We had a record-breaking 192 bots and vehicles entered to compete. We had three fires in the combat bots arenas (and a couple cranky fire marshals), so overall the event was a huge success.

This was truly a fantastic year for our AVC. So much happened, but frankly we could never have made such a splash without our classic AVC course designer, Evan, as well as Casey, our Combat Bot Captain. Let's hear from them about what they did for the 9th annual AVC:

Find out everything you need to know about the Classic AVC.
You've seen them on television, but now you can see how we set up our Combat Bots competitions.

It's definitely one thing to hear from the people who put their blood, sweat and tears into making AVC 2017 an amazing event, but what about those who actually competed? Let's hear from them now!

Jesse went on to win not only the Speed Demon Class with his bot "JRover Maxx," but also the Logistics class with "Isn't On Fire (YET)!"
This was Red Canyon High School's first year competing in the AVC!

Curious about who else took home a prize? See our lists of winners for AVC and Combat Bots on the AVC homepage!

Now, here are some highlights from some of our judges:

“Georgia Tech showing everybody how it's done. They got two laps easily done in Car Wars and proved to me that not only is the contest viable, but we'll need to make it harder next time.” - Pete

“I've gotta give a shout out to Jesse Brockmann for being the only contestant to attempt the (quite difficult) Logistics Class!” - Shawn

“Two young women from a local high school walking up to the big ring with a bot they built. The bot got destroyed in like 30 seconds. They came back two hours later with it set up like a suicide unicorn with a big joust pole made from the broken parts mounted to it. This, my friends, is project-based engineering.” - Jeff

“There was an AVC bot that, on two separate runs, successfully avoided hitting Kirk and, both times, changed its mind, does a 180 and goes for the jugular.” - Other Pete

“When we told the young driver of the Plastic Ant division that he had won, he was excited. We asked if he knew what the prize was, and he said no, but got a little more excited. (Sometimes when you spend long enough on the project, you forget that there might be a prize at the end, beyond the satisfaction of standing atop the podium.) When we told him it was a 3D printer, I thought he was going to vibrate until he exploded! It was that 'I'm so excited I'm about to burst but I have to keep a cool exterior' thing, and it was wonderful to see.” - Rob

Last up today we would like to bring attention to the AVC 2017 t-shirts we just made available! 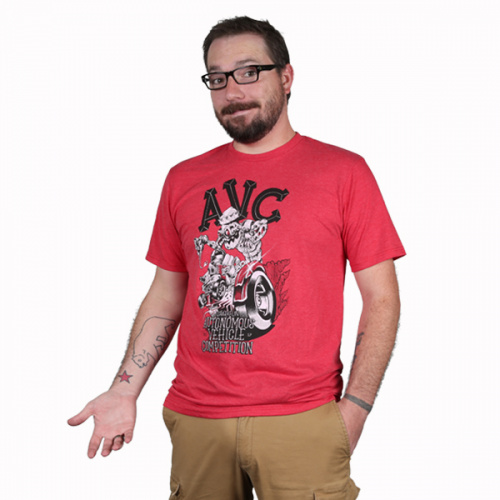 Were you not able to make it to the Autonomous Vehicle Competition ([AVC](https://avc.sparkfun.com/)) at Maker Faire® Denver…

Were you not able to make it to the AVC this year? Or maybe you made it and just weren’t able to get to our merch tent? Good news! For everyone who attended or wanted to attend our AVC and Battle Bots competitions, you can still get a shirt that says you were (or wanted to be) there! This large, lightweight red heather T-shirt proudly displays “Auto,” the robotic warlord of the AVC track.

These shirts do run small, so you may need to purchase a size larger to fit. We also offer this shirt in small, medium, XL and XXL.

We’d like to sincerely thank all of our competitors as well as our friends at Maker Faire Denver for their contribution to our largest and and most exciting AVC yet.