SparkFun partners with the LA Philharmonic for its first-ever music hackathon.

Representatives from SparkFun recently traveled to the Walt Disney Concert Hall to surround themselves with the sounds, sights and vibes of musical innovation at the LA Philharmonic’s first-ever hackathon.

At Hack Music LA, a total of 75 participants were selected from a national pool of undergrads, graduate students and early career professionals to “imagine and create tools or experiences that expand physical or emotional access to music, and in doing so, expand emotional access to others.”

A key theme of Hack Music LA was “Music for All.” The hackathon is just part of a technology and innovation initiative involving partnerships with music, tech and VR/AR companies, including SparkFun, Oculus, Amazon, Kickstarter and Techstars Music, to name a few.

The LA Philharmonic states that the goal of this initiative is “to inspire our participants and the national creative community to use technology to create not only new music, but ever more immersive and multisensory artistic experiences that ALL people can access” — a mission that resonates with SparkFun’s commitment to education and open source technology. 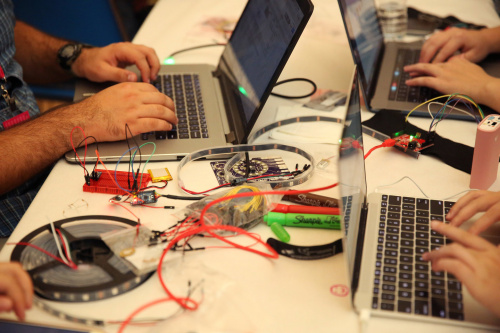 A Hack Music LA team uses a LilyPad ProtoSnap Plus and other SparkFun hardware to prototype Auraluminescence.

Event organizers connected with SparkFun through a mutual contact at University of Southern California Games, one of their higher-education partners, along with USC Iovine and Young Academy, USC Thornton School of Music, USC Marshall School of Business, CalArts, Cal State LA and the Colburn School. SparkFun Education and E-Textiles Product Manager Angela Sheehan brought LilyPad hardware for teams to experiment with and was on deck during the hackathon to answer technical questions. 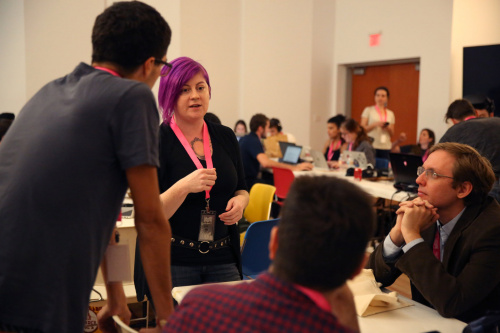 Two of the teams that chose to prototype with SparkFun components made it to the final 10 in the hackathon judging: Orchestral Motion and Auraluminescence. (See presentations from all finalists on Hack Music LA's livestream recording.) 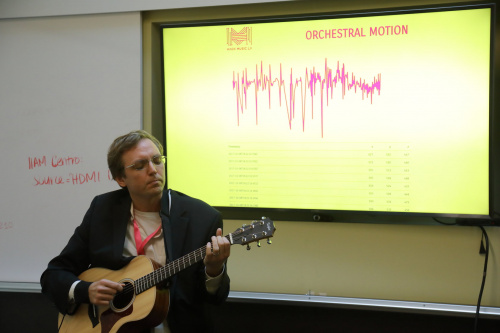 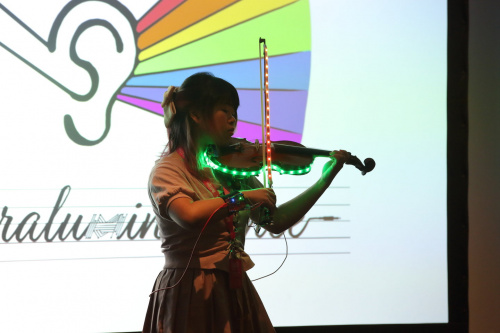 Auraluminescence uses LEDs that react to the music being played, adding another dimension to the performance. The team decked out the violin and bow of Bing Wang, a Hack Music LA mentor from the LA Phil, with LEDs for their demo. Sensors measured both the frequencies of the notes played and the velocity of the bow, and the LEDs changed based on that data. The result was a multisensory experience with sound, color and light working together to connect with audiences in a more visual way.

And that’s what Hack Music LA was all about — finding new ways to connect people with music, and with one another.

“There are so many ways that we divide ourselves, and music is one of those things that can bring people together,” said Molly Barnes, Hack Music LA Program Manager. “Music for centuries has been part of community. You can make music alone, but you can make even better music as a group.”

The winning team in the hackathon, Bouncewav, created a web-based platform that would make everyone experiencing a performance — whether live or recorded — feel like part of the group. The app created motion-controlled interactive sound on mobile devices so the audience could interact with the music by adding their own sound to the performance.

“I never thought I’d be that excited to play a triangle on my phone during a performance,” said Barnes. “We’ve been clapping for how many years, and that’s the way we interacted before.”

The Bouncewav team was awarded $2,500 and the opportunity to develop their idea with the LA Philharmonic for its centennial season in 2018–2019. Conductor Gustavo Dudamel, who believes strongly in music’s ability to unite and inspire, is always seeking ways to expand access to the orchestra for musicians and audiences alike. Inspired by working with young people in his native Venezuela, he founded the Youth Orchestra LA (YOLA) program to provide instruments, musical instruction and support to students from underserved neighborhoods. Through efforts such as this and Hack Music LA, the LA Philharmonic will continue to find new ways to harness the power of community and technology to expand “Music for All.” 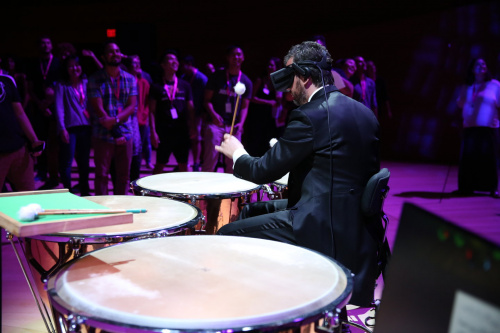 Hack Music LA sponsor Oculus donated VR headsets for hackers to use when creating their experiences. Here Joseph Pereira, timpani player for the LA Philharmonic, gives an interactive performance, where the audience can see on a projector the virtual reality scene the drummer is seeing – and influencing – as he plays. The winner of the Oculus and Amazon prizes was Maestro, a VR application that lets people take the conductor’s stand.

Have a cool music hack you'd like to share? Can you think of a way to use technology to increase access to music or enhance the musical experience? Share your ideas in the comments below.