Harris Kenny of Aleph Objects shares some history and philosophy behind the success story that is the Lulzbot line of 3D printers.

Greetings! We spout off to you about the open source way of life fairly frequently, don’t we? Well, rather than beat you with our own opinions on the subject yet again, today we have an interview with the president of one of the premier open source companies of our time, Harris Kenny of Aleph Objects, makers of the LulzBot line of 3D printers.

Pete: Sir, please state your name, your company, position and the duration of your employment here.

Harris: Harris Kenny, President of Aleph Objects, Inc., and I started working for the company in January 2014.

Pete: Cool. At what point in the history of the company was the call made to be open source? When did you decide that was going to be the way?

Harris: The company’s founder, Jeff Moe, committed to Free Software, Libre Innovation and open source hardware from the beginning. The company’s goal is to advance technology that respects user freedom. Aleph Objects runs on this technology, from the ERP system (Odoo Community Association) to the workstations (Debian GNU/Linux). The company is working to emulate the success of the Free Software community, applied to hardware. We also make software like Cura LulzBot Edition.

Pete: Okay, got it. How has the choice to be open sourced played out for the success of the company?

Harris: The company’s first product line is the LulzBot line of desktop 3D printers. It benefited from an established and growing Free/Libre/Open Source community in the RepRap project, which started at the University of Bath in England and took off around the world. Without RepRap, the Free Software Foundation and all the preceding projects, it would not have been possible to start this company.

Being open has benefited the business in a lot of other ways too. The company is able to stay on the bleeding edge of 3D printing technology development, adopting the best ideas in the industry and sharing our ideas. The organization has a very “flat” structure when it comes to R&D. Ideas and testing come internally across the company, from customers, from suppliers and from other communities. This helps drive innovation and make the best products for users.

Pete: Okay, let’s riff off that just a little bit and back up. Who would you say is your primary competition?

Harris: There are a few different ways to think about our competition. 3D printing is a fabrication technology, a way of making physical things. For people who are adopting 3D printing as a technology, we are competing with other hardware and software companies. This includes more open companies like Prusa Research (Czech Republic) and BCN (Spain), as well as fully closed companies.

This is abstract, but we also compete with other ways of making things. In some industries, they have not adopted this technology yet and we are working with their early adopters to see the benefits. One example of this would be using 3D printing during the development process before having injection molds made, rather than doing multiple rounds of molds that take more time and cost more money.

Pete: As you are creating new source material and releasing it immediately, are you a little bit afraid of tipping off the competition as to what’s coming next from you and having them take your material?

I can’t point to a single case where this has hurt the business. The business benefits from competitors who have learned from us and share that work back with the community. One example of this is PEI print surface. Using PEI as a print surface originated in the community. We were the first company to support PEI out of the box standard. Others have followed suit and are developing and sharing their own implementations. This moves the technology forward and is a good thing.

The company does have competitors who have been unsuccessful in emulating some ideas. One competitor tried to close their derivative of one of our designs off. Meanwhile we moved forward with new and better designs, and are about to move yet another generation ahead for that component, while they are stuck in the past.

This is like in Free Software, where there is a graveyard of failed closed forks of projects, while the main upstream projects thrive years and decades later. Our concern is the opposite (of fear of tipping off competitors). How can we be more effective in sharing our upstream work — before it’s released — to make it better? One example is that we have had customers make our products on their own using our development source code before we even released them. They provided feedback and gave us ways to make it better.

For anyone who wants to learn more: We publish work-in-progress source here and here. Assembly instructions are published here. Final and stable source code is published here.

Pete: Do you have any plans to release anything in the future that you would consider closed? Anything that you try to protect?

Harris: We would never do this as a company. On the contrary, we are working to advance technology that respects user freedom. As our products evolve, we are pushing into new areas and sharing that work. We are also working with suppliers who are freely licensing their work for the first time. For example, earlier this year IC3D received Open Source Hardware Certification on their ABS filament (US000066).

Pete: There are degrees of openness. What do you consider the primary qualifications for a company to call itself open?

To be clear, by freely licensed products I mean that the full source code is available upon release (the earlier it’s released in development, the better) and that those products meet the Free Software Definition and Open Source Hardware Definition. I extend this to internal operations as well because those source files, when released, are ideally accessible using Free Software.

There is also openness in terms of transparency about the business, its operations, its culture, etc. There are certain things that we do not talk about as a company related to Human Resources and customers, due to individual privacy reasons. Beyond that, we offer public tours and want people to understand how our business operates.

Outside of technology, I think there is a larger trend toward openness in business in general, as seen in the push for supply chain transparency in the Food and Beverage industry, for example. 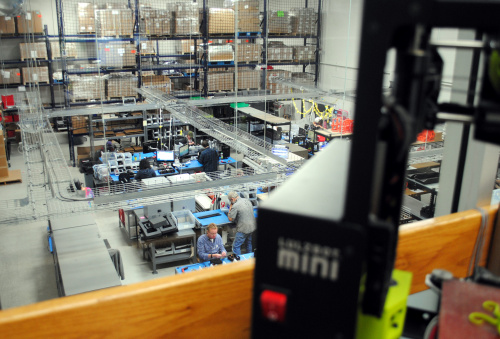 Pete: But then again as the company grows and you look at taking on investment possibly or selling the company, there’s the question of intellectual property. And if you don’t have any of that, what do you have to offer, right? It’s going to be your community and your stock and basically your recurring revenue. But you don’t have anything protecting you?

Harris: The company does have registered trademarks, which is a conventional protection to ensure people know its products and prevent confusion in the marketplace. The company also has free licenses protecting designs and other works. The company publishes early and often to establish prior art, shared under copyleft licenses that necessitate re-sharing of derived works. By using primarily CC BY-SA 4.0 International and GNU GPLv3 licenses, we protect the ability to keep that work freely licensed, and if others derive works from it we can learn from and re-incorporate their improvements.

In the long run, the company’s only “protection” is maintaining high quality products and support, developing new products, listening to users, developing a strong brand, and marketing and selling products in ways that resonate. Nate (Seidle, founder of SparkFun) gave a great TEDx talk about this a few years ago that he presented at the Red Hat Summit. This is one of the on-boarding videos we have new hires at Aleph Objects watch when they join the team to learn about this open business model approach.

Any kind of investors, strategic partners, etc. would need to fully understand the business model and want to invest in it specifically. These business practices are embedded into the DNA of the company. Without them, it is extremely difficult to imagine the company succeeding in the long run. Our users, community, partners and employees are deeply committed to these values.

Pete: Do you see limitations to being open? Said another way, are there fields of manufacturing that you would recognize as being difficult to maintain an open business model?

Harris: I think the typically cited benefits of a closed model are more than offset by the benefits of an open model. So, the first step is building the business in a way that capitalizes on those benefits of openness. This is a continuous process as one grows the organization, not just a one-time thing.

Beyond that, the main challenges open businesses face are no different than every business (open or closed). It’s about creating value for users, developing a strong culture and executing.

Just to give a few examples: professional-grade cinema tools like AXIOM, educational projects like sino:bit and medical device research like OpenBCI. There are a lot of people finding ways to make this work in interesting ways.

It is a little more interesting in some areas that have been historically closed and don’t seem likely to open things up any time soon, but we are selling them a product that is open and getting exposure that way, which is a start.

Pete: Does open source have any applications there? For example, years ago I used to get phone calls from this clandestine group within Analog Devices, where they would say they really loved SparkFun and wanted the open model there, “but we’re a rogue group inside here and we’re trying to convince other people.” And of course, Analog Devices is a company that’s huge and they largely don’t see an application for being open at all. So within the realm of other electronic industries or any industry, where would it lend itself? Or where would it not?

Harris: On the one hand, incentives can motivate companies to be open. On the other hand, there is a long-term goal to advance the philosophy and ethics of user freedom. There are many examples of companies taking an open approach, despite operating in closed industries or categories.

Open Compute, for example, has made dramatic progress over the last five years and is an example of a technology category turning in the direction of openness. RISC-V is a technology that has massive potential in a historically closed category. BeagleBoard is another example, designed by Texas Instruments, which we use to run our cluster of 3D printers.

With our LulzBot brand, we recently partnered with OtterBox, who freely licensed design files for their uniVERSE case system. We have also partnered with Eastman Chemical Company, who is releasing innovative Amphora materials meeting open filament standards.

All of these examples are thanks to progress over decades, and specific credit goes to individuals within those organizations who championed these projects. As successful as companies like Red Hat have been, we are still in the early days of open business models and many companies are not there yet.

Pete: I think a fundamental cultural change would be necessary.

Harris: I agree. I think that cultural change is being driven by a combination of start-ups and established companies. The ecosystem is also developing to facilitate this change, including educational institutions, tool chains, infrastructure and people. It is a long game.