Desk of an Engineer: the Pete Edition

Not even the good Dokter is safe.

We're back with more desk details! This is Part Five in a series where we barge in on our engineers while they’re working and kick them out so we can document their desks in all their chaotic glory. And because we know that just isn’t enough information, we ransom their offices back to them in exchange for some details on what they have on their desks and why. We do this for you!

Clicking the image will enlarge it, so you can experience the full resolution of each engineer’s home away from home.

Today's victim: the one and only Pete Dokter. Let's get right into it. 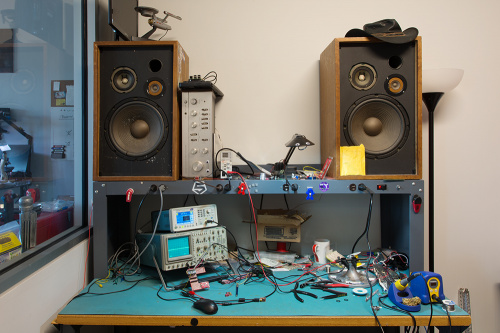 Jeez, what a mess. About once every three months, I’ll get nuts and drop everything to clean and organize my workspace. Today’s clearly not that day.

This is one of three workable horizontal surfaces. The most obvious features here are the speakers and the Kenwood KA-4006. Music features prominently in pretty much everything I do, and I rarely work without it. Headphones? Nope, gotta be able to move around. My favored genre tends toward stoner/psychedelic (check out the channel “Stoned Meadow of Doom” on YouTube), but I’ve also been listening to the Delvon Lamarr Organ Trio a lot lately. The right music is critical. 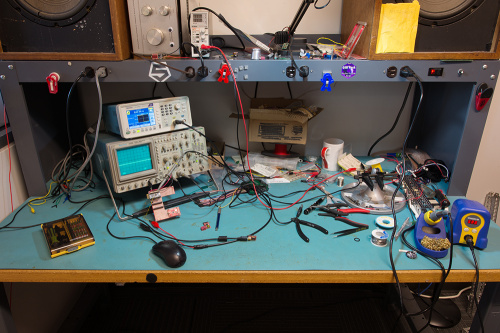 Upon closer inspection… needs more lights. There’s one small fluorescent on the shelf (center, poking up out of the pic) that does the job, but I could always use more. Instruments tend toward the left, with my laptop usually occupying the left-most corner of the bench. The scope is a Tektronix 2247A, the signal generator on top of it is a Tektronix AFG1022 (swiped from Alex last week, I’m gonna have to return that), and an Extech power supply on the shelf above. There’s also an Analog Discovery 2 USB scope in just about the dead center of the pic. That’s a super handy piece of gear, and it travels better than the big scope.

My iron and hand tools tend toward the right side (but they’re starting to creep over), and semi-random parts up the middle. In the very middle, in the back, is a segmented box of parts - caps and resistors of various useful values, all 0603, some regs and mosfets as well - with a roll of red wire-wrap wire on top of it, then another cardboard box on top of that filled with a bunch of other build parts, all through-hole. There’s another box peeking out from behind the scope that’s got screws, nuts, washers, standoffs… all the mechanical junk I’m likely to need to build something. And if it’s not there, there’s a stash of parts outside my office that I can raid. The coffee cup? More parts.

Last is the board vice, close to my iron. I use that thing pretty much every day. Back in the day, I used to just pin stuff down with a roll of solder or whatever other heavy thing I had lying around. That’s just one random element I can do without these days. 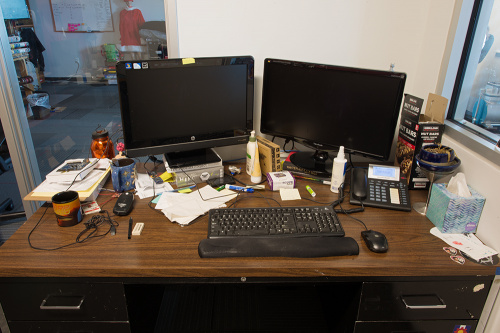 Second horizontal work surface. From left to right, a small pile of docs and parts, a couple of coffee cups, computer, disused telephone, big box of granola bars and a plant that Feldi gave me that, apparently, I’m too self-absorbed to care for cuz it’s dead, dead, dead. I’m sorry Feldi, I have shamed myself. Under the box of Kleenex is a drawing my son made for me a bunch of years ago that I recently found. It says “I [heart] U” on one side, and on the other is a stick figure of me with a gold trophy that says “100” on it. I guess that’s me in a nutshell.

I split programming and layout duties between my desktop and my laptop, which is an Asus gaming laptop (so fast, big screen and a full-sized keyboard). But I tend to do documentation and other writing on the desktop. 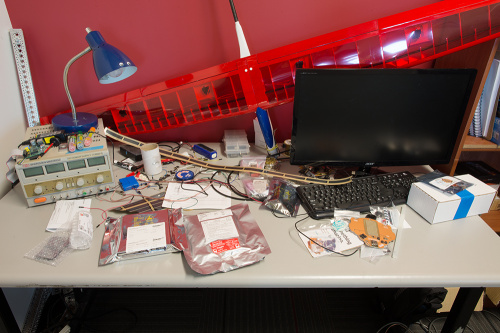 Last horizontal surface, and it’s mostly collecting junk right now. From left to right (generally, sorta), a broken power supply that works just enough to be useful, bunches of samples (including flexible solar panels, Invensense IMU’s, inductors, I think there’s a buck regulator in there too), one of Brian Benchoff’s boards (for Defcon?) that he gave me because it didn’t work, a keyboard and monitor from a Pi project I was doing, and… um… a glider. Sometimes I gotta go fly. That's it!

Thanks, Pete! You can have your office back now.