Let's continue with the crystal anniversary theme by looking at liquid crystals!

"Liquid crystal" is not a made up-term, but it probably seemed that way back in the 1880s when Austrian botanist and chemist Friedrich Reinitzer was experimenting with chemicals found in carrots and found that some had two melting points. Many years later, in the 1960s, RCA pursued liquid crystal as a display technology. As a result, we have the LCD to thank for the popularity of our common portable technology, like laptops and smartphones.

Twisted Nematic (TN) is a fascinating structure. "Nematic" refers to the state of the liquid crystal where the long axes of the crystals line up with each other. By sandwiching the nematic liquid crystal between two polarizing filters and twisting one of the filters 90 degrees, the TN structure would form, which is capable of twisting the polarization of light.

Interestingly, we can apply an electric field across the TN structure to cause it to break up (essentially untwisting). This, in turn, prevents light from passing through the second filter, as it is then off the polarization by 90 degrees. By controlling the voltage across the TN material, we can effectively control the amount of light flowing through an LCD segment.

Each subpixel on your LCD monitor works this way, with the addition of a red, green or blue color filter. Three subpixels (red, green and blue) make up one pixel, and by controlling the light through each subpixel, we can create almost any color we want. With millions of tiny pixels, we can render images, text, video, etc. 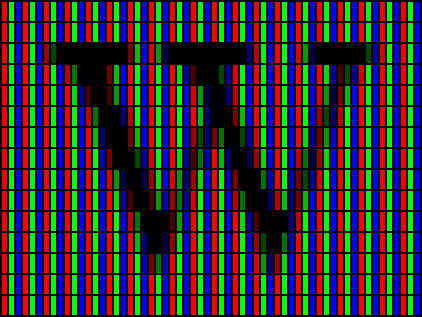 There are three different types of LCDs: reflective, transmissive and transflective. Most LCDs you come across, such as your computer or smartphone screen, are transmissive. Reflective LCDs require ambient light to be seen and can be found on things like inexpensive calculators. Finally, transflective screens can be viewed in ambient light and have an optional backlight. They are found on some automotive instrumentation and smart watches.

If you're curious, SparkFun has a collection of transmissive and transflective screens.

What have you used LCDs for on your projects? Is it to play games on the Raspberry Pi, show simple data from a sensor or create an interactive interface? Let us know in the comments below.