Team Hyperlynx designs an all-electric, autonomous modular vehicle that can transport passenger or cargo vessels at speeds up to 250 mph.

Andrew K. Gras, Electrical Lead for Team Hyperlynx at the University of Colorado–Denver, shares the story of what started as a mechanical engineering senior design project but has been established as a continuing campus organization. The team is currently building an autonomous vehicle for the 2019 SpaceX Hyperloop Pod Competition.

Team Hyperlynx is multidisciplinary, consisting of electrical engineering, mechanical engineering and computer science majors at CU Denver working together toward a common objective. Our entire team is made up of self-proclaimed space-nerds. A few of us actually ducked out of class early to watch the inaugural Falcon Heavy launch on February 6, 2018. If you weren’t able to watch the spectacle live, I would highly recommend checking out the video of the livestream (T-60 is at ~21:00).

One of the things that drives us as engineering students is being told “that’s too complicated” or “there’s no way you can make that work.” Both of these phrases push us to find clever solutions to what seem like insurmountable obstacles. When Elon Musk founded SpaceX and started boasting that they were going to land their boosters, the general response was both of the aforementioned phrases. SpaceX launching the most powerful operational rocket was absolutely a breath of inspiration and motivation for Team Hyperlynx. 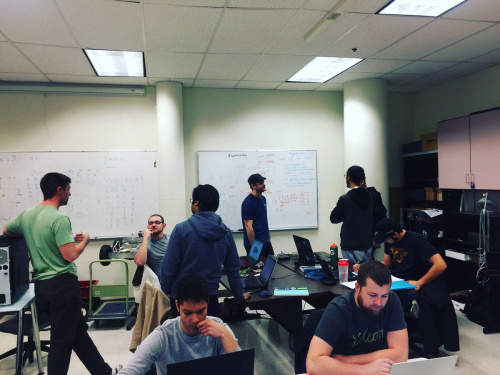 Team Hyperlynx working on the pod

Originally founded in 2015, Team Hyperlynx competed in the first annual SpaceX Hyperloop Pod Competition in January 2017. The competition brings teams from all over the world to compete in Hawthorne, California. In 2013 Elon Musk released his white paper on the Hyperloop, a network of tubes for “pods” to travel through at supersonic speeds, shortening commutes and reducing traffic across the globe.

About the Hyperloop Pod Competition

The SpaceX Hyperloop Pod Competition is essentially an autonomous drag race, with the second iteration scheduled for July 22, 2018. The rules of the competition are that the winner is the team that can achieve the highest top speed without crashing. SpaceX has constructed a 4,500-foot vacuum tube test track outside of their headquarters. It has an aluminum rail attached to steel sheets running down the center and is capable of having the atmosphere evacuated down to 0.125 psi. Outside of proven safety, there are no design constraints.

The original competition consisted of a mixture of designs that mostly fell into three categories: magnetic levitation, air-bearings and wheeled pods. Air-bearings operate using pressure vessels and compressed air to create a cushion of air for the vehicle to ride on, similar to the way an air-hockey table works. Magnetic levitation (mag-lev) creates repellant magnetic forces in the steel sheets to levitate the vehicles above the track, again creating an environment for near frictionless propulsion. Both methods are extremely complicated, costly and potentially dangerous.

One of the guiding principles for Team Hyperlynx has been: simple, fast, cheap. We do not take this to mean easy, slapped together and flimsy, but instead look at these as essential considerations for any acceptable, practical engineering project. With these principles in mind, the team has selected a wheeled pod for our design. While this limits the theoretical top speed, it also significantly reduces the cost, weight, complexity and power requirements for our vehicle.

The original white paper acknowledged that mag-lev was the most likely propulsion technology to be used to achieve supersonic, long-distance travel. In reality, pods will likely use a combination of wheels and mag-lev, possibly utilizing wheels during acceleration, braking and extra-tube operation and then retracting the wheels and operating with mag-lev during long-distance, high-speed sections. With all of this in mind, we are confident that our choice to build a wheeled pod for the competition has direct relevance when considering acceleration and braking of commercial pods in the future.

So how does SparkFun, one of our initial sponsors, fit into this picture? As mentioned earlier, the competition is for autonomous vehicles, meaning we are required to press a ‘GO’ button, then let the pod do the rest. Such a level of autonomy for a 700-pound vehicle requires an enormous amount of data collection, processing, validation and control, especially with our goal of 250 mph. One of the major components from SparkFun that has been integral to our development process is the Arduino Pro Micro 5V/16MHz board. We are using a USB-centered serial communication network, which requires sensor data to be obtained from sensors, then serially sent to a flight controller via USB at a goal rate of 60Hz. The Pro Micros have the smallest footprint available for a 5V/16MHz Arduino board, while still including a standard microUSB output onboard. In addition to the Arduino Pro Micro boards, SparkFun has provided us with many of the sensors that will feed our Flight Controller, including IR Temperature Sensors, Inertial Measurement Units, Sub-Network breakout boards and even inline voltage regulators. 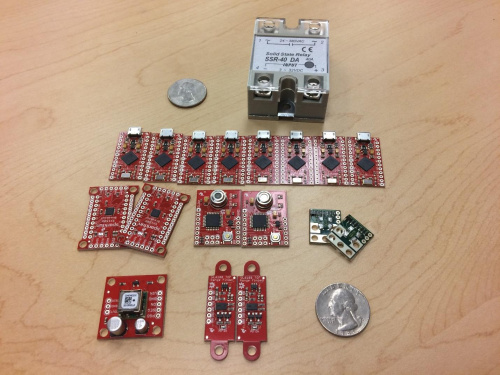 The actual competition is composed of essentially two parts, incredibly thorough testing and actual rolling “runs.” Thorough testing means roughly a week of questioning and reporting to SpaceX and Tesla engineers whose goal is to determine whether our vehicle is functioning correctly and safely. If we cannot prove that our pod is going to do what we say it’s going to do – when we tell it to – these engineers will find that out and prevent us from advancing to further tests. After proving that all of the electronics, mechanics, software and states are operating nominally, teams are approved to move onto a series of runs, starting with low-speed, advancing to medium speed – and if those go well, finally moving onto the coveted high-speed runs.

SpaceX is very picky about which organizations are approved to execute high-speed runs for several reasons. First, the tube is the third largest pressure vessel in the world and costs millions of dollars to construct – and there’s only one. Any damage to the tube is not only a direct cost to SpaceX but also hinders the opportunity for other teams to execute. Secondly, it takes roughly 45 minutes just to pump all of the atmosphere out of the 4,500-foot tube (~4,500-foot length and 6-foot diameter = roughly 127,000 cubic feet of tube to evacuate). The time required to evacuate in addition to the time required to fit each team’s pod to the rail and perform all necessary pre-flight inspections means that in a given day there is only enough time for two or three high-speed runs. 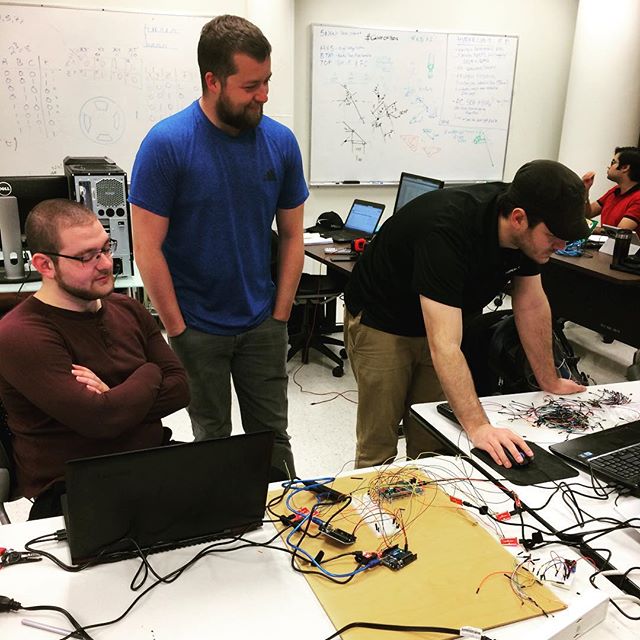 With all of these obstacles in mind, it is essential that Team Hyperlynx be able to empirically prove all aspects of our vehicle. Using SparkFun components, we have already been able to design and test many of the necessary sensor and control modules. While Team Hyperlynx will not be competing at the July 22, 2018, competition, we are already preparing for 2019. With a majority of our team entering their senior year, and with the support of our wonderful sponsors, we are working toward an impressive showing at the 2019 competition.